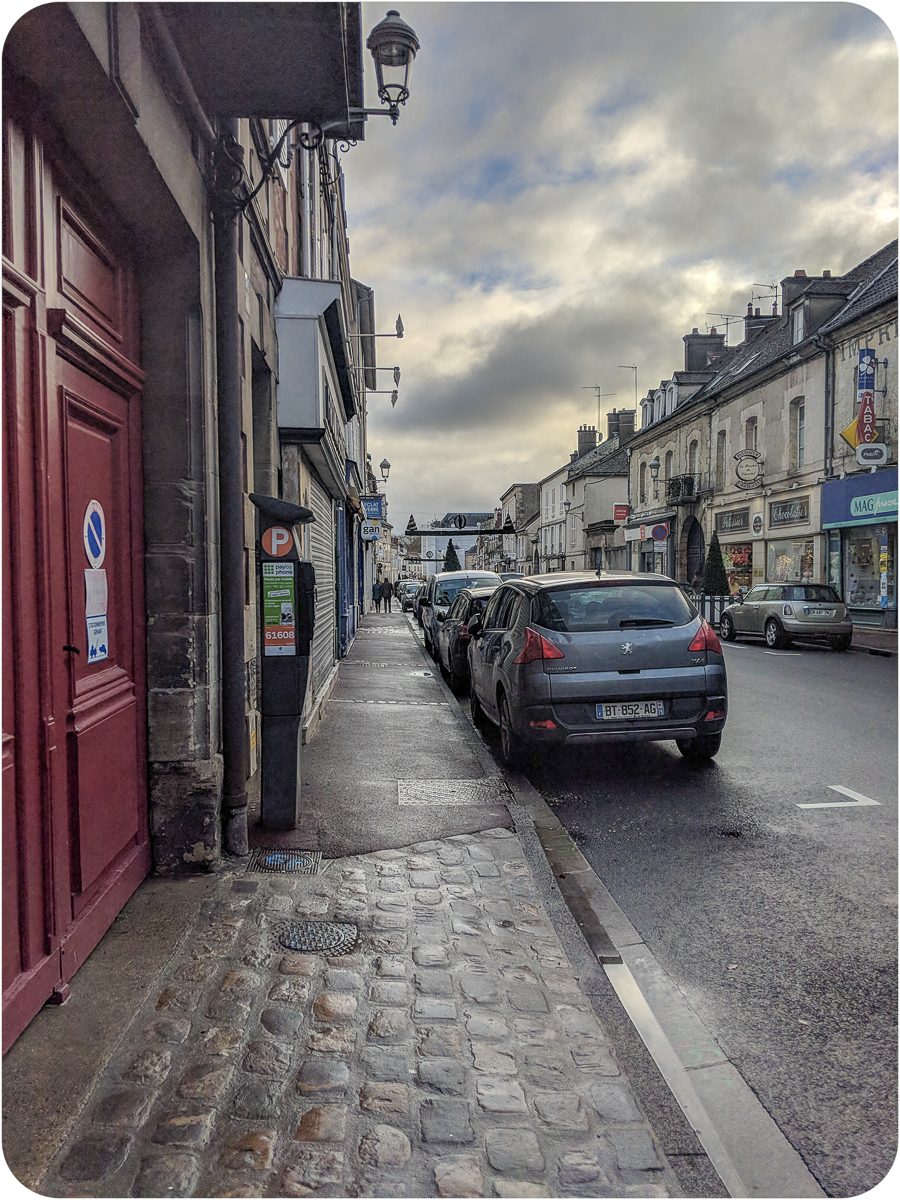 I bought a regular fare train ticket from Gare du Nord, and it wasn’t really evident upon boarding which seat section corresponded with that fare. I selected a row and then reconsidered, moving up a section past a minor partition, not wanting to be so near the bathroom, and hoping its proximity wasn’t what defined the fare structure. What I should have hoped for was one or two of my fellow passengers to oversleep and miss the train so they wouldn’t end up getting into a shouting, high-pitched and then muffled screaming fistfight in the row I’d vacated earlier. My seatback was to it so I mostly heard rather than saw the fight. It was surprisingly quiet on the train afterward. No one around me seemed inclined to offer up their take on current events, so I have no definitives and only wild guesses.

Some questions that I’d never bothered to consider before now: What if I hadn’t moved? Would the fight still have occurred? Was it about who had the worst seat versus the second worst seat? Alternate universe Melissa who did stay would almost certainly have been snitty about toilet smells but she wouldn’t know exactly how long a train could be held up at a station after two pugilists were dragged off by French police.

Our destination was Chantilly, a French commune 35 miles north of Paris on the border of the Chantilly forest with a population of eleven thousand, historically admired for their whipped cream and very fine black silk lace. Although I did hope to partake of some crème Chantilly during my visit, I was going there for horses. In addition to their famous hippodrome which hosts the prestigious Prix du Jockey Club (the French Derby), Chantilly is also home to the Museum of the Horse, located inside the Great Stables.

The Great Stables are the largest stables in Europe, with the capacity for over 200 horses.  200 horses in 2019 is a huge number of horses, and on days that I feed and turn in at my stable, I’m glad there’s never more than 17 (especially if the weather has ’em feeling snappy), but for historical perspective, in 1775, the Grand Equerry (the highest office for all matters relating to the royal horses), Charles Eugène of Lorraine and Prince of Lambesc was accused of misappropriating 120 of the king’s horses for his personal use. He took horses from work the way some people take pens. And still, those embezzled equines represented a mere 6% of the king’s total stock. A stable that holds 200 horses would barely accommodate Louis XVI’s benchwarmers. 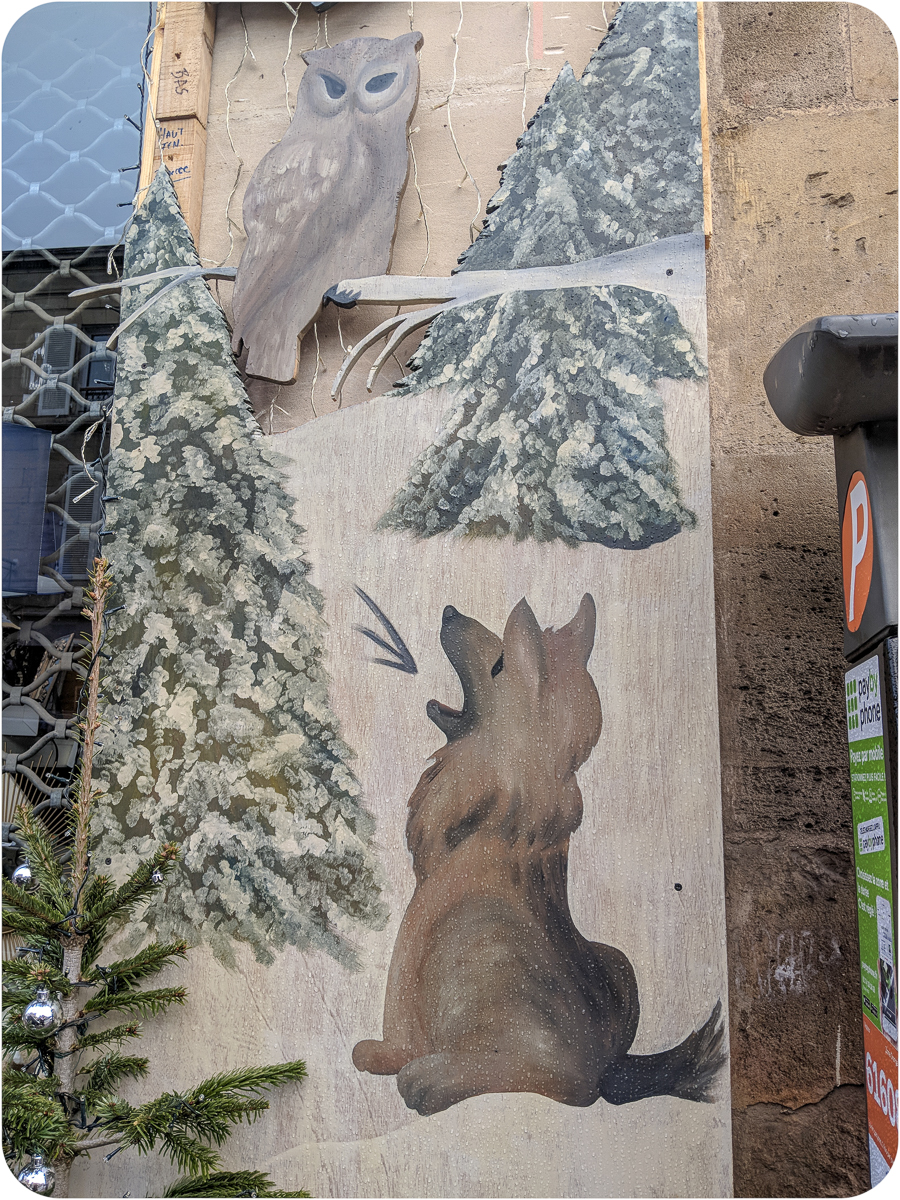 Located on the outskirts of the Domaine de Chantilly and across the street from the Great Stables was our hotel, the Auberge de Jeu de Paume, the little splurge of the trip. Our room looked out onto the gardens of the Domaine, less manicured and more forest-like than the term “garden” would lead one to believe, particularly in the royal French countryside. 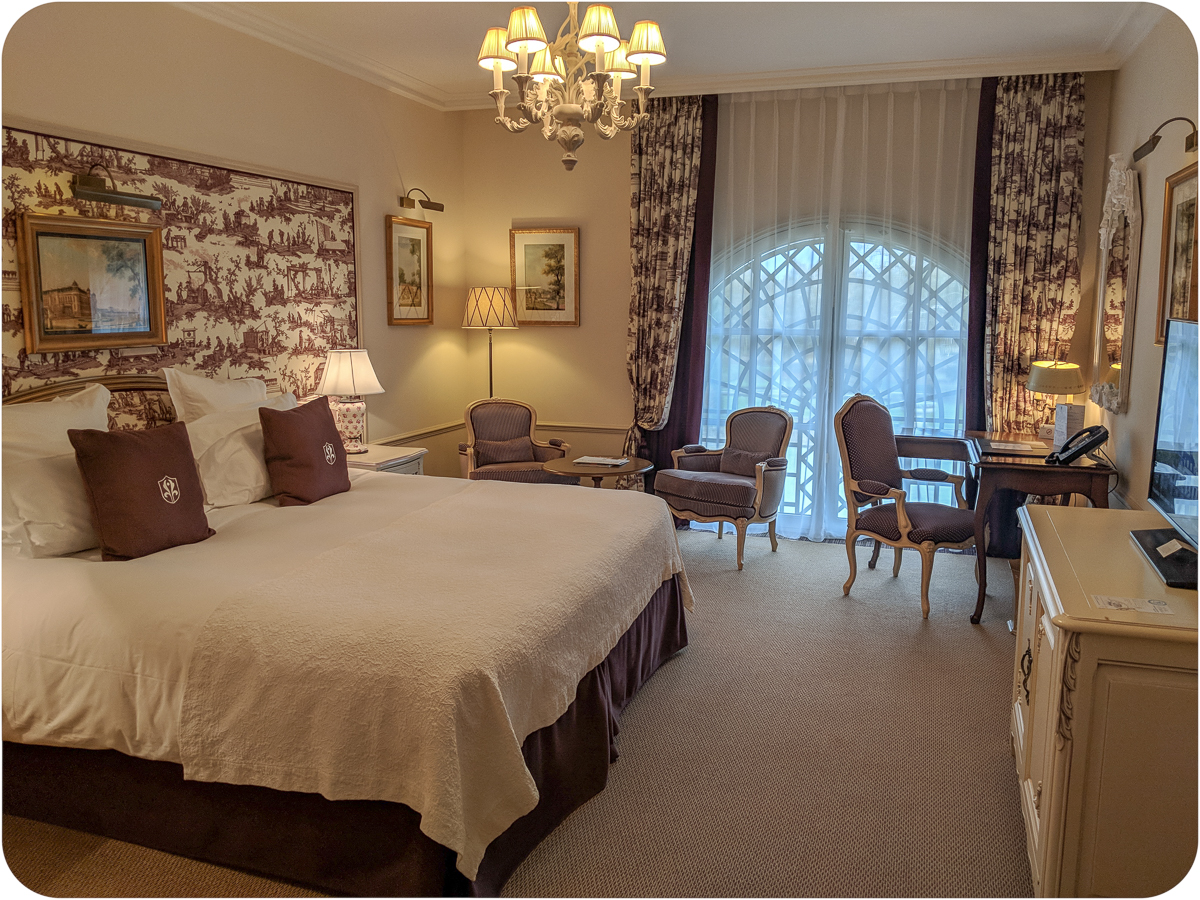 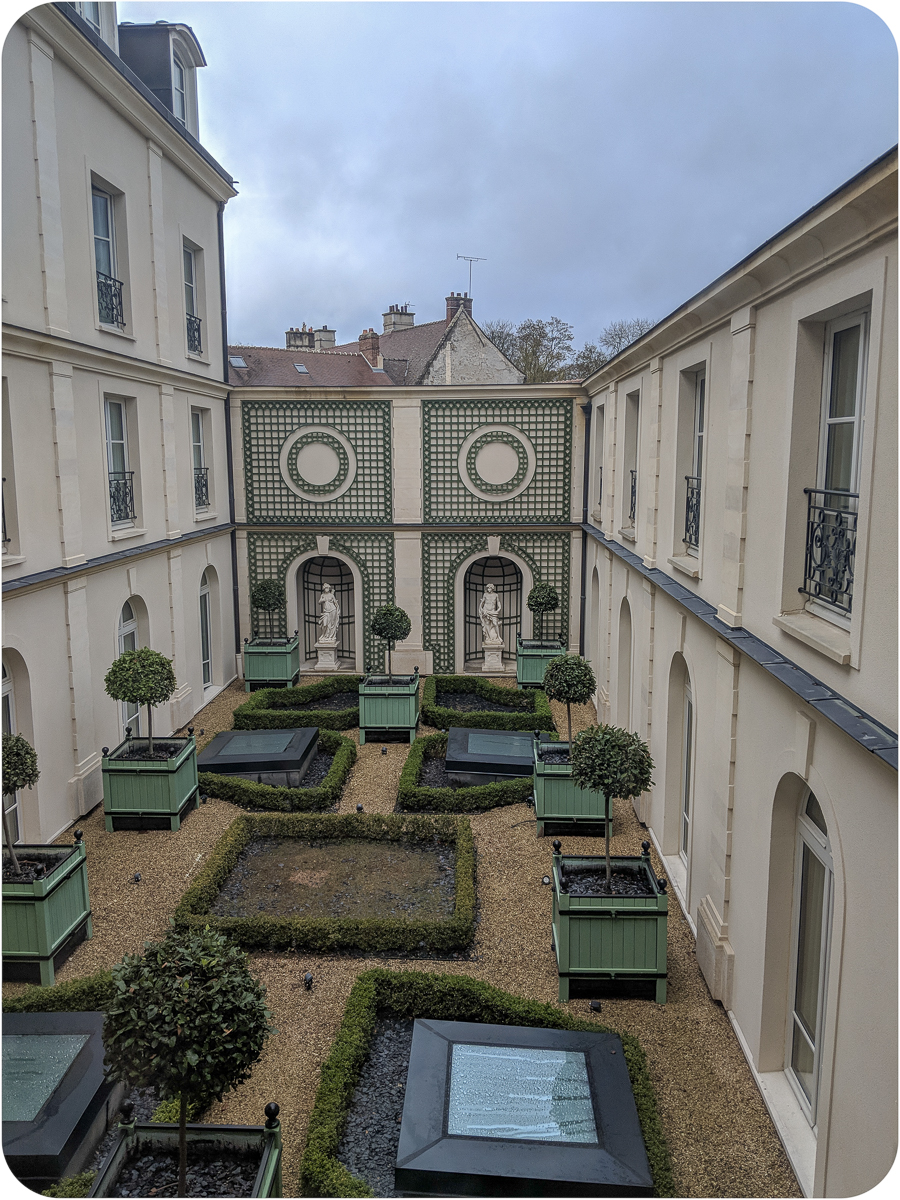 In my blog post about Versailles, I took a photo of a statue of Louis II de Bourbon, Prince of Condé, and said I didn’t know any historical tidbits about him and didn’t intend to look anything up but I thought his clothes would be appropriate for an excellent pirate. Well those words came back unexpectedly to bite me in the ass because as it turns out, the Domaine de Chantilly is Louis de Bourbon’s house and the Great Stables are his stables and a fun fact about him is that he had these amazing stables built because he believed that he was going to be reincarnated as a horse and wanted to make sure he’d be housed in facilities appropriate for a horse of his rank. I have many questions, none of which are answered by the historical record: Did Louis intend to allow himself to be ridden or did he assume he’d still be giving orders in some fashion? Did people working at the stables after his death have any guesses as to which one, if any, was the reincarnated prince? Did they geld him anyway? 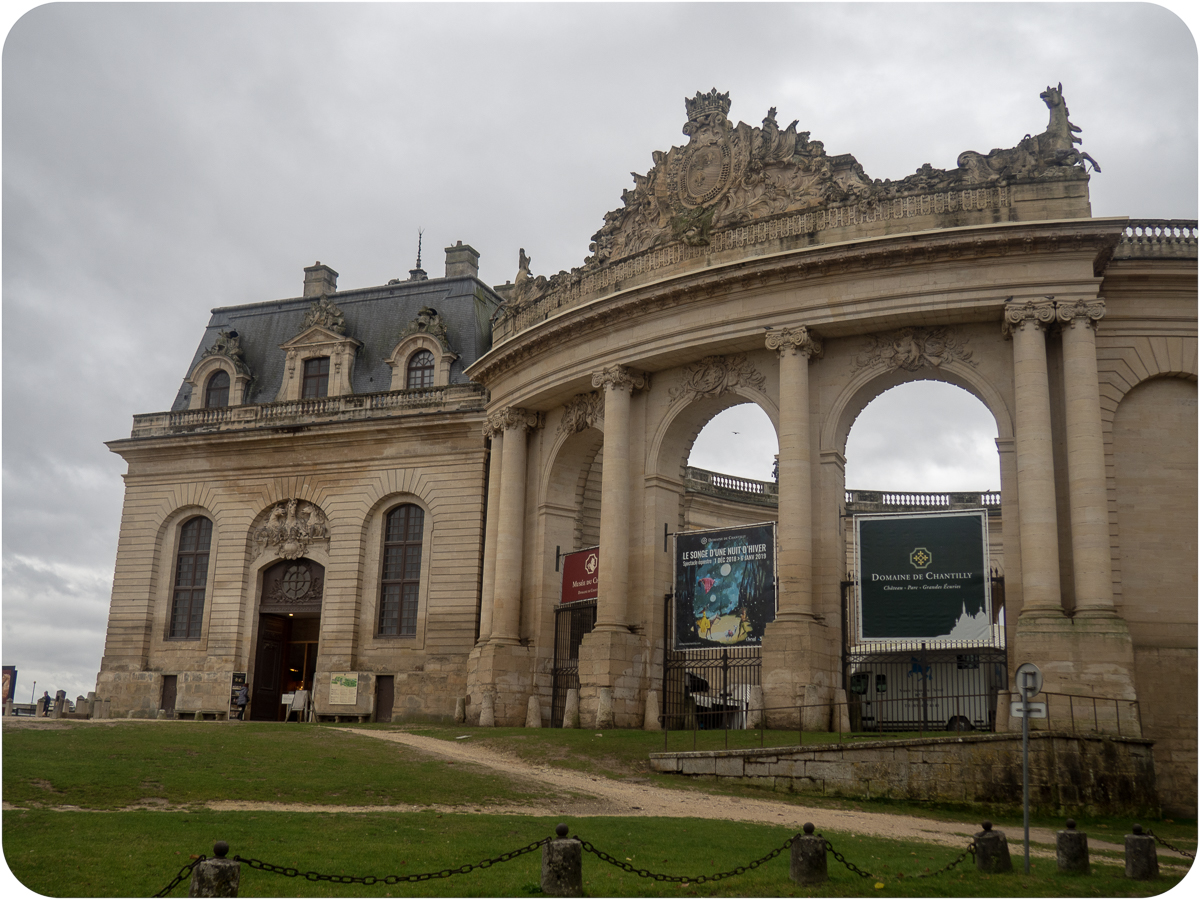 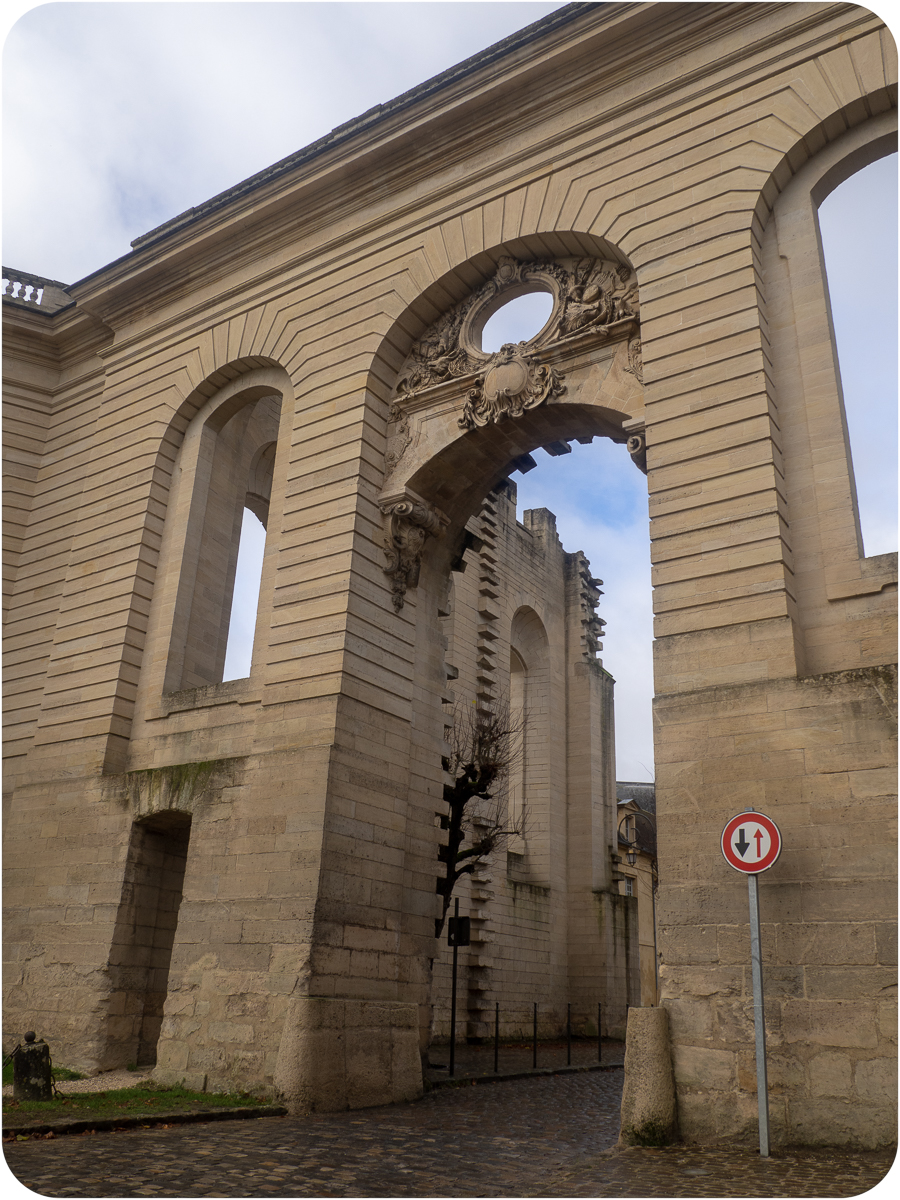 Built in 1719 by architect Jean Aubert, the Great Stables are nothing short of imposing. The stalls inside are flooded with natural light and the ceilings rise in a gentle cathedral arch. The entrance to the Museum of the Horse is located between a row of stalls containing full size horses and a row of half stalls for donkeys and miniatures, including one small shaggy shetland pony with long black hair and whiskers named Ramses le Grand.

Now, if I know anything about how reincarnation works (I don’t, nor does anyone else), you get to choose what you’re reincarnated as but due to the laws of physics you have to maintain the same relative amount of body mass, so if you’re a 150 pound man with a fondness for red squirrels, you’ll come back as 200 of them. If you’re a man with a fondness for horses…miniature horse weights range from 150-350 pounds. I’m not saying that this miniature horse with an important name, long black hair and whiskers is the reincarnation of  Louis II de Bourbon, Prince of Condé, a slim man with long black hair and whiskers, but I’m not NOT saying it.

I’m going to come back as two obese Chow dogs. 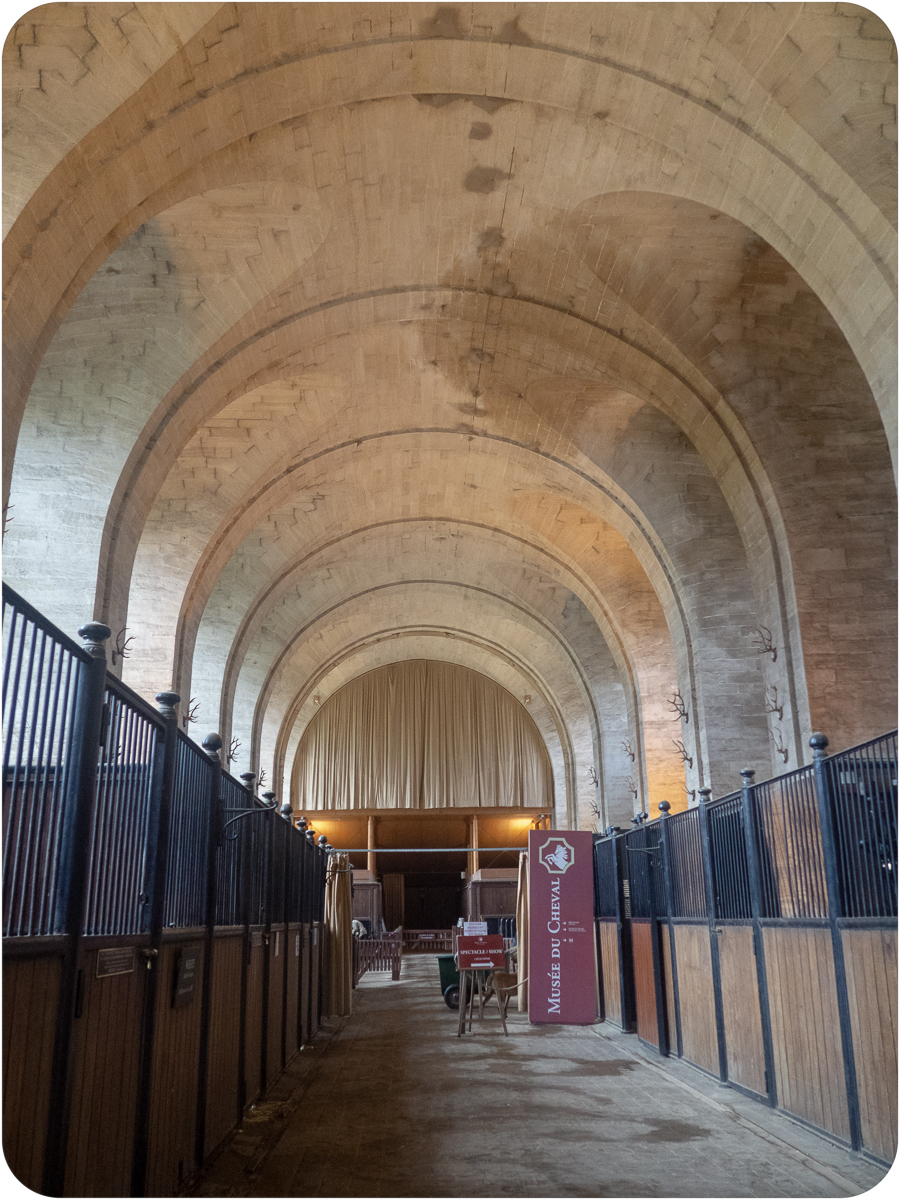 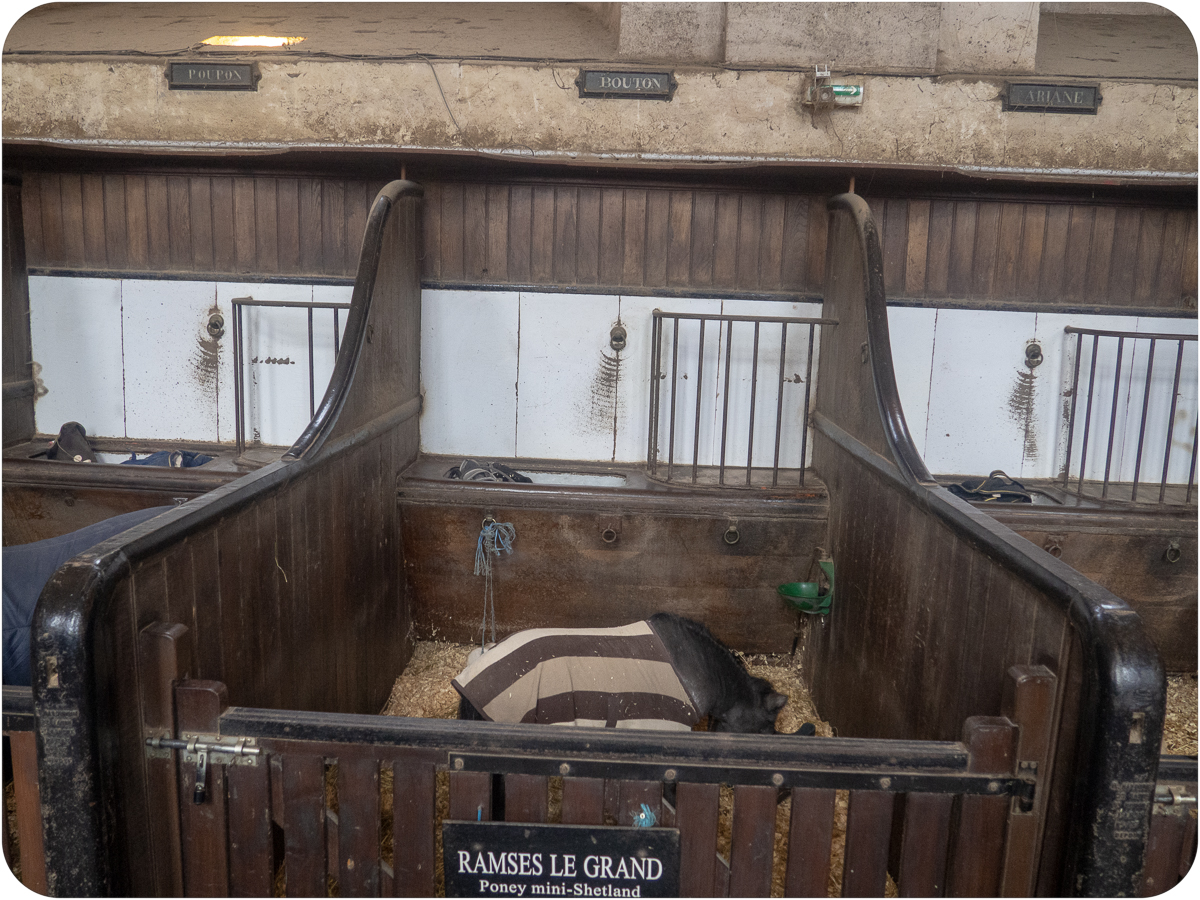 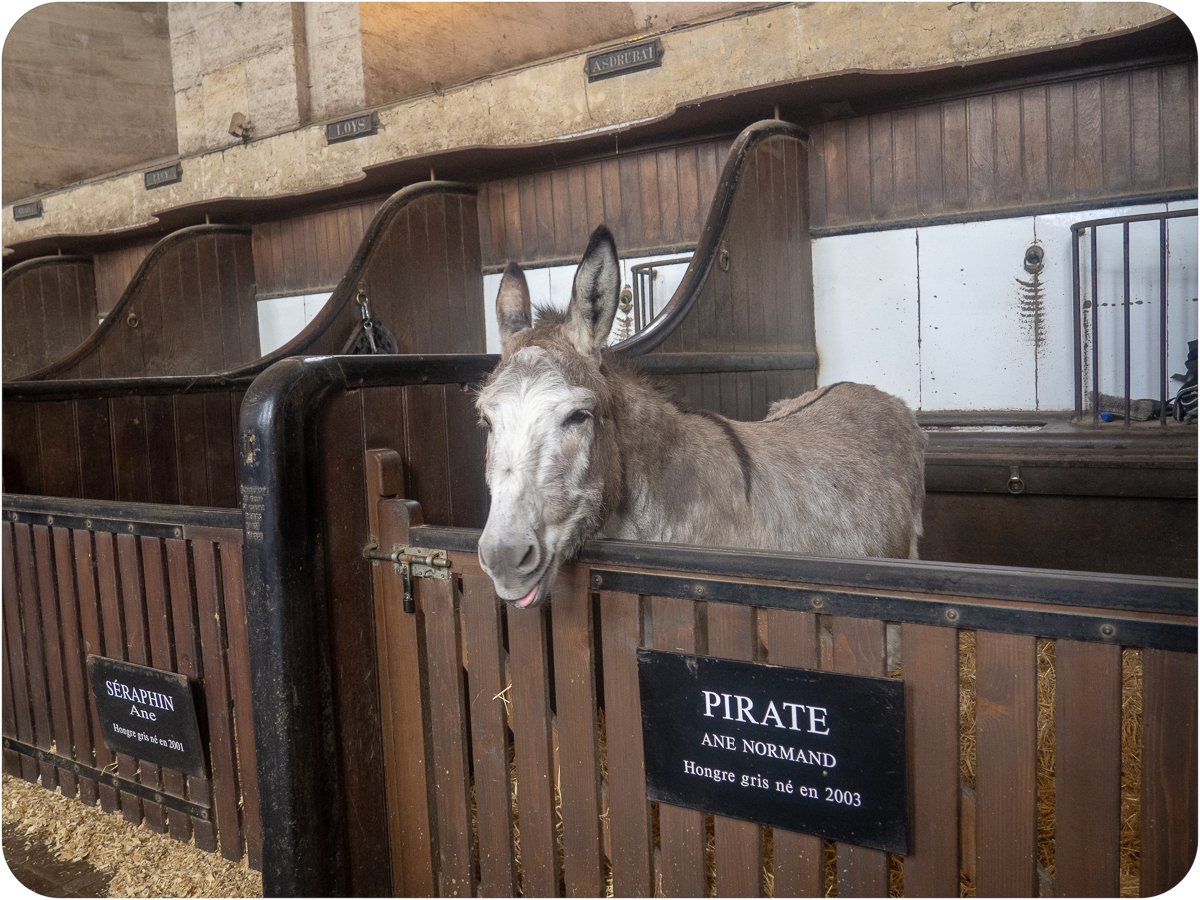 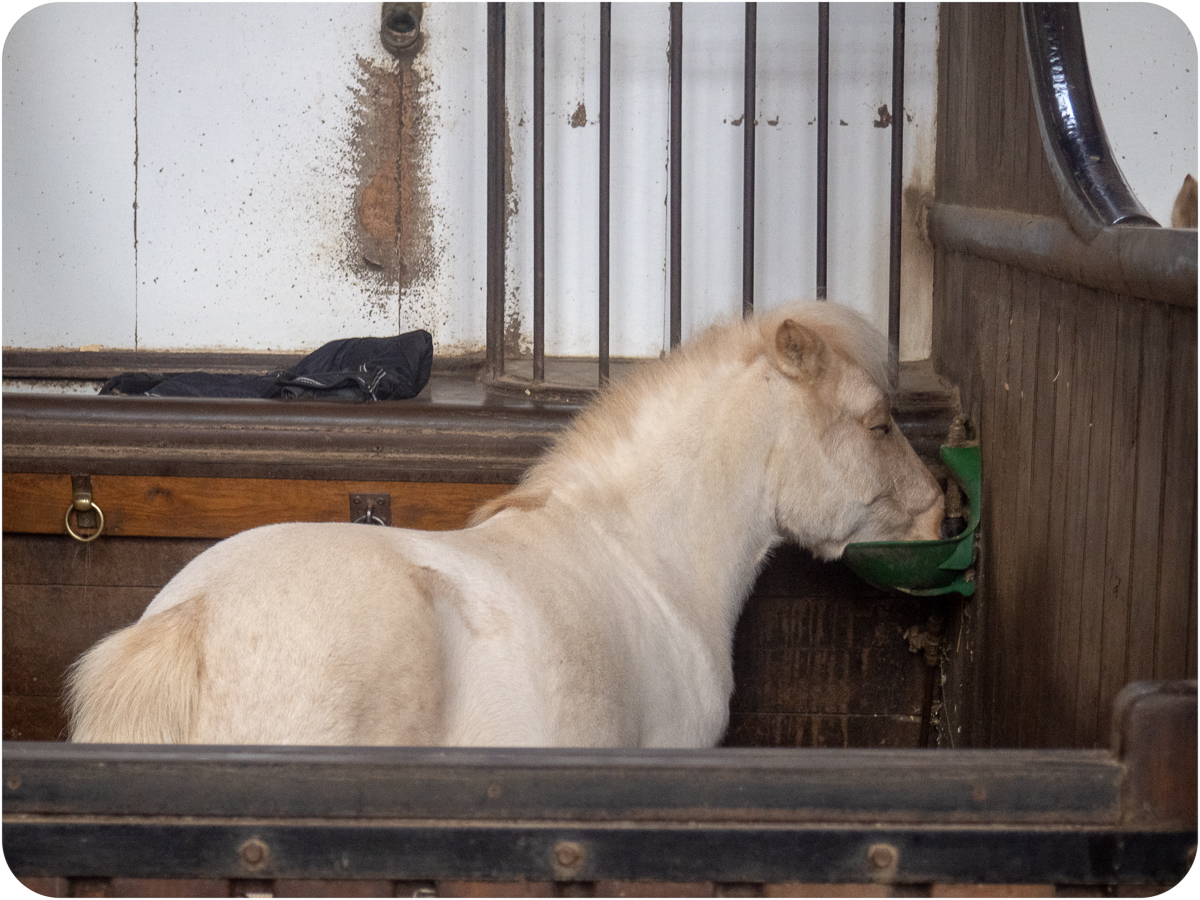 Each animal has a personal water fountain and seems very pleased about it. 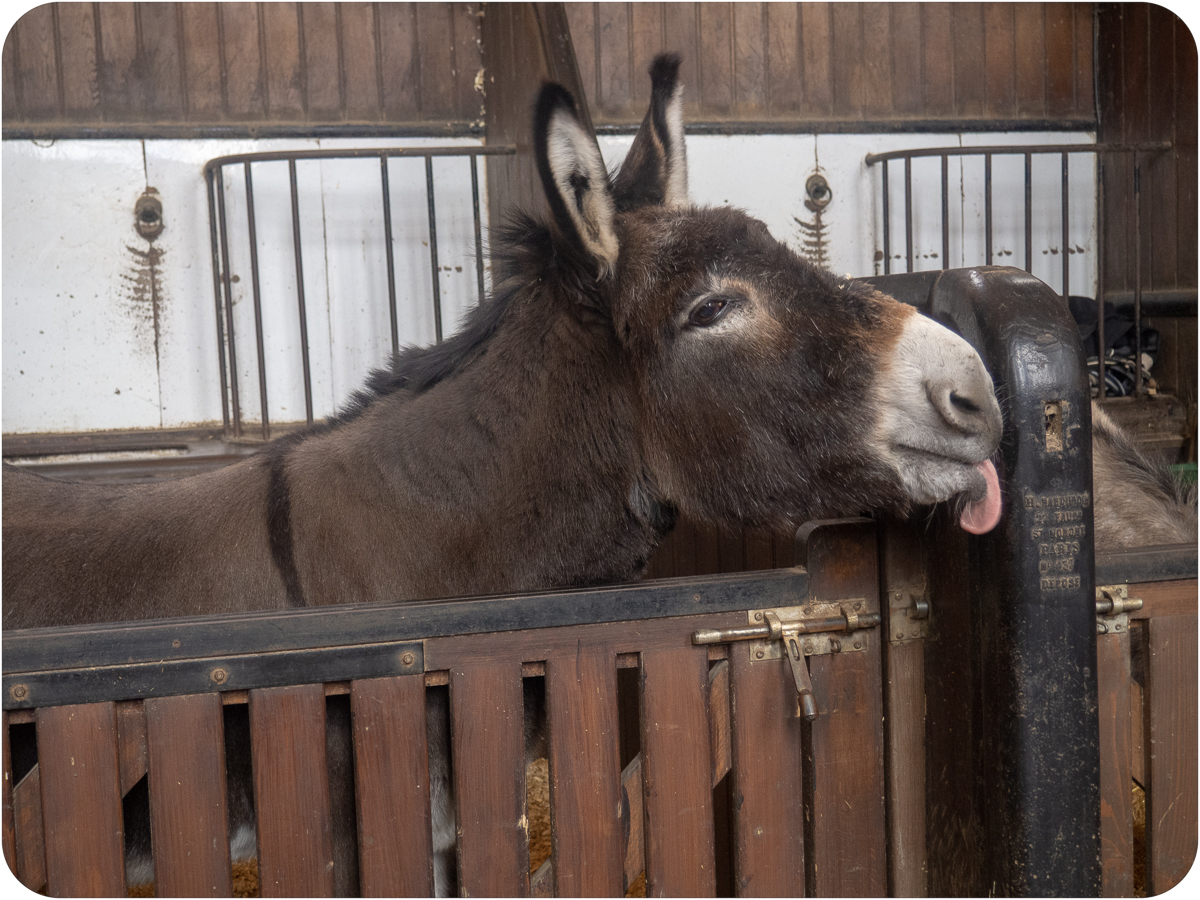 The Museum of the Horse challenged my typical photo taking and posting philosophies. When deciding what to post, I’ll run down a list of loose guidelines: Does it set a scene? Does does it illustrate a story? Does it demonstrate scale? Do I find it beautiful, or meaningful, or historically interesting? Is it funny? Is it cute? Is it a horse?

Being comprised entirely of horses and horse-adjacent items, The Museum of the Horse contains over 1200 photo opportunities on a diverse range of horse subtopics: replicas of old horsemanship manuals, riding equipment from around the world, horses in art including a room of carousel horses, racing memorabilia, and more. The Domaine had been bequeathed to the Institut de France with the stipulation that it be preserved exactly as it is. The Museum of the Horse was established in 1982 after riding master Yves Bienaime, who had learned to ride at the Great Stables, noted that the building was falling into disrepair and wanted to restore its glory. And why not formally recognize humankind’s relationship with the horse? It has ploughed our fields, allowed us to hunt farther and faster and pack the kill home, carried us to war and to work and to pleasure, been an honest friend for centuries. 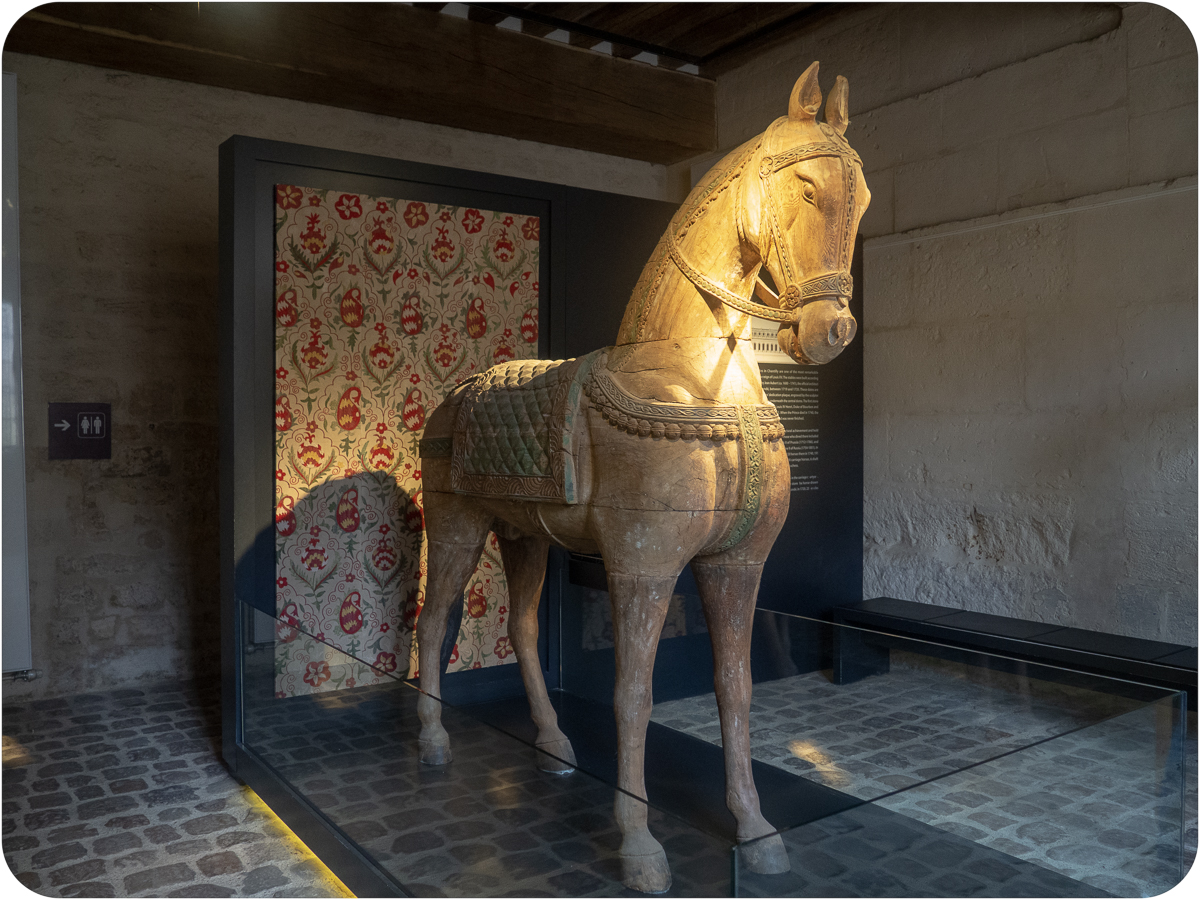 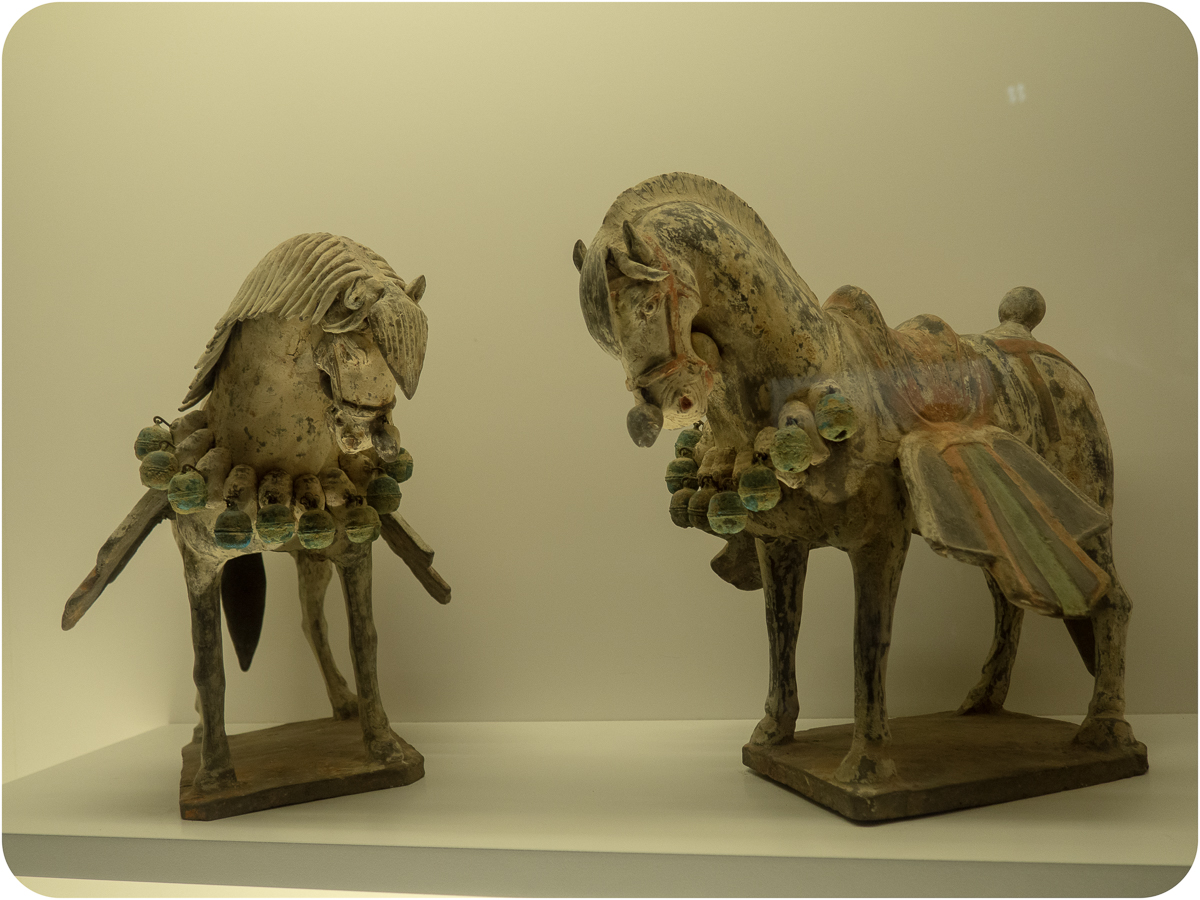 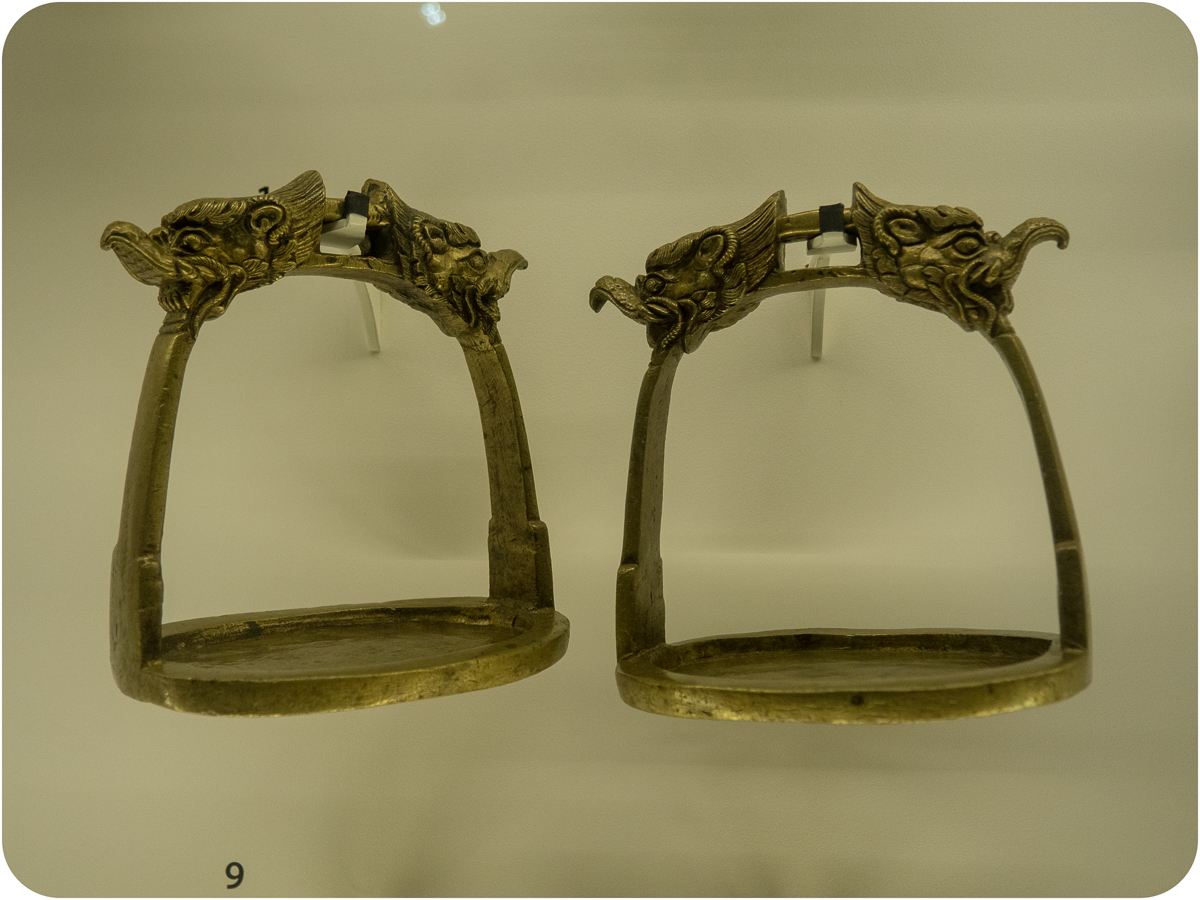 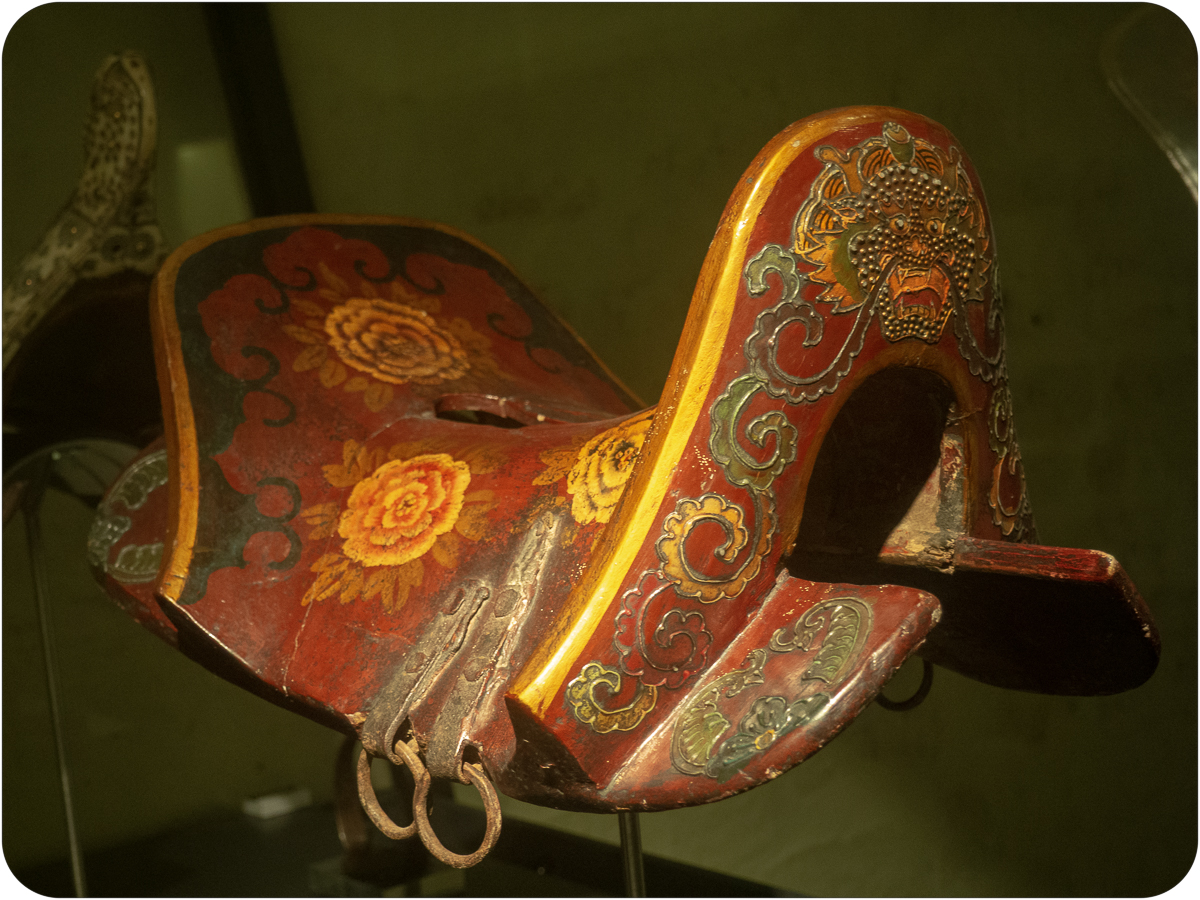 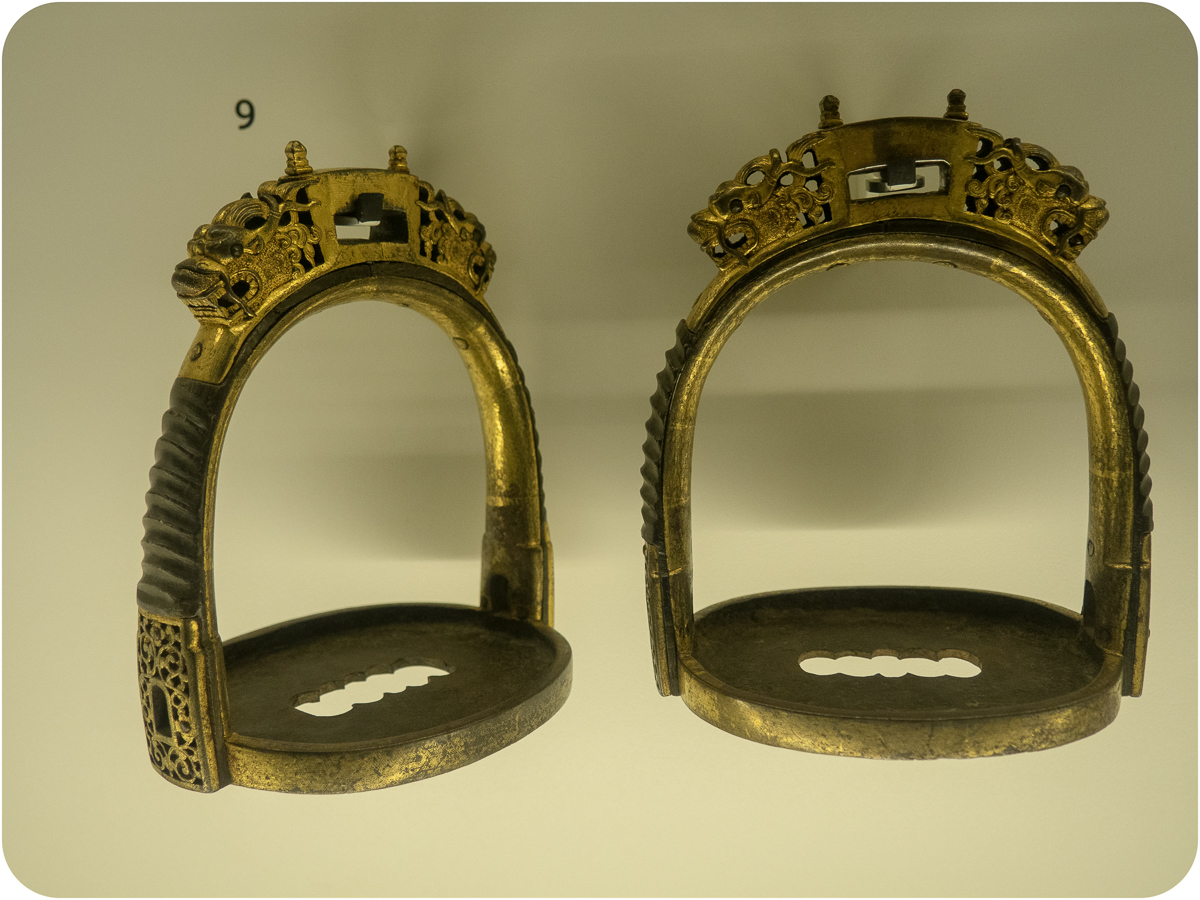 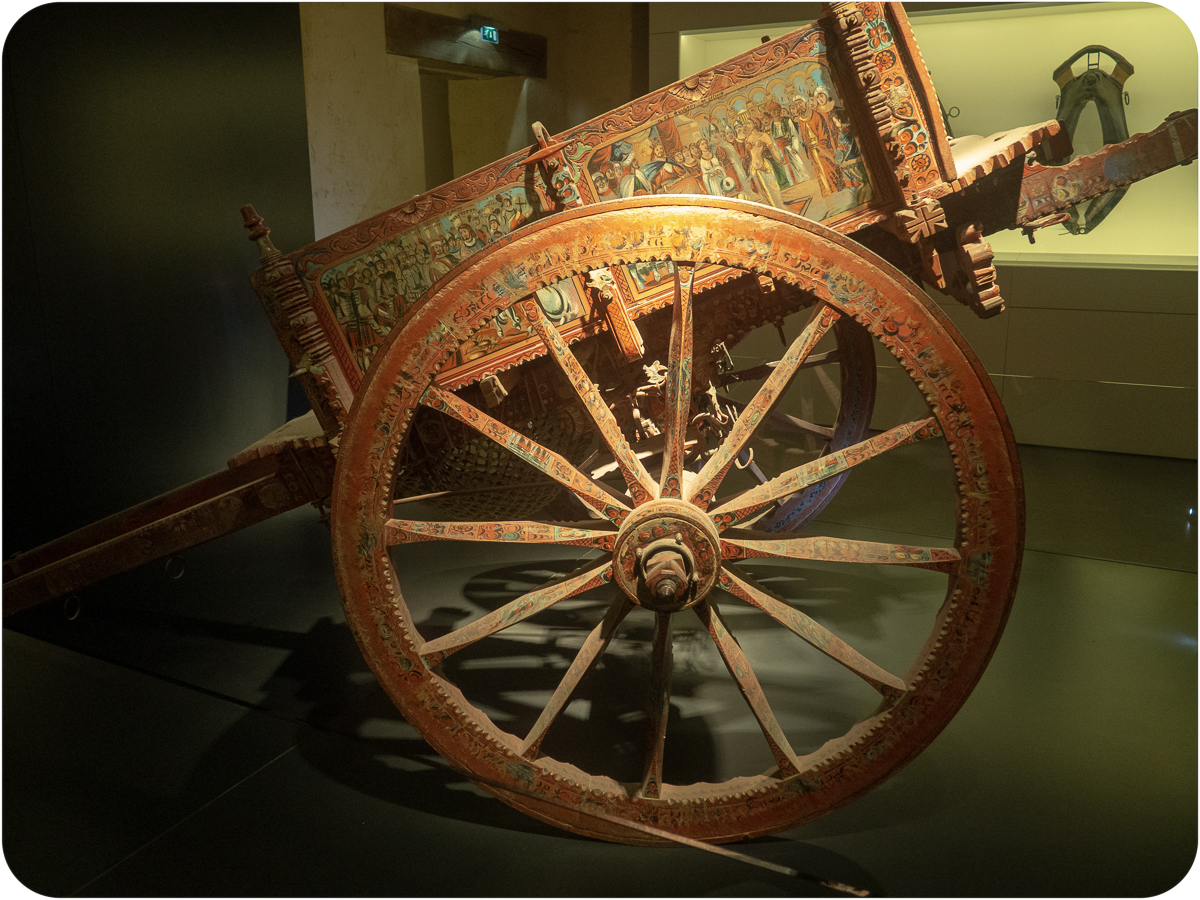 Imagine how mad you would be if this was your cart and you got back to the parking lot from the farmer’s market and saw someone had scratched your paint. 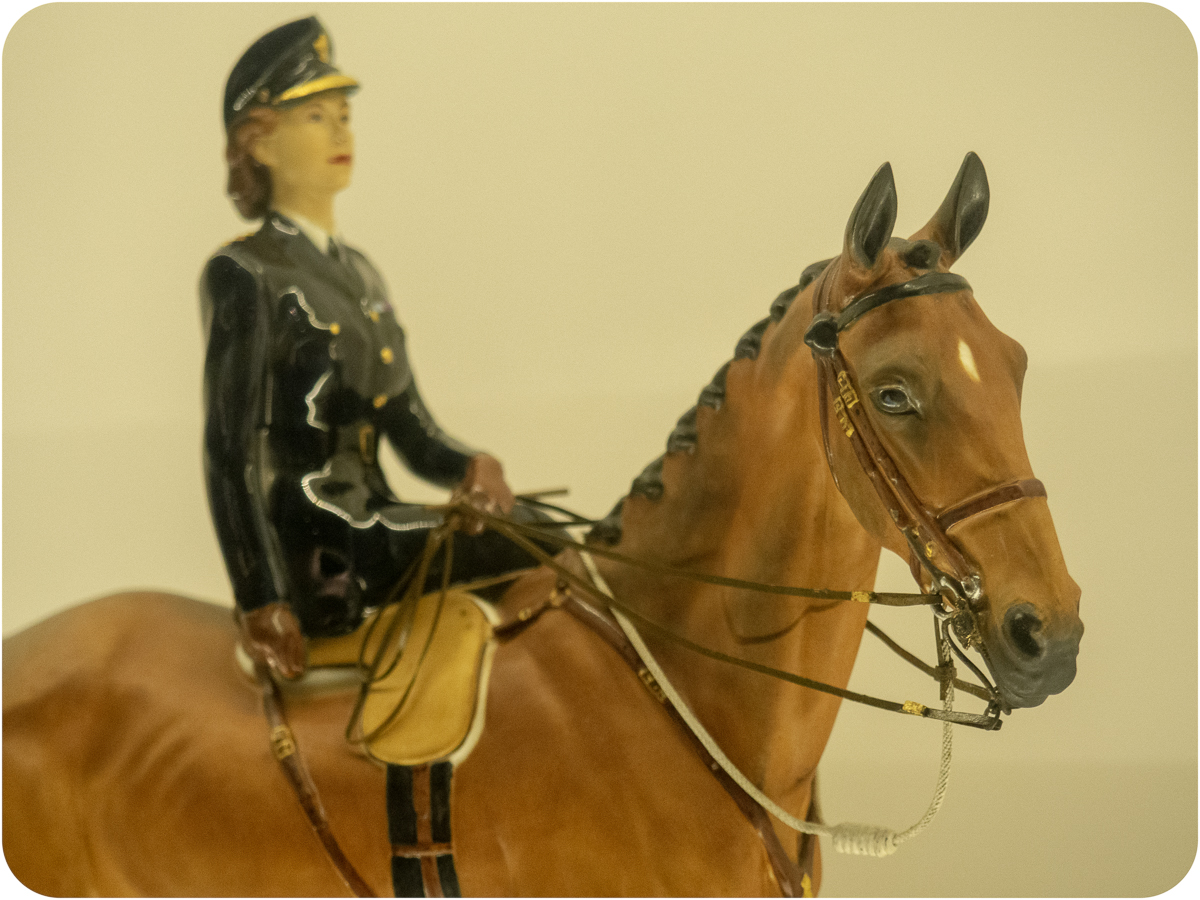 A sculpture of HRH Queen Elizabeth riding her police horse Tommy in 1947. 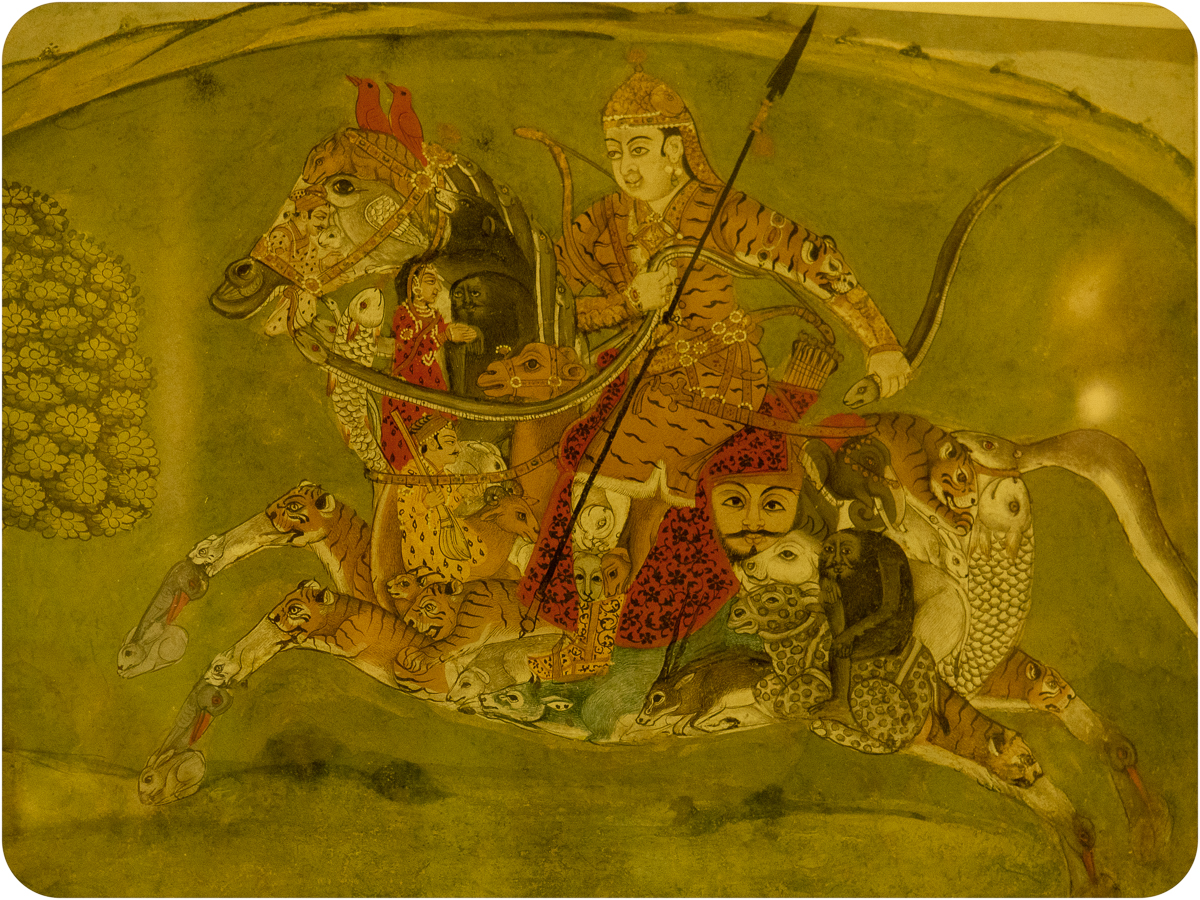 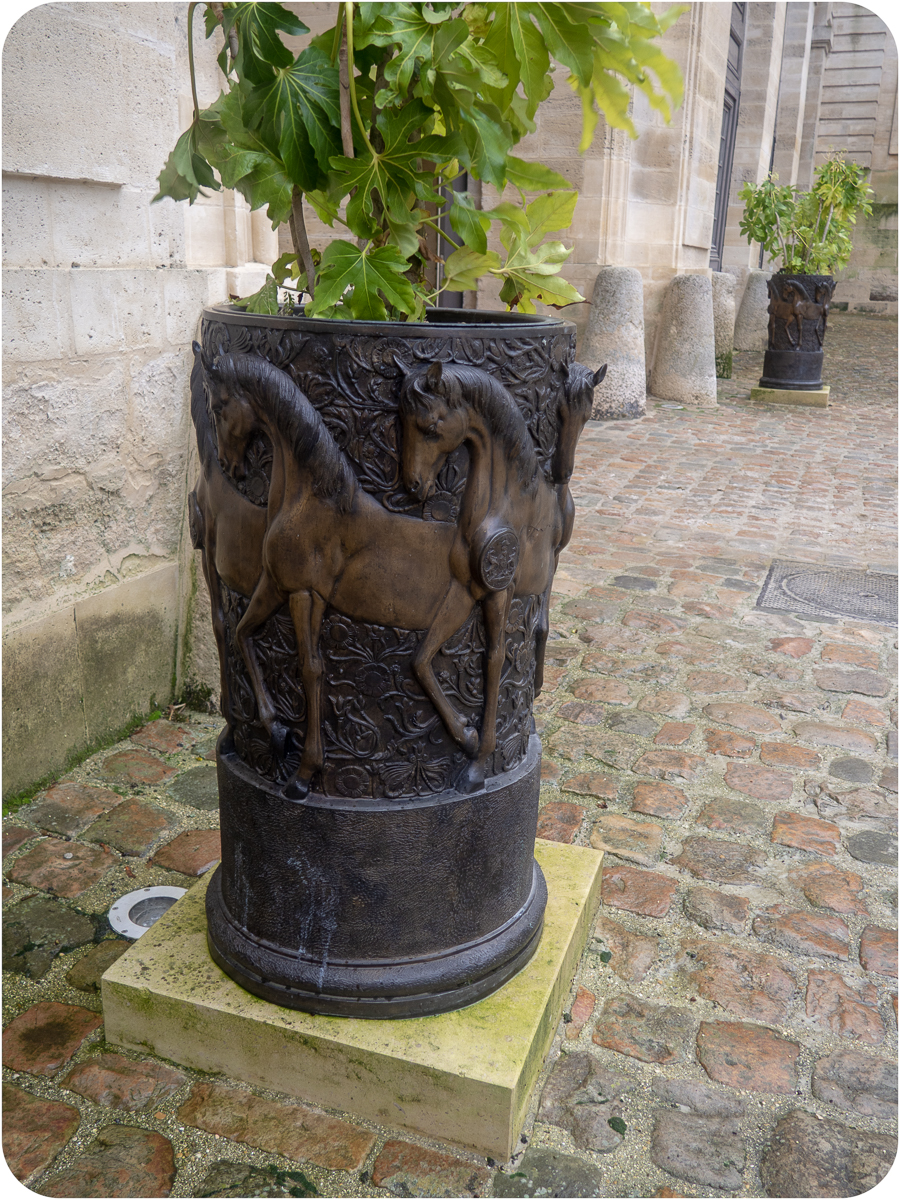 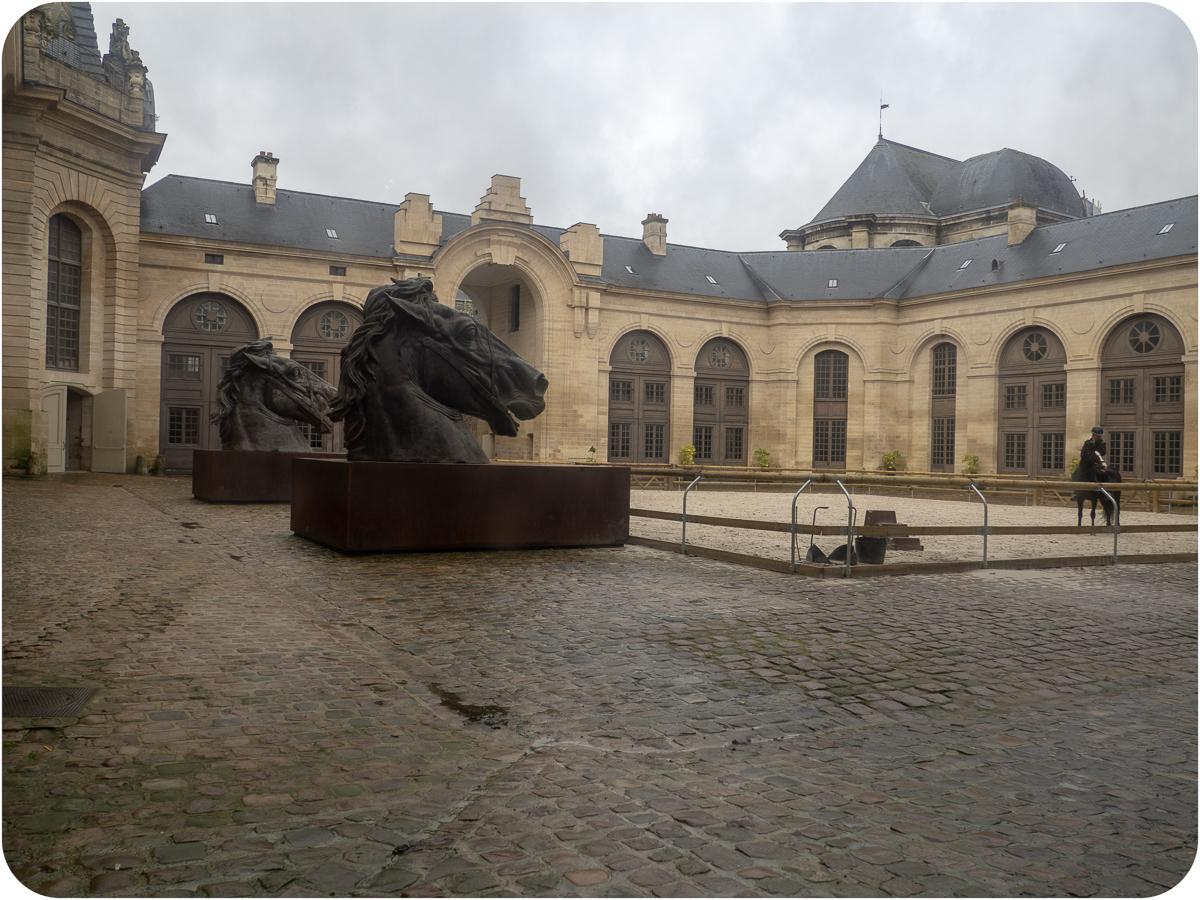 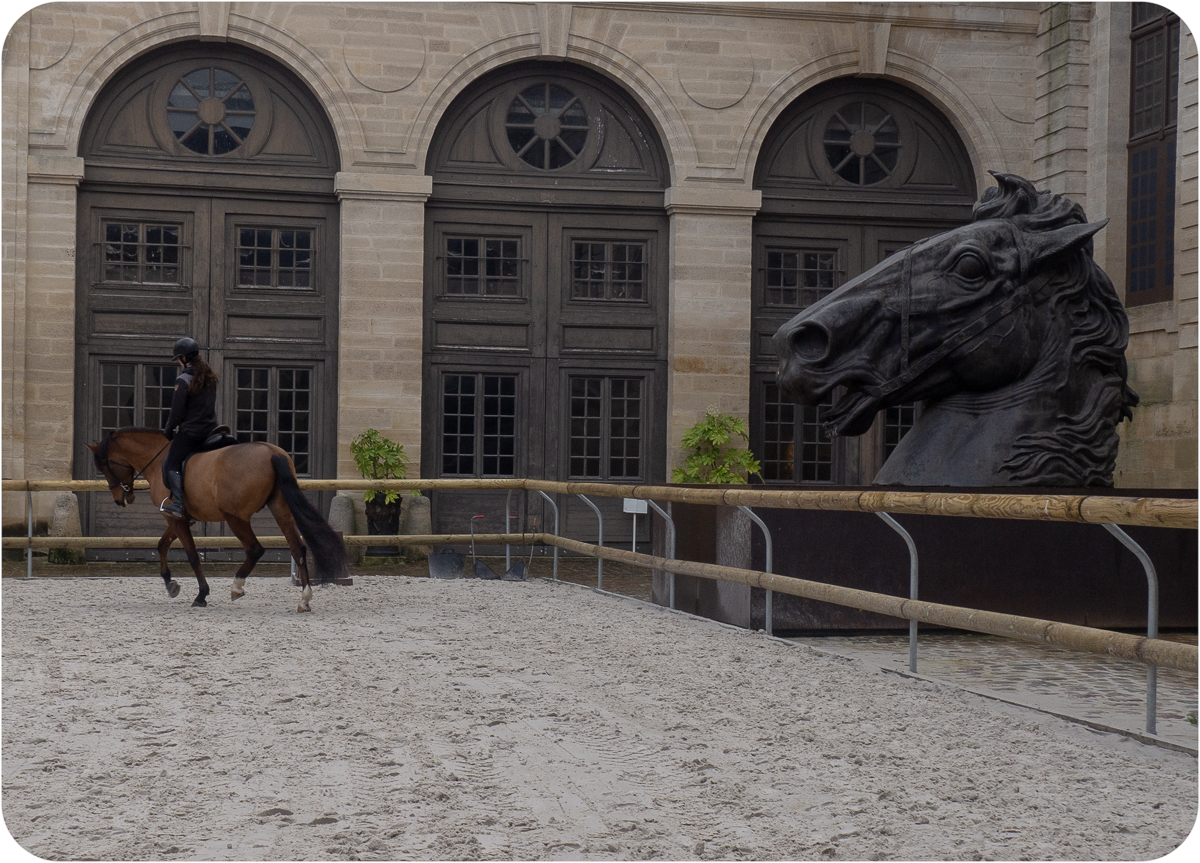 Photographed because scale. And this is a big horse, with a tall rider. Lastly, once you see the eyes in the windows, you can’t unsee them. 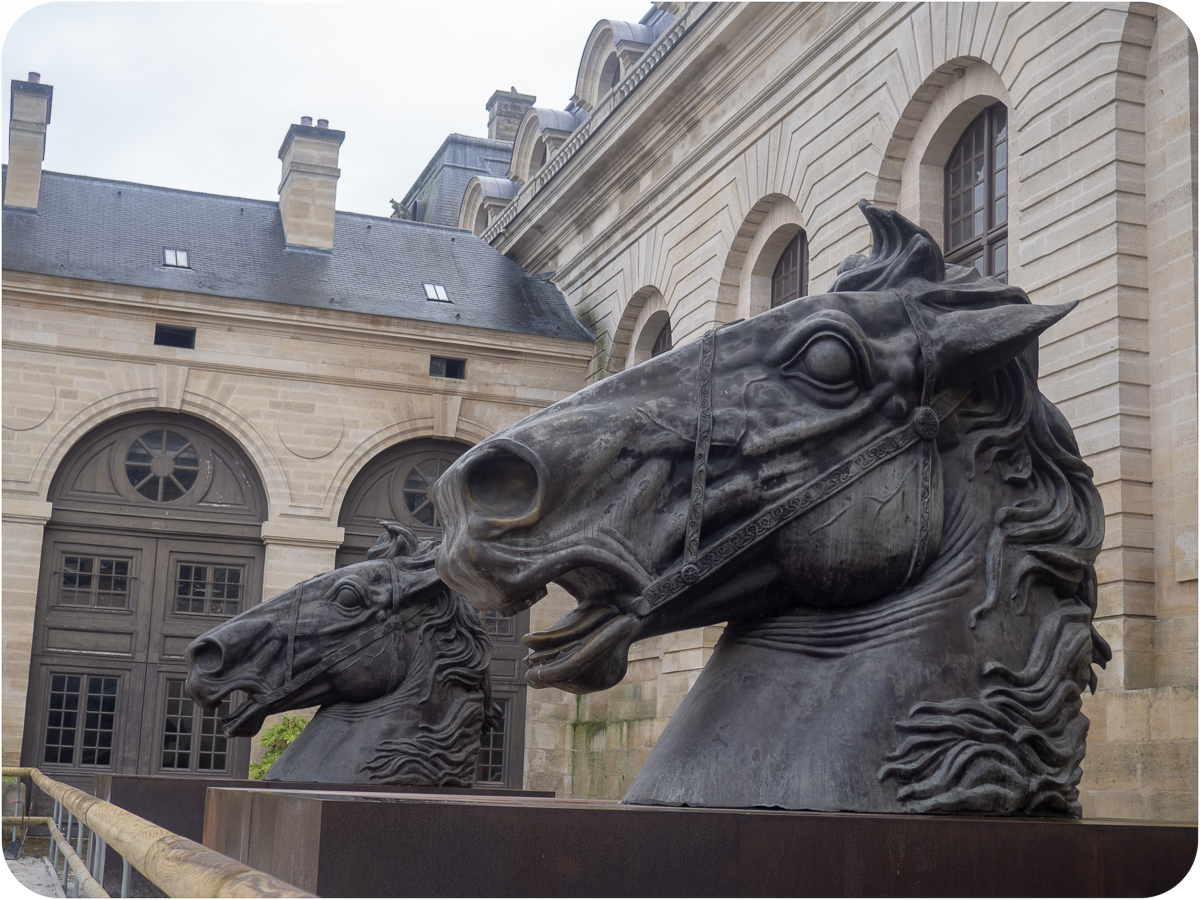 My favorite part of The Horse Museum, however, was their magnificent outdoor arena. Set in a courtyard in the stables, two giant horse statues loom at one end, trumpeting silently at onlookers. Silently, thankfully, because speaking as the owner of the loudest horse in the barn, I think if a horse this size screamed at full volume, the sheer force of it might fling a person catching the brunt of it into space.

And all this was just Louis de Bourbon’s stables, what he imagined to be fit for a royal horse. I couldn’t wait to get into his house.

The Domaine de Chantilly, Jewel in the French Countryside

The City of Versailles: Horses and Hearses