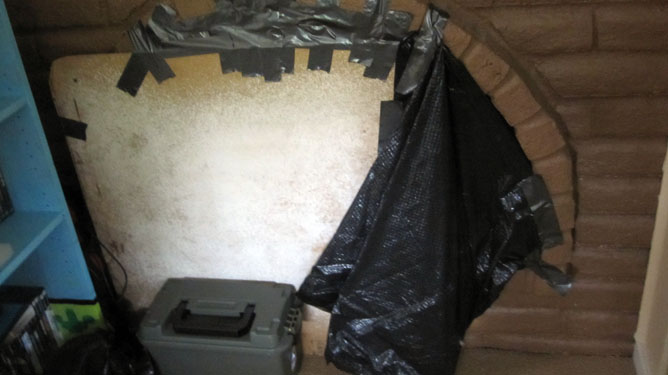 On the day we came home from Vegas, Jason was suddenly overcome by illness. Feverish and still delirious the next morning, I made him stay home from work, and put him back to bed. I then set up shop downstairs to avoid disturbing his sleep, or more selfishly and accurately, to avoid as many of his germs as possible. I’m no saint. I also avoided getting sick myself, so my methods work. While settling in to watch some streaming TV shows on Netflix, I heard some unusual scritching sounds coming from the vicinity of the door to the room. I thought that perhaps my dog had overcome his fear of the stairs, made his way down, and was now tapping and scratching outside the door to be let in. I walked across the room, opened the door, and nothing was there.

The sound came again. Scriiitch. Scriiiiiiiitch. Tap. Tap. Scriiiiiiiiiiiitch. I looked around, puzzled, trying to figure out the origin of this unsettling noise. It was definitely coming from that area of the room, but where? My gaze fell upon the fireplace. Was something in there? Nah. Couldn’t be. If anything, it was a bird on the top of the chimney, and the noises they were making up there were reverberating down and playing tricks on my ears. But still, it sounded awfully close. I stuck my head up into the fireplace to hear more clearl–CAW!!

I screeched, smacked the back of my head against the top lip of the fireplace in my rush to get out, stumbled backward and tripped over my own feet. There was definitely a bird inside our fireplace. My aching head was immediately flooded with “hows” and “whys”. Why? Why would it go in there in the first place? Why would it continue all the way down to the basement fireplace? More importantly, how were we going to get it out? It sounded quite lively, large, and pissed off for good measure. An angrier bird than any of the so-called “angry birds” on the iPhone. Now, maybe I’ve seen “The Birds” one too many times, but I had no intention of enduring Tippi Hedren levels of bird-induced trauma for any period of time, so instead I backed up the stairs and did some research on how to remove the bird without removing an eye. Many web posts suggested opening the flue, luring it further down with a flashlight, and letting it fly out into the room to be captured. I immediately took a strong dislike to that idea. The wildlife center suggested we lure it down, and then throw a sheet over it to transport it outside. I didn’t particularly feel that a crow would respect my threadcount and just chill out in the sheet until I managed to get it outside, so that plan was nixed, too. Many helpful friends on Facebook suggested smoking it out, which seemed less like a way to rescue it and more like a way to kill it, so that was a no-go as well. Then I started watching youtube videos. One woman had managed to capture a bird out of her fireplace with the aid of a garbage bag. This seemed like a more manageable and less bedsheet-destructive plan. So I woke up Jason, and we headed downstairs to try and catch ourselves a crow.

As it turned out, the opening of our fireplace is much larger than the opening on a standard garbage bag, so we boarded off the majority of the fireplace and taped the garbage bag on the rest. We lit a flashlight in the bottom of the fireplace to lure the crow down, left a small hole for Jason to reach in with a fireplace poker and open the flue, and waited. And waited. We had expected that once the flue was opened, the bird would drop down, or fly down, and the garbage bag would explode with motion, and the whole thing would be over in a flurry of activity. But we waited. And waited. Eventually, Jason said he was going back to bed, and left me alone with the crow. The flue was still open, so it could fly down at any moment it chose, if it so chose. This made watching TV more unsettling than usual. The wind would blow through the chimney, grabbing the garbage bag, making it float upward, and making me nearly jump out of my skin. Any time I heard activity coming from the fireplace, I’d put on Jason’s gloves and crouch nervously next to the bag, waiting for a crow to burst through the bag like a Ridley Scott Alien through a chest. Thinking on this analogy did nothing to soothe my expectations of the crow’s behavior. Curiosity would overcome me for a moment, and I’d peek through an edge of the garbage bag with another flashlight, trying to see if the crow had descended. But with a “cluck-cluck-CAW” and a fluttering of wings, I’d be a gibbering mess again. Tremulously, I called up the stairs. “J-J-J-J-J-Jason? Jason? I think something is happening. I need you. AIEEEE!”

…nothing. When I got over my knee shakes, I went upstairs to find him playing Dragon Quest on his DS. “Didn’t you hear me calling you? I could have died down there. That crow could have flown out and blinded me and killed me, and wouldn’t you be sorry to have been level grinding instead of coming to my aid?” “Actually, I’m pretty fine with that*.”

I stalked back downstairs, poked the flue closed, and called the landlord, who called the zoo. The zoo suggested she call back when we have a lion trapped in our fireplace, so she called some chimney sweeps. The chimney sweeps said they could not or would not deal with a live animal but would be happy to clean up a dead one. I might not be fond of the bird in my chimney, particularly if he’s the little bastard who has been eating my strawberries off the plant, but leaving him to starve or dehydrate to death while I play Xbox a few feet away didn’t sound like a winning plan.

This is when we called in an expert: Emily. Emily is the bird-whisperer. Emily has caught birds ranging in size from hummingbird to heron, has a passive-aggressive relationship with a bald eagle, and has a most excellent seagull story which I am not allowed to recount here. Suffice to say: she is no slouch when it comes to bird capture.

Emily came over with a large roll of plastic sheeting, some pizza, some beer from the Black Raven Brewing Company, and got to work. First, we removed anything small, knick-knack-y, or breakable from the room. Next, we opened a window and covered everything remaining with plastic, just in case the crow did decide to blast out and scatter soot all over everything. Third, she removed our handy handiwork from the front of the fireplace, and opened the flue. Fourth, she just reached up there and grabbed it out. Just like that. None of our gibbering or shaking or even any gloves. She couldn’t see it, and I think both she and the crow were surprised when her hands closed around it. 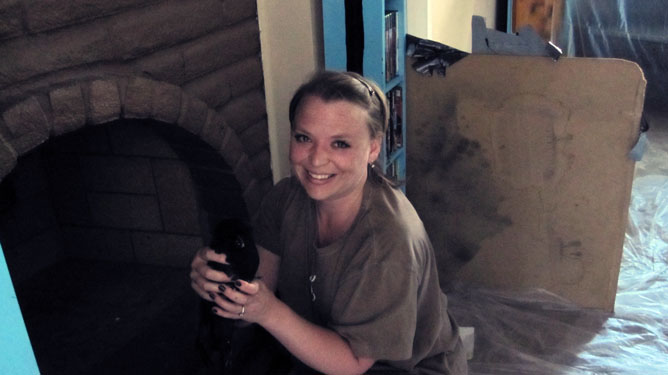 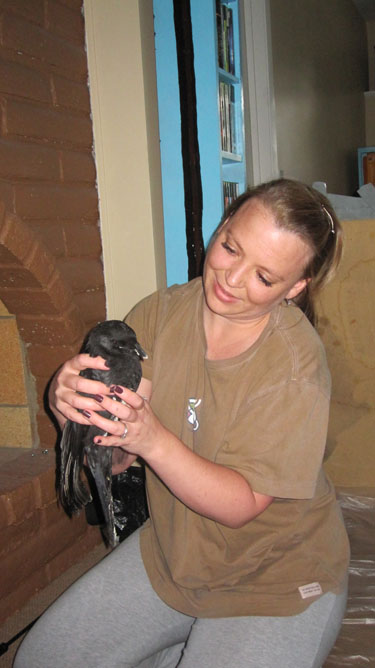 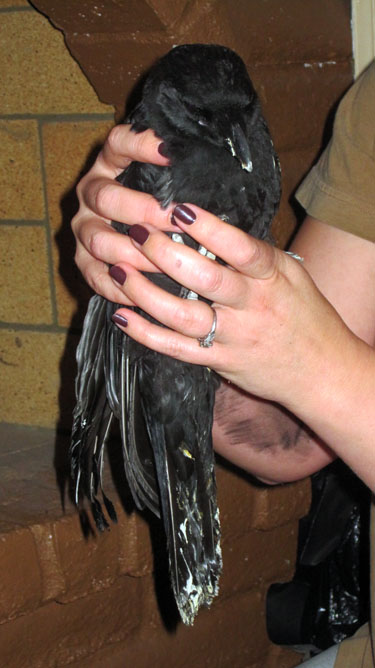 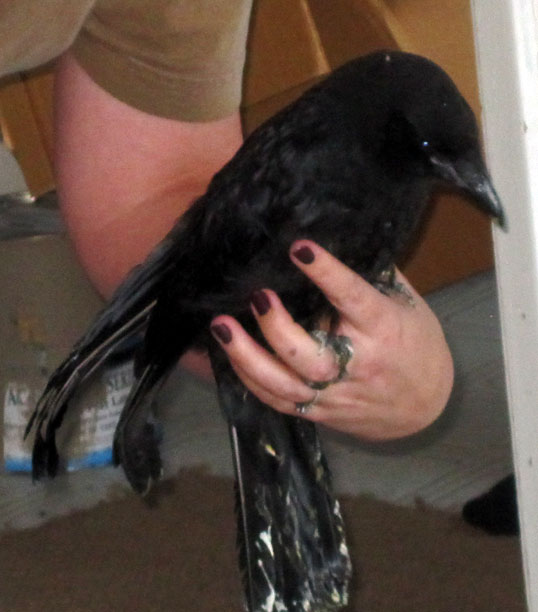 The crow was in a pretty bad way when Emily got him out. There’s no way to tell precisely how long he’d been trapped in the fireplace–we’d been gone for the four days prior, so it could have happened at any point during that time period and there was no one present to notice. He seemed quite dehydrated and weak, and when his head dipped down toward his chest, Emily became concerned about his welfare, and asked us to call the wildlife center to determine the next steps in his care. While we dialed, however, the bird came to and gave Emily a savage peck on the arm, which bruised immediately. Again, this was not her first bird rodeo, and she determined that if he could open his beak to squawk and peck, he could open up for some water. 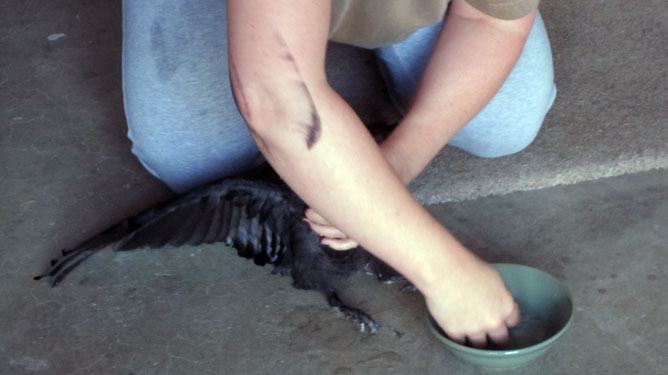 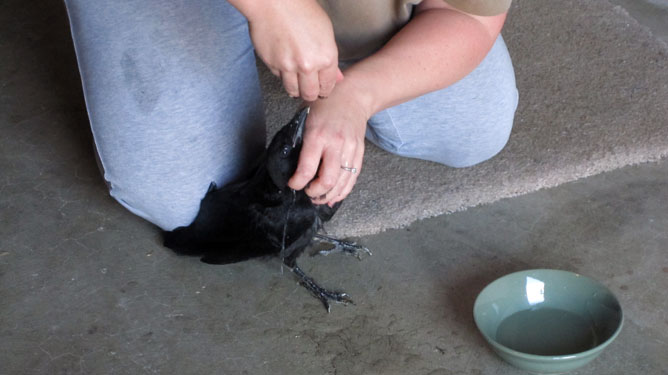 After she dribbled water into his gullet, she set him down to see how he would behave, and he just strolled out of the garage like being trapped and manhandled ain’t no thing and he can’t believe the rest of us got so worked up about it. 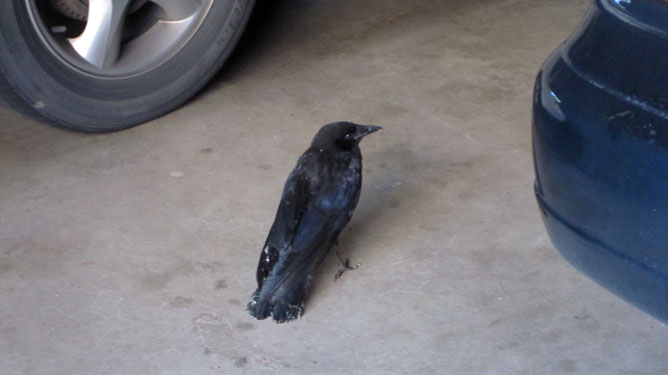 Yeah, no biggie, crow. Just stay the hell out of my strawberries. AND my fireplace.

TL;DR? Here’s the whole post summarized in one minute of video:

*This may have not been the exact quote.