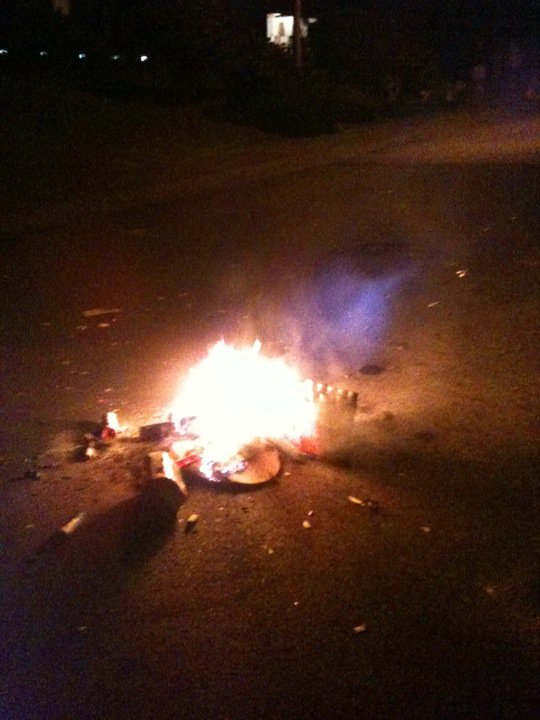 Yesterday was a celebration of all things American–eating and setting things afire to excess. The eating was taken care of during daylight hours, with root beer float cupcakes, and peanut butter banana bacon cupcakes, and strawberry lemonade cupcakes, and double chocolate chip mint cupcakes. Did we, in fact, consume anything that was not a cupcake? I don’t recall, but probably not. In the evening, we moved on to a second party in an unincorporated area where fireworks were still legal, and that’s when things got really crazy.

We started off small, with smoke bombs and sparklers and groundflowers, and as it got darker outside, we went larger. A number of shells were placed in a too-short tube, which meant they exploded at a much lower height than normal, showering us with soot, even when we did our best to cringe back under the small garage overhang. It was still all fine, up until the second-to-last firework, which, after its pyrotechnic displays were complete, just kept burning. And burning. We thought we’d let it burn out while lighting off the finale, but after the finale, it was still burning. Matt grabbed a high quality fire extinguisher from woot.com and attempted to put the fire out. This fire extinguisher was so high quality, that instead of blasting out toward the fire, the chemicals lamely dribbled out over his hands, and so he did his best to dribble the remainder over the fire. We thought he’d achieved success, but five minutes later, it sparked back into flames. Matt went back inside and found the second high quality fire extinguisher and emptied its contents over the fire, which responded by smoking and then bursting back into flames. Matt kicked it over and jumped on it in an attempt to smother the flames, and though that seemed to work, there was just enough wind to spark the cardboard back up into a fire yet again. As the fire began growing in size, a helpful neighbor wandered over and gravely informed us, “That’s not a firework, you guys, it’s just a fire.” Really? I had no idea! But it would make an excellent title for my memoirs. “No fireworks, just a fire.” It has a nice ring to it, doesn’t it?

Since two entire fire extinguishers and a stomping weren’t enough to kill this fire, we eventually reeled out the hose to douse the flames. I grabbed the end, placed my thumb over it in an attempt to increase the spray in one direction, and promptly splashed water all over everything except the fire, namely, all the other party guests. Another guest attempted to take the hose away from me in a more competent display of firefighting, but I would have none of it and protested “NOOOooo! I’m a FIREFIGHTER!” Even with a flood of water applied directly to the fire, it took quite some time to put out, and each time we stopped, it would begin smouldering again. 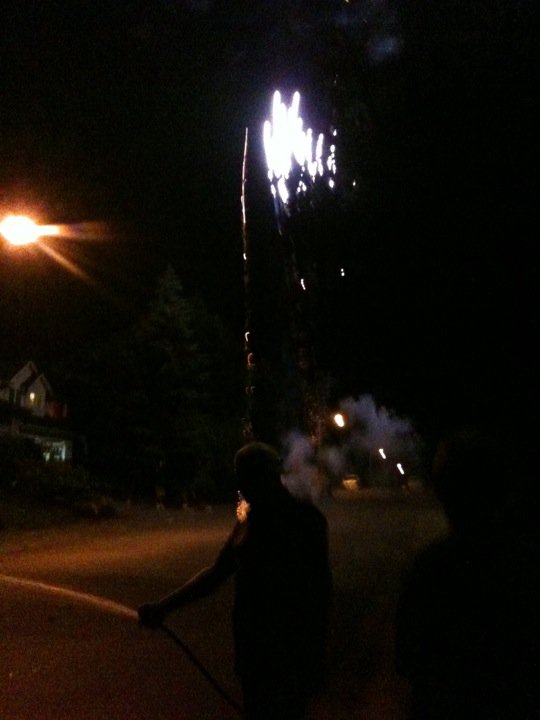 John ended up running water over the remains for thirty minutes or more to ensure that if the neighborhood burned down, it wouldn’t have been due to any neglect on our part.

Once the fire was finally completely out, we made our way back inside to chat and consume more sugar, and furthermore availed ourselves of the fake mustaches sitting on the table. However, when it came time to take them off, Matt discovered that it may not have been the best idea to wear one over his real mustache.

The rest of us laughed until we cried.