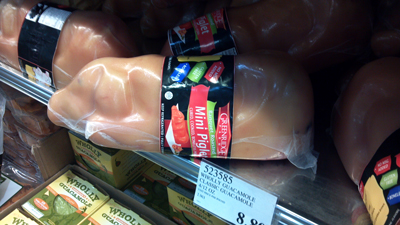 “There was a time not so long ago when pigs were afforded no respect, except by other pigs; they lived their whole lives in a cruel and sunless world. In those days pigs believed that the sooner they grew large and fat, the sooner they’d be taken into Pig Paradise, a place so wonderful that no pig had ever thought to come back.” Until now, molded into the shape of piglets for your oven-roasting pleasure and Thanksgiving delight.

Pros: This is probably the only time you’d be able to say “Oh man, I’m so hungry I could eat a whole pig” and actually be able to do it, you don’t win friends with salad, as far as hog faces go the molded piglet face is cuter than the porchetta face.

Cons: Would you even be able to take a bite without hearing “Baa Ram Ewe”?, once you’ve started on the molded food craze your table will be covered in turkey shaped butter and jello molded into hooves, also kind of looks like a naked puppy which adds a whole new dimension to your holiday table.