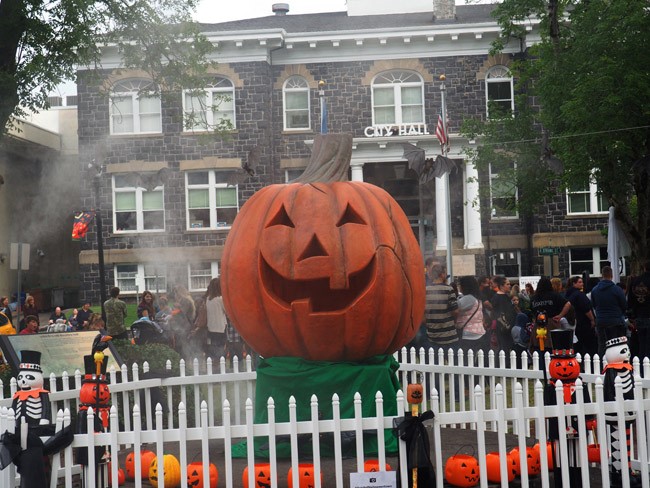 At least six people messaged me this year to tell me about St Helens, Oregon, the city in which Disney’s Halloweentown and its various sequels were filmed. Much like Forks embraced Twilight, St Helens has embraced Halloweentown, and each October, the entire city gets Halloween fever, with haunted cruises, tours, car shows, contests, and bonfires with live music and ghost stories. The area in front of city hall is even decorated the same way it was for the movie. Situated just north of Portland, St Helens is within ideal daytrip distance from my home, so I decided that it was imperative that I visit.

Also like Forks, the media that put the town on the map is…objectively not great. Wellll, let’s say, subjectively not great. After all, I was a bit too old for the target market even when it was first released (and that’s if my family had cable at the time which I don’t think we did so I couldn’t have watched it even if I had wanted to), so I didn’t connect with the series the way some people even a few years younger than me might have, and I also don’t have the nostalgia of watching it with my kids or any of the other things that give you that warm Disney glow. Instead, I was a thirty three year old watching a movie that’s basically a Halloween episode of The Magic School Bus with a villain known as “the bad thing” which may put me on some kind of watchlist as a potential child endangerer somewhere. And then the next day, I watched Halloweentown II: Kalabar’s Revenge, which could have also been titled Halloweentown II: Rehashing the First One. I guess there are a few more sequels, but I couldn’t bring myself to watch them, not in the name of research, not even under the influence, no thank you, Sam I Am, you can keep your cheesy jokes and children’s squabbles. But I still decided to visit St Helens, because I’m always down for spooky shenanigans, even when it’s based on not-that-great media. Maybe especially if it’s based on not-that-great media. 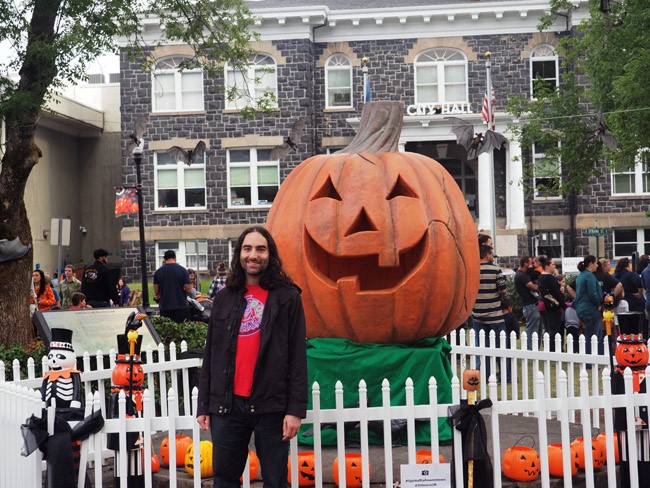 All of the events in St Helens for the month of October are listed on their website, and I chose to attend the weekend of the pumpkin carving contest and haunted hot rod classic car cruise-in. If I had gone the week prior, I could have met one of the actresses from the Halloweentown movie (OH BOY!!), but I’m really glad I didn’t–I have a friend who lives in St Helens and attended that weekend and she said the crowds were absolutely insane: “Fifteen thousand people crammed around that damn pumpkin. Never forget.”  When I visited, it was thankfully much quieter and in the sweet spot for these sorts of events: enough people so you feel like you’re part of a festive event and not some sad unintentional ghost town, but not so bustling that you can’t move around freely. There was still a line to pose with the various photo opportunities, but none of them were very long. If I had to elbow and jab my way in and wait in line for an hour or more to take a photo with a plastic pumpkin, I would have been very displeased. 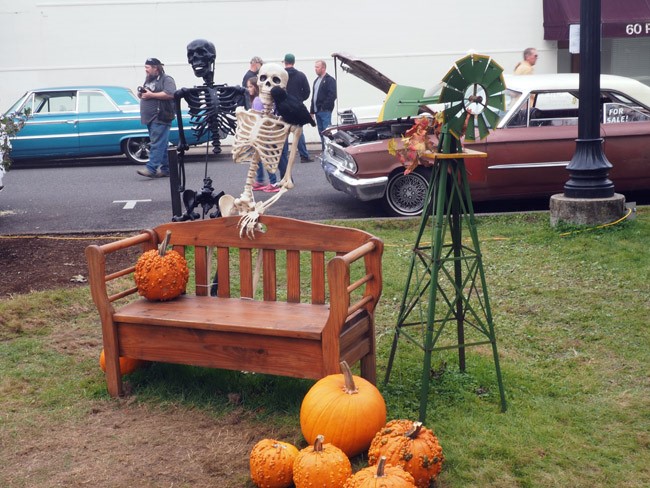 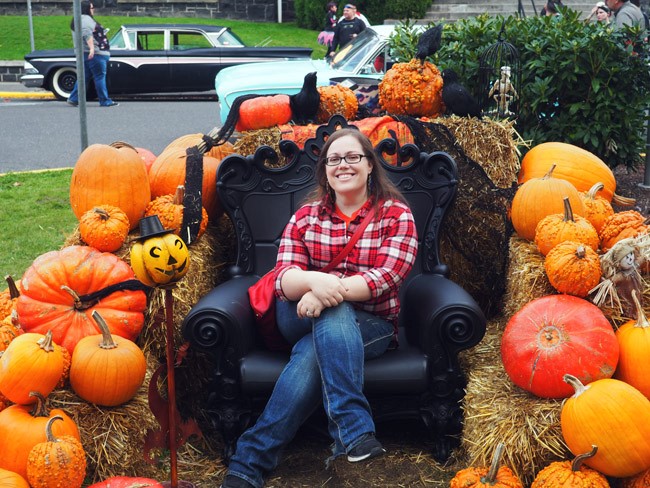 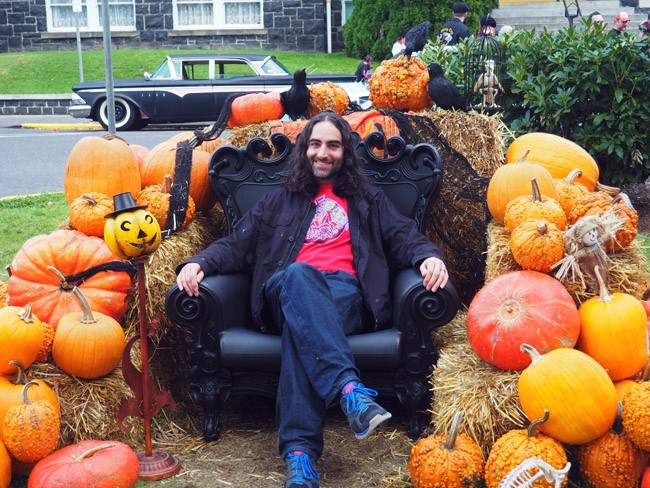 Speaking of photo opportunities, St Helens knows where its bread is buttered, with various decorated benches and thrones, all inviting you to share your photos on social media (hashtag SpiritofHalloweentown hashtag StHelensOR hashtag KalabarNeverForget hashtag ThankYouDisney hashtag WeAcceptAllMajorCreditCards hashtag CashWorksToo hashtag NeverGonnaGiveYouUpHalloweentown hashtag HowLongCanIDragThisOut). Who was I to disobey? 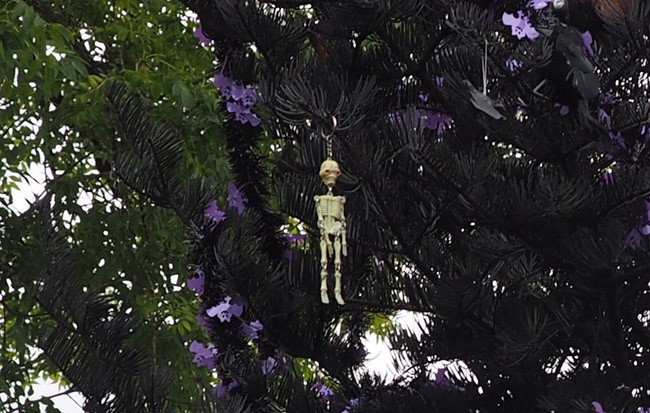 While waiting in line for the plastic pumpkin photo op, I couldn’t help but notice a very familiar looking ornament on their Halloween tree–a plastic skeleton keychain with red rhinestone eyes. Why familiar? Way back in the days when people joined order by mail clubs, (we’re talking the halcyon days of 1996 here, people) I joined the Stephen King book club and the exact same skeleton keychain was my free gift for joining. As a stupid 14 year old, I thought I was getting a really swell bargain, buying books at cover price plus shipping…and a really rippin’ free keychain. I don’t know how they got my name, I don’t know how they knew I was really into Stephen King and at the most gullible stage of my life, and I sure as shit don’t know how I paid for it, but I remember hanging that plastic skeleton off of my backpack and feeling like the biggest badass who ever strutted down a hallway at school. Actually, now that I look it up, that book club is still a thing, and they still offer a free gift with membership and I hope to god it’s still the same keychain because mine fell apart a decade ago and I could definitely use a new one. 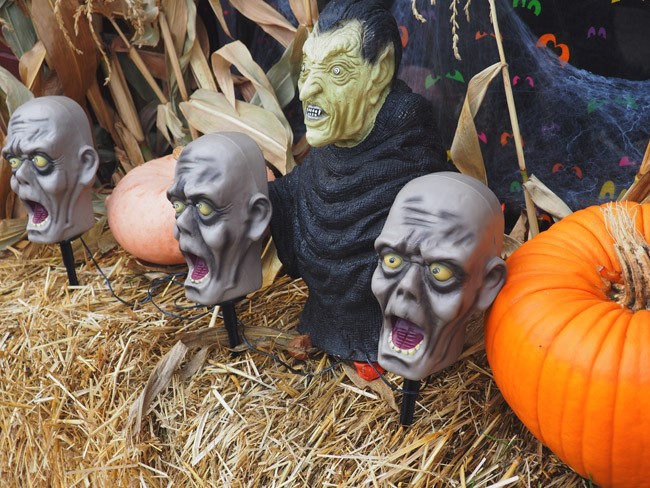 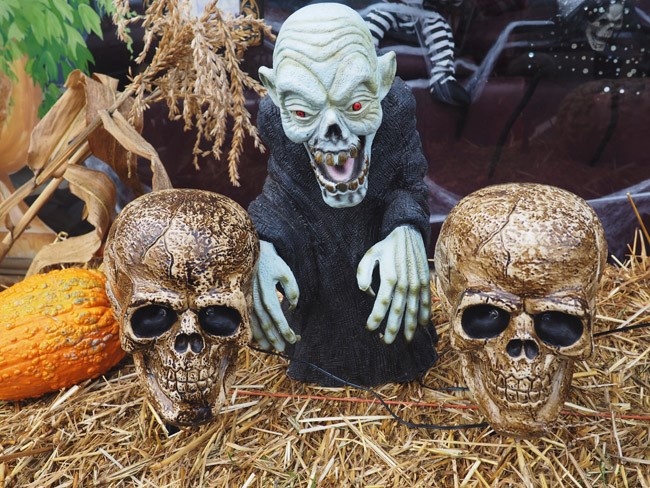 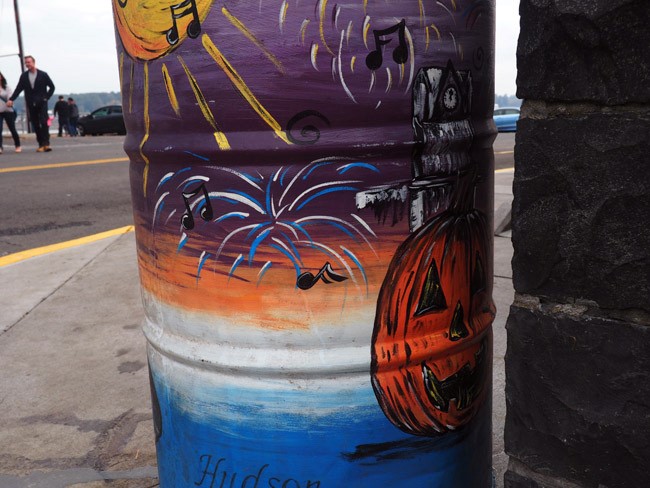 Even their garbage cans are Halloweentown themed! 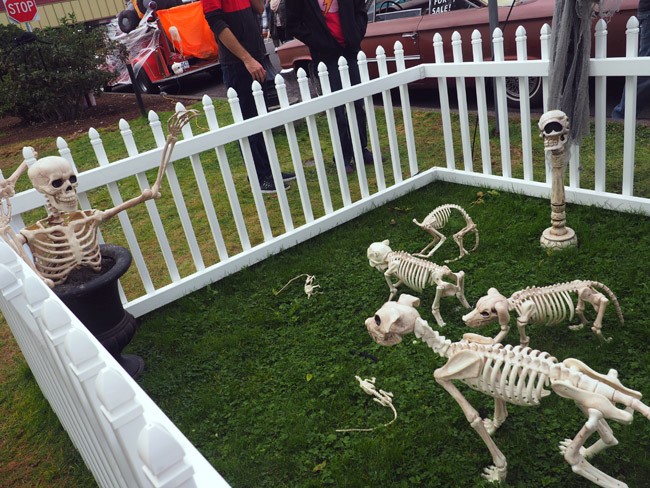 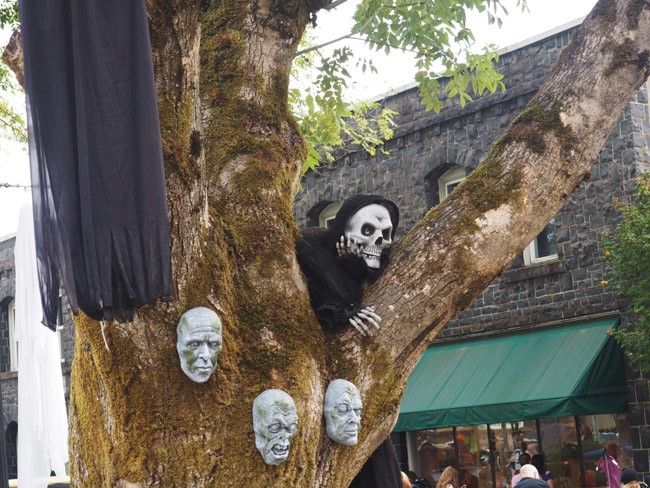 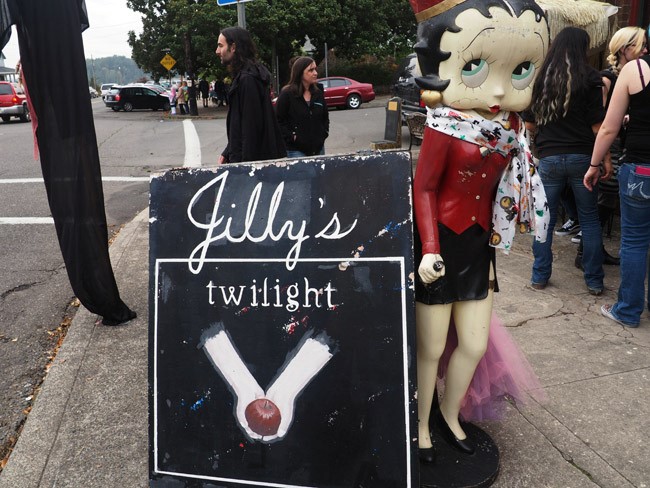 Also, if Forks doesn’t want Twilight anymore, St Helens will take that, too. 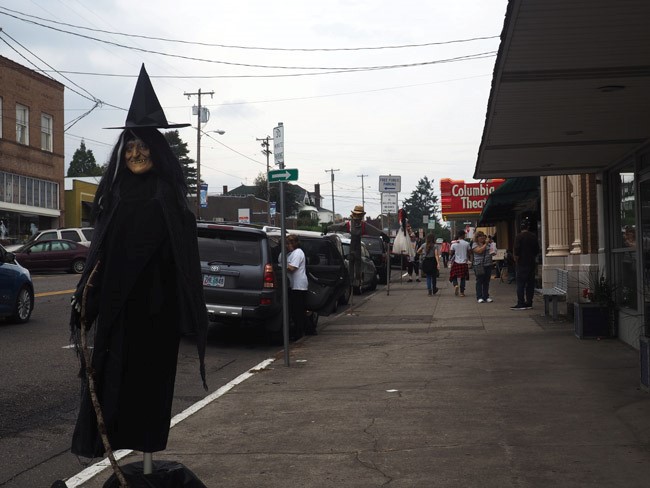 After voting on my favorite carved pumpkin (no photos as they were all behind reflective glass and were also old enough that they were getting spooky in ways their creators did not intend), I scoped out the haunted hot rods. I have to assume that the people who own classic cars devote a good 75% of their free time driving around to various events and showing them off with the community of other hot rod owners, and the other 25% is polishing the car and acquiring new decorations. Much as I want my very own macabre mobile, I’m not ready to commit to that lifestyle just yet. It is fun checking out the way everyone has a unique take on tricking out their vehicles, though. 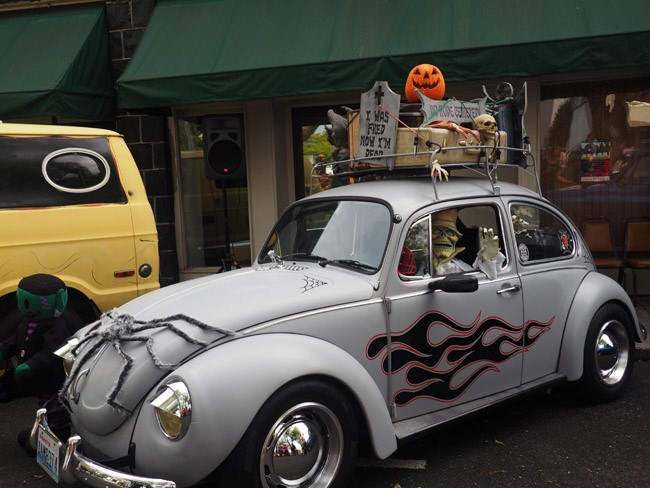 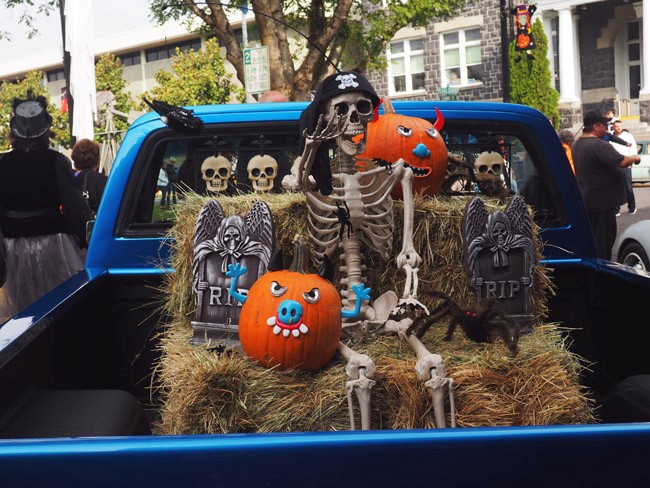 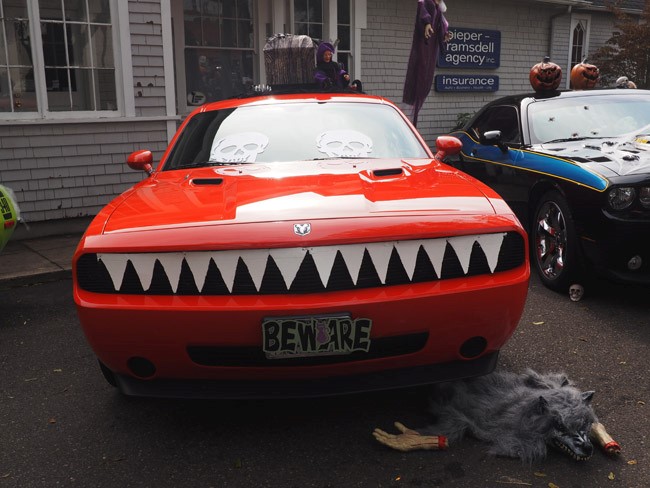 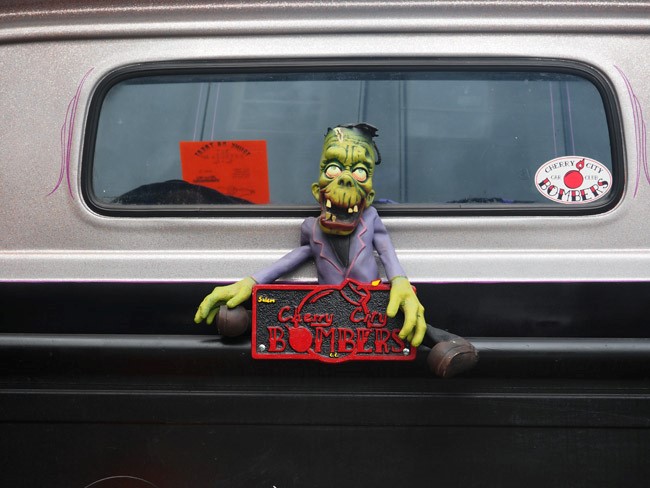 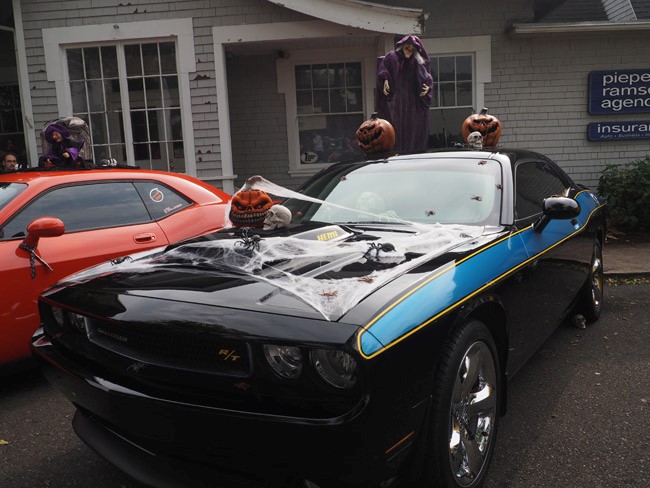 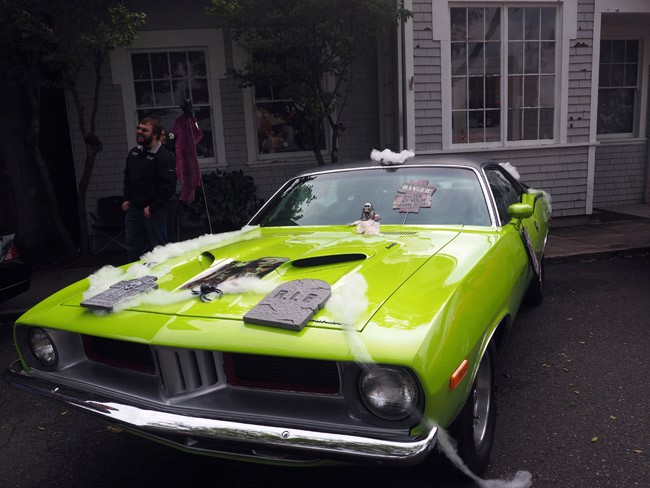 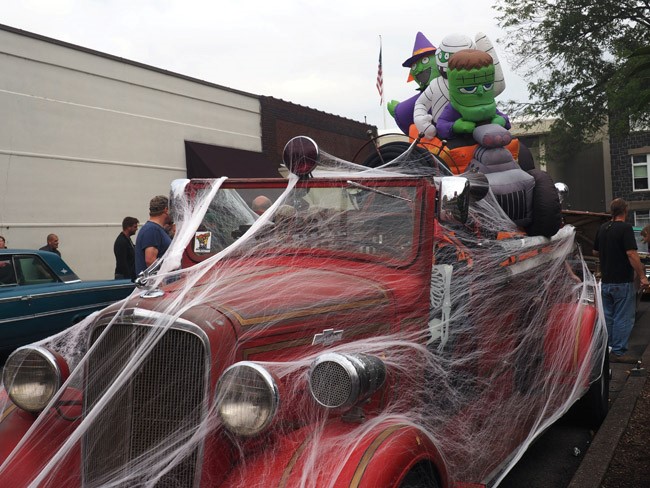 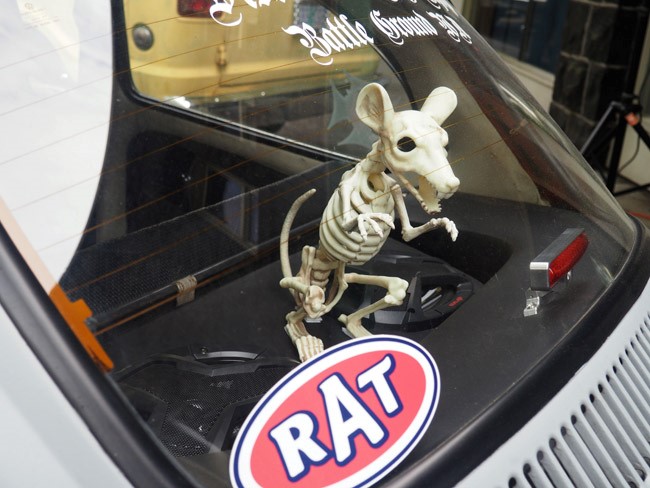 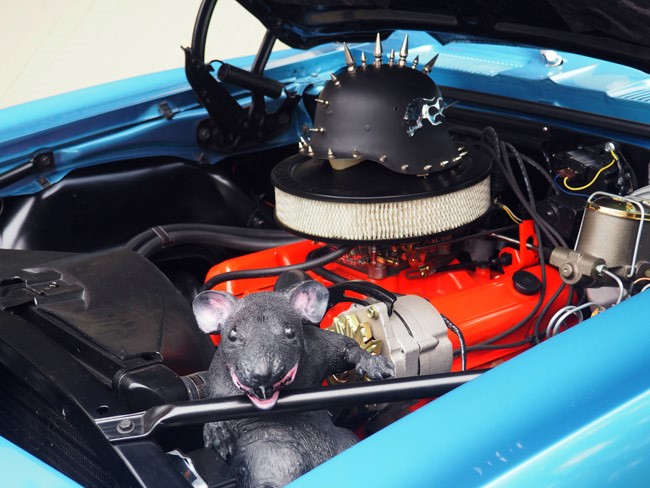 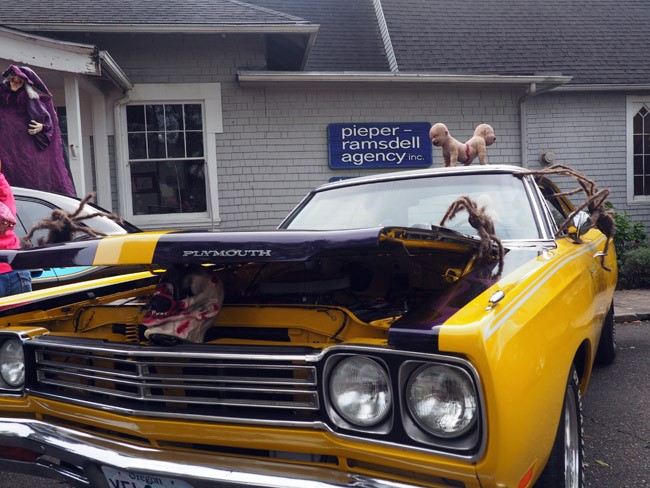 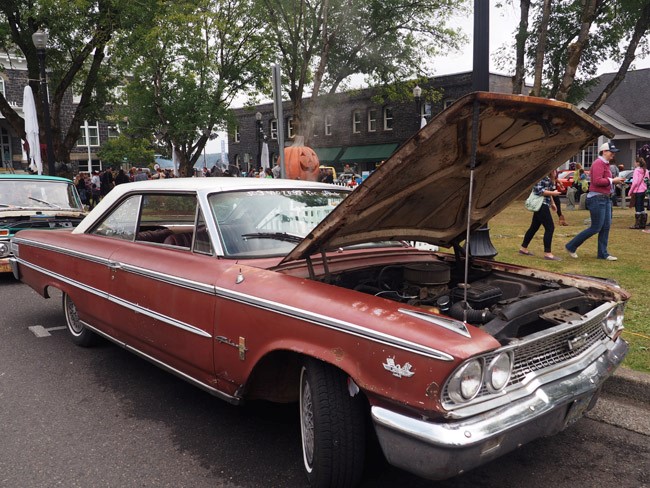 I have to assume this last car is actually haunted as it was not decorated in any fashion but still parked prominently in the “haunted hot rods only” section. Ghosts in the machine? Poltergeists in the spark plugs? Revenants in the radiator? Who you gonna call? 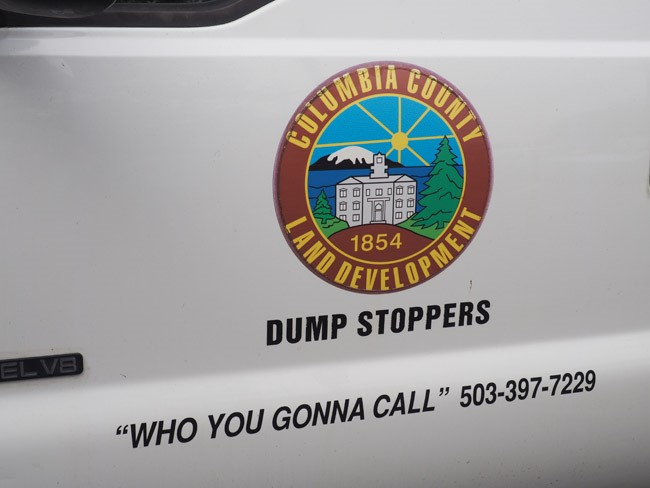 DUMP STOPPERS! I have chanted “dump stoppers” every single time I heard the Ghostbusters theme this past month which ended up being more often than you would probably believe, sometimes in public. It also works as a variant of that charming song of our youth, Diarrhea. “When you’re out on a date and your ass begins to quake, DUMP STOPPERS cha-cha-cha.” 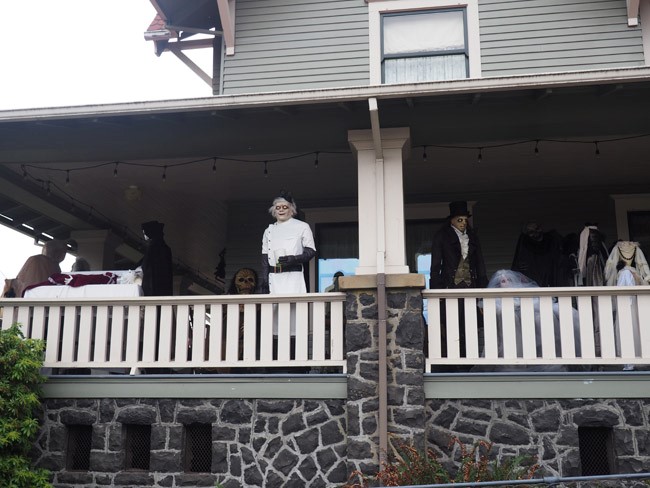 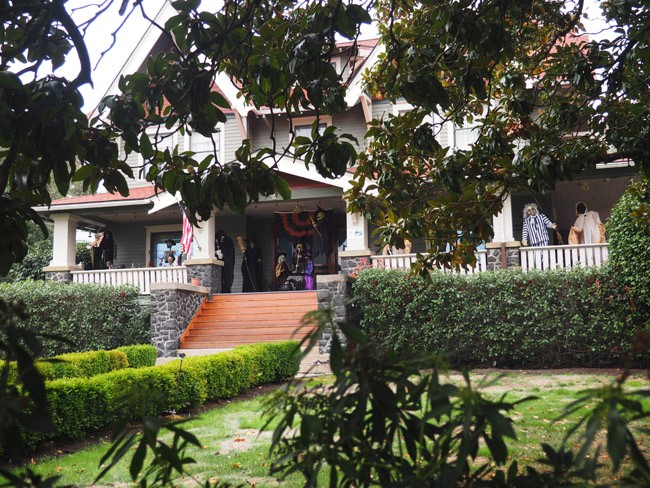 All in all, it was really cool to see how this entire town pulls together to celebrate Halloween, whether it’s by supporting the main events at city hall, offering festive treats at their restaurant, or decorating their yard. I’ve often thought it would be neat to live on a street where everyone goes all out for Halloween, the way that some streets get a reputation for Christmas decorations. But since St Helens would be a hell of a commute, I’ll just have to be the change I want to see in my own neighborhood.

A visit to Funko Pop Headquarters in Everett, WA