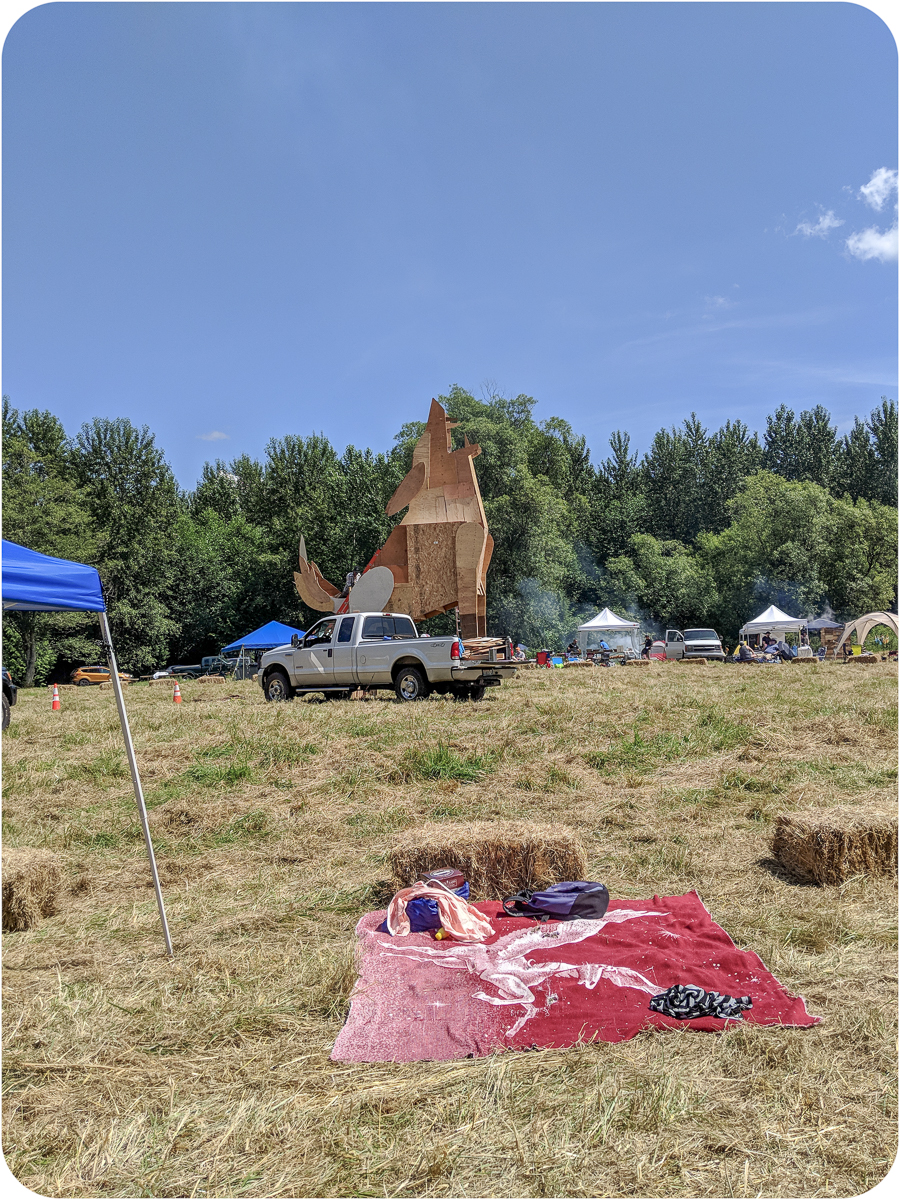 “Welcome to the world’s best feast in a field!” Held annually at Smoke Farm in Arlington, Washington, and organized by chef Tamara Murphy, Burning Beast celebrates all things carnivore, inviting chefs to compete with one another for glory and a plaque with a skull on it. Each chef is assigned a protein, but it’s up to them how to prepare it to stand out from their peers and win the accolades of the 500 hungry attendees.

This was the first year I was able to get my hands on tickets (they typically sell out in minutes and though I purchased my tickets in a harried frenzy, this year they appeared to still be available on the date of the event itself), and I was eager to experience the beefy bacchanal for myself. The chefs generally arrive the previous day, camping at the site and preparing for the event. Ticketholders are invited in at 3pm, with the dinner bell ringing at 5pm or thereabouts. As ticketholders arrive, they’re handed a menu for the evening and a station at which to start.

We arrived around 3pm and spent some time wandering the grounds: walking to the river, checking out the creative ways chefs were preparing their dishes: roasted on a spit, buried underground, strapped to a rack above a cinder block pit with a vintage chrome car grill mounted to the front. Above it all loomed The Beast, a giant plywood coyote that would be set ablaze at the end of the day’s festivities.

Our chairs were parked near some Burning Beast veterans (whom we’d both worked with indirectly at some point in the past: games are a 135B industry with a teeny-tiny social circle) who’d helpfully explained to us how it was all going to go down. All too soon, the bell rang. I was to start at the salmon, and Jason with the lamb. I had seen the salmon cooking on posts, the accompanying bread grilling on a grate over hot logs and I was definitely ready to put it in my mouth. The sole dish that I knew I would not be queuing up for was the octopus, as I personally feel it’s unethical to eat them (too smart, no bargain with humanity), but that left me with a whopping 14 other dishes to try.

The lines were huge but moved snappily, and once you’ve visited your starter station, you’re free to select a line at will, with many people choosing to eat the dish they got from the previous chef while waiting in the next line. I personally found the food to be a mixed bag. The salmon was sadly unremarkable, nigh-flavorless and wetly lumped on a piece of bread so hard and cracker-like it was difficult to bite through. While cleansing my palate with the lamb dish, I then entered the line for the rabbit tinga tostada, but when I got to the front of the line and saw that the dish was cilantro city, with a cilantro tortilla and a cilantro queso fresco, I passed owing to my passionate distaste for the herb that tastes like chewing on soapy tinfoil and declared it was duck season instead.

The duck wings were deboned and stuffed with a mixture of chicken and pork along with what appeared to be glass noodles and served with a side of pickled veggies and were excellent, one of the standouts of the day.

“Who wants a rib?” I eagerly volunteered, accepting what I thought would be a pretty special morsel that turned out to be…not, when the meat on the bone was slippery and chewy, but not chewable.

The catfish was perfect, flaky and crisp and somehow fried on a barbeque grill, because Dana Neely is a chef, and I suspect, a wizard. The catfish got my vote for Best of the Beast: it was just that magical.

I also tried the turkey tails, which is a part of the turkey that I had never eaten nor heard of before. It turns out to be a gland that attaches the turkey tail to the body and is filled with oil that the bird uses to preen itself: fatty, delicious, and the USA mainly exports theirs to the Pacific Islands. Dylan Giordan cooked his turkey tails on cast iron skillets above the fire until they were crisp and golden and delightful.

While watching the chefs cook, I did occasionally wonder how the amount of food they were cooking was intended to feed 500 people, but assumed the chefs knew better how to dial in the correct amount so that everyone would get to try everything. This assumption was incorrect and items that ran out early included the tuscan beef, the pinakbet, and the corn, that last which, unlike having to slice off 1/500th of a side of meat, seems countable. I was only able to try seven dishes before I tapped out, and maybe chefs take stomach capacity into their calculations, too,  but running out of food early makes ticketholders have to play a game of weighing what they think will be most popular so they don’t have an option taken from them and/or encourages them to pound down their food as fast as possible. It feels both in-line and out of line for the event: it’s first and foremost a feast, primal, meat and flame, but so many chefs cook with a nose-to-tail mentality and with sustainability in mind that eating as much as you can as fast as you can feels like it runs counter to that ethos.

Still: stomachs were filled, votes were cast, the circle was cleared, and the beast set afire, howling smoke and then jets of fire at the sky, finally collapsing into a flaming pile as people danced and digested and the sun set.

I’ll give you $10 for the lightbulb hut. 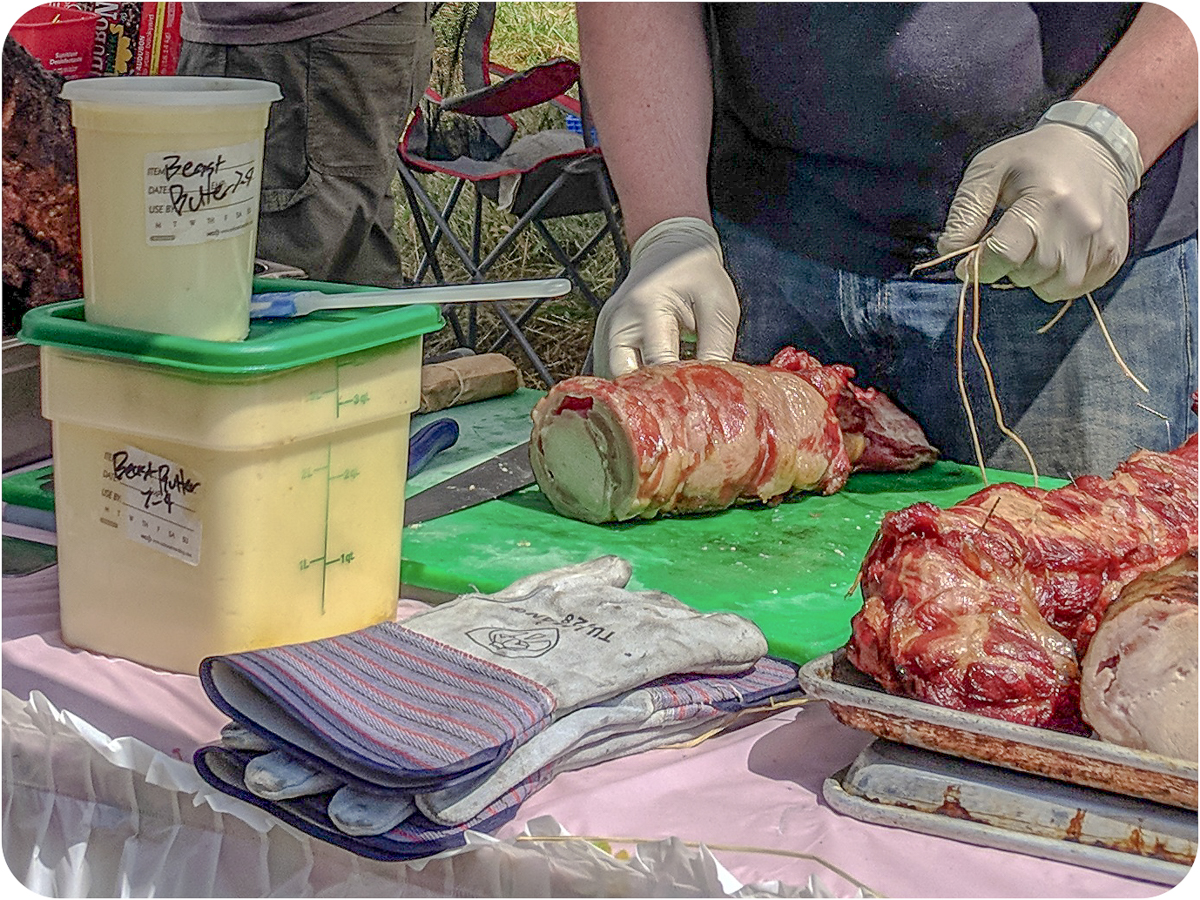 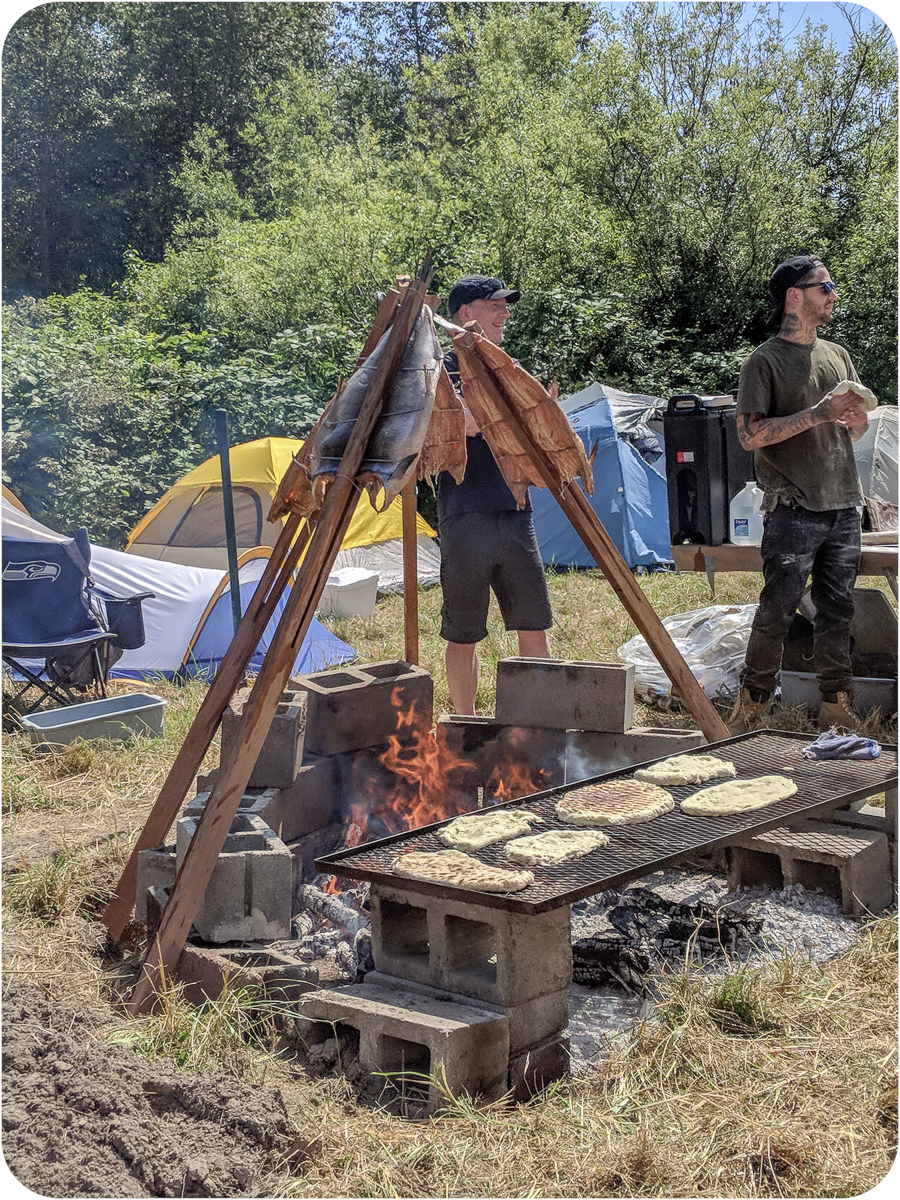 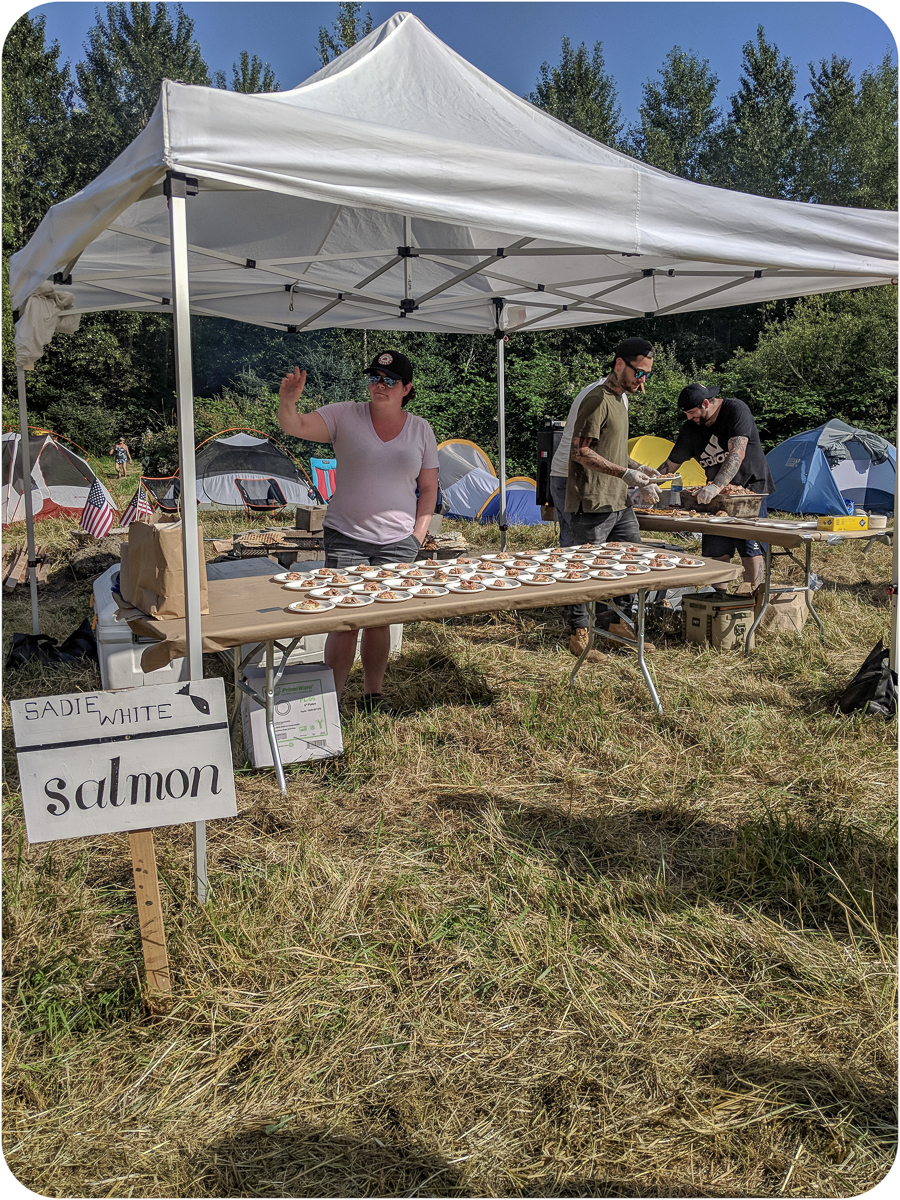 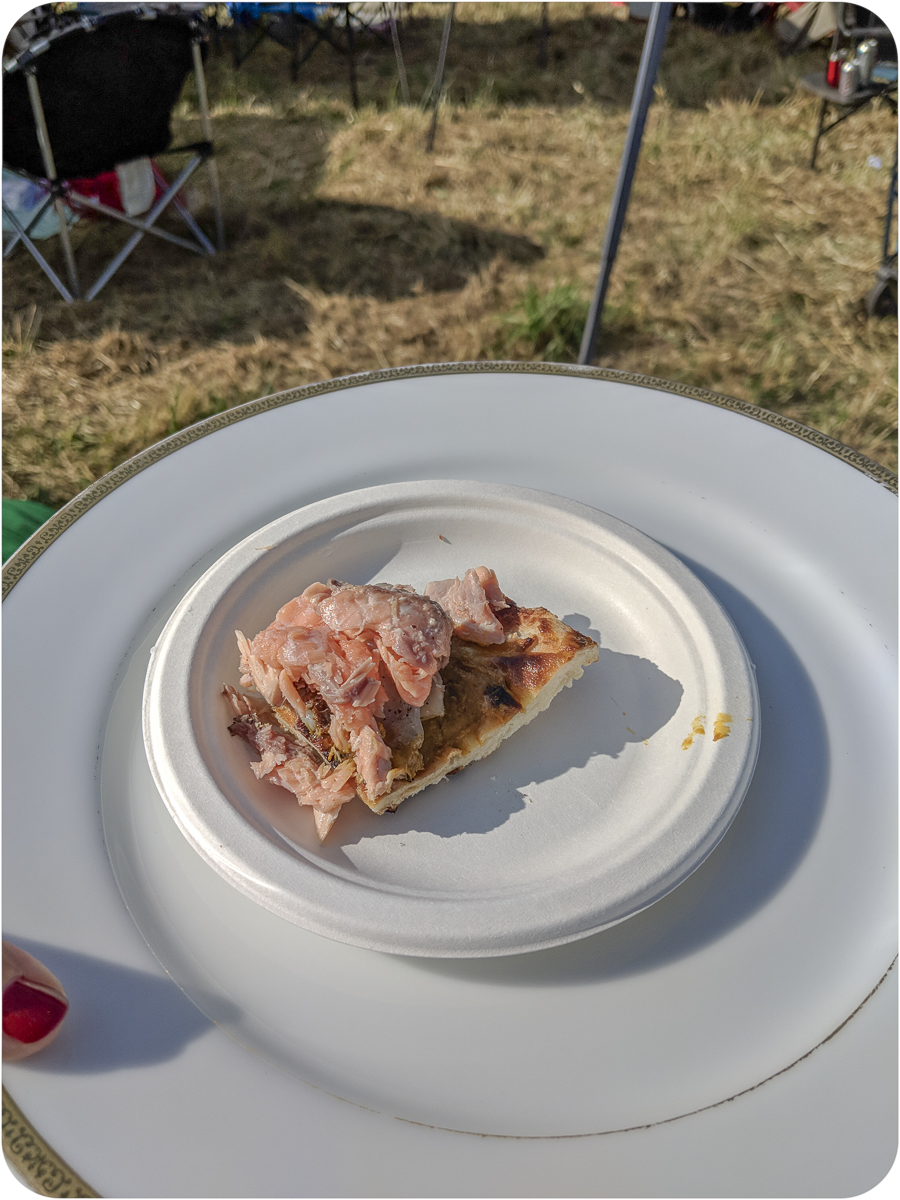 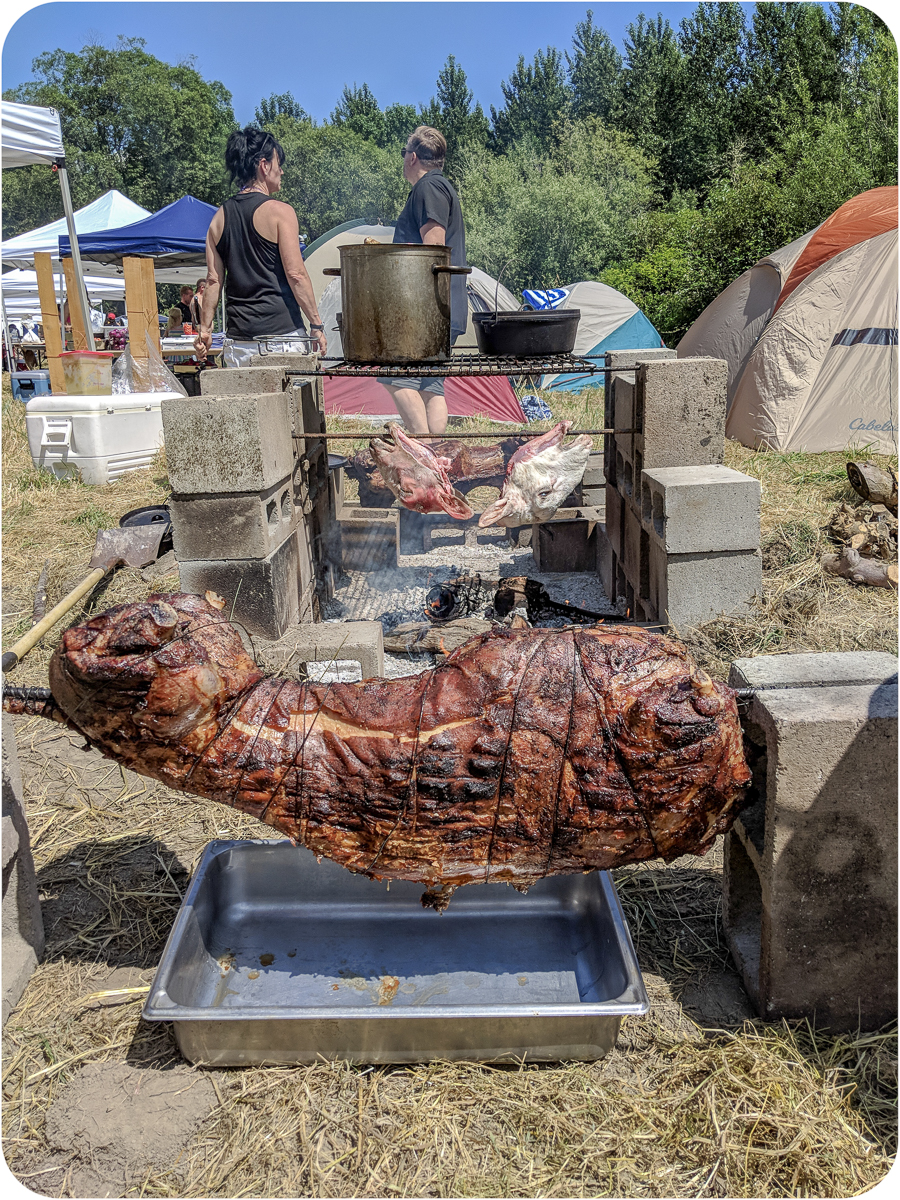 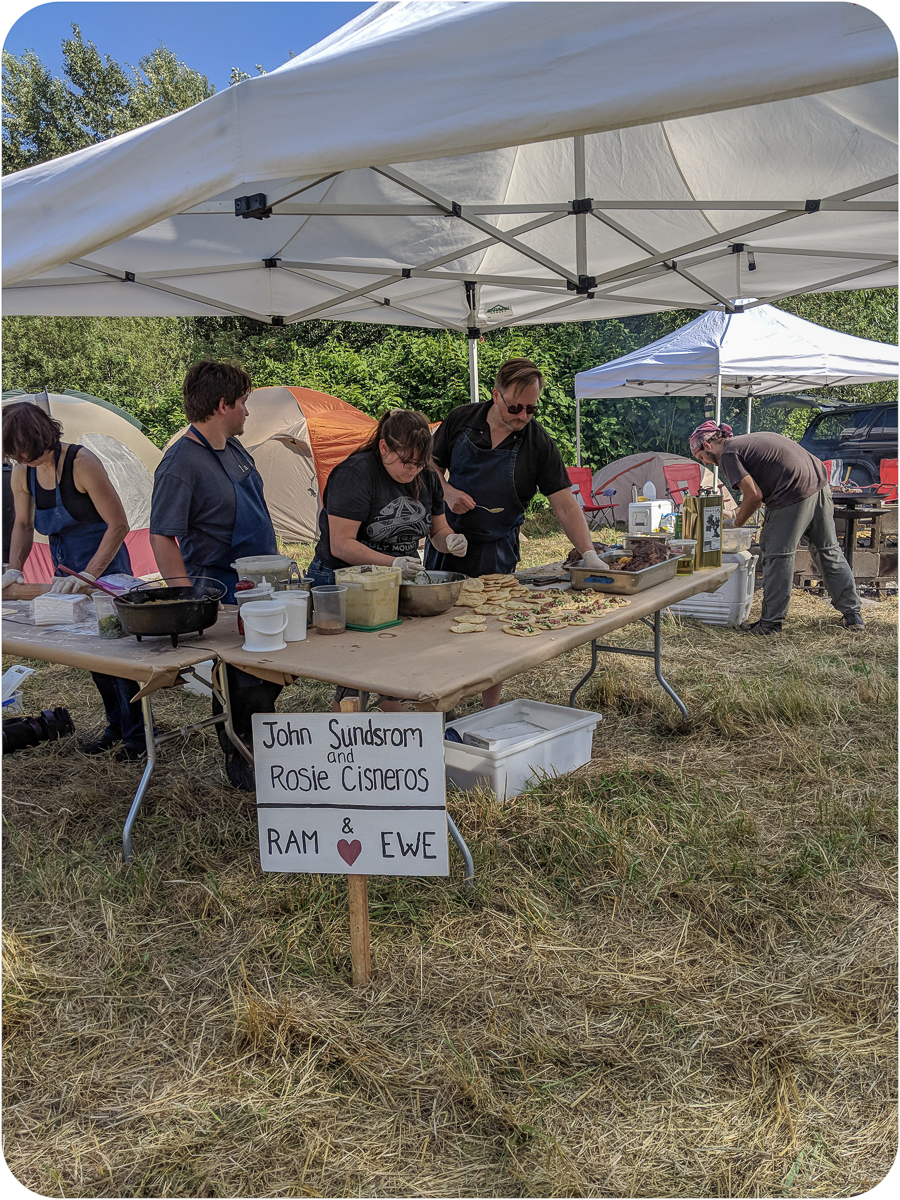 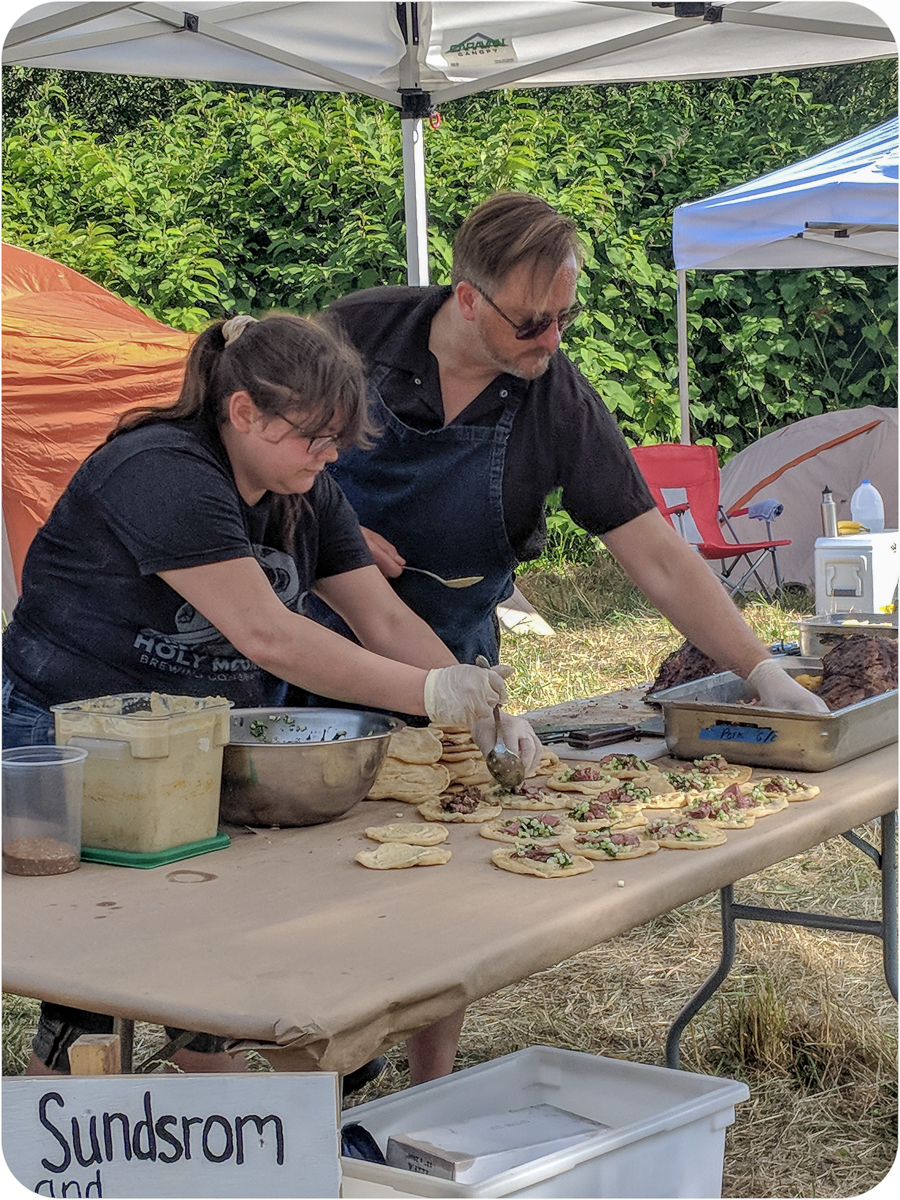 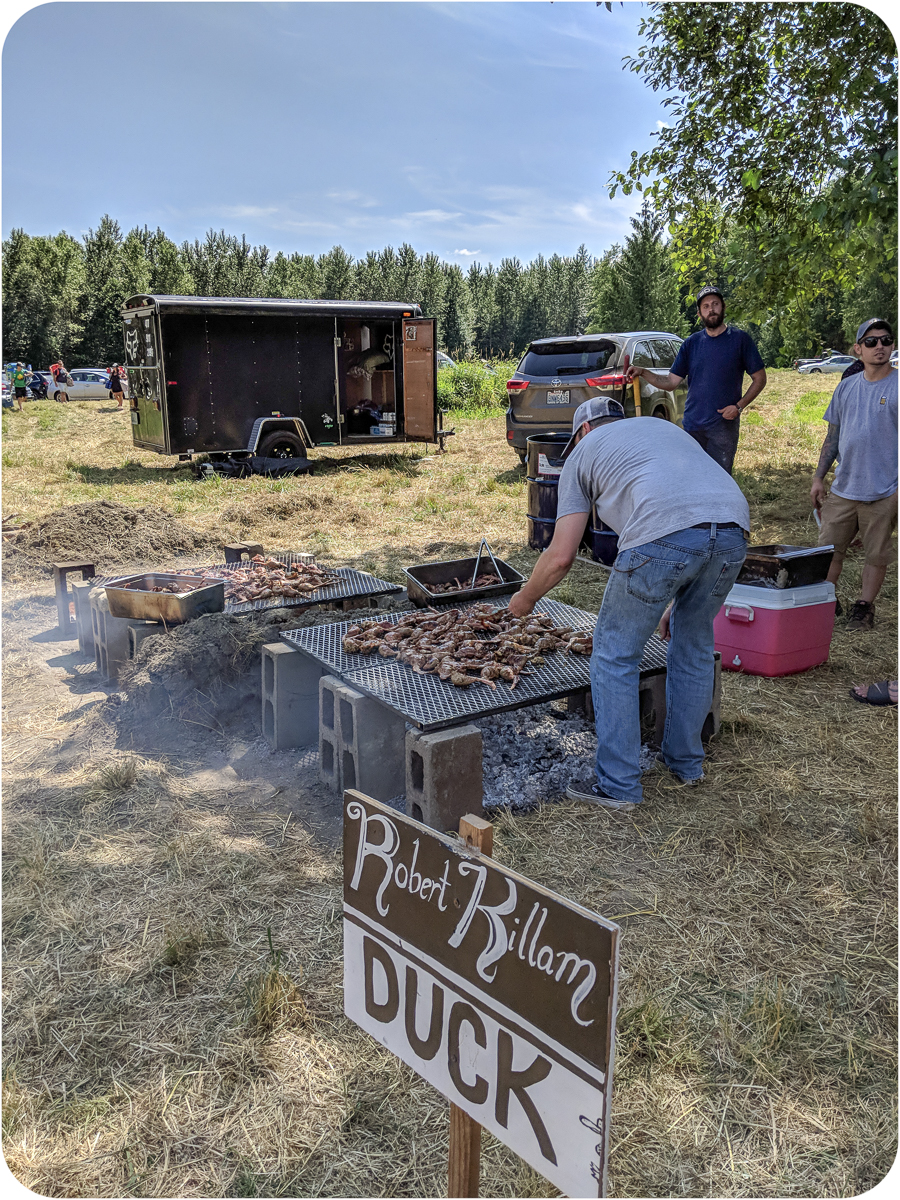 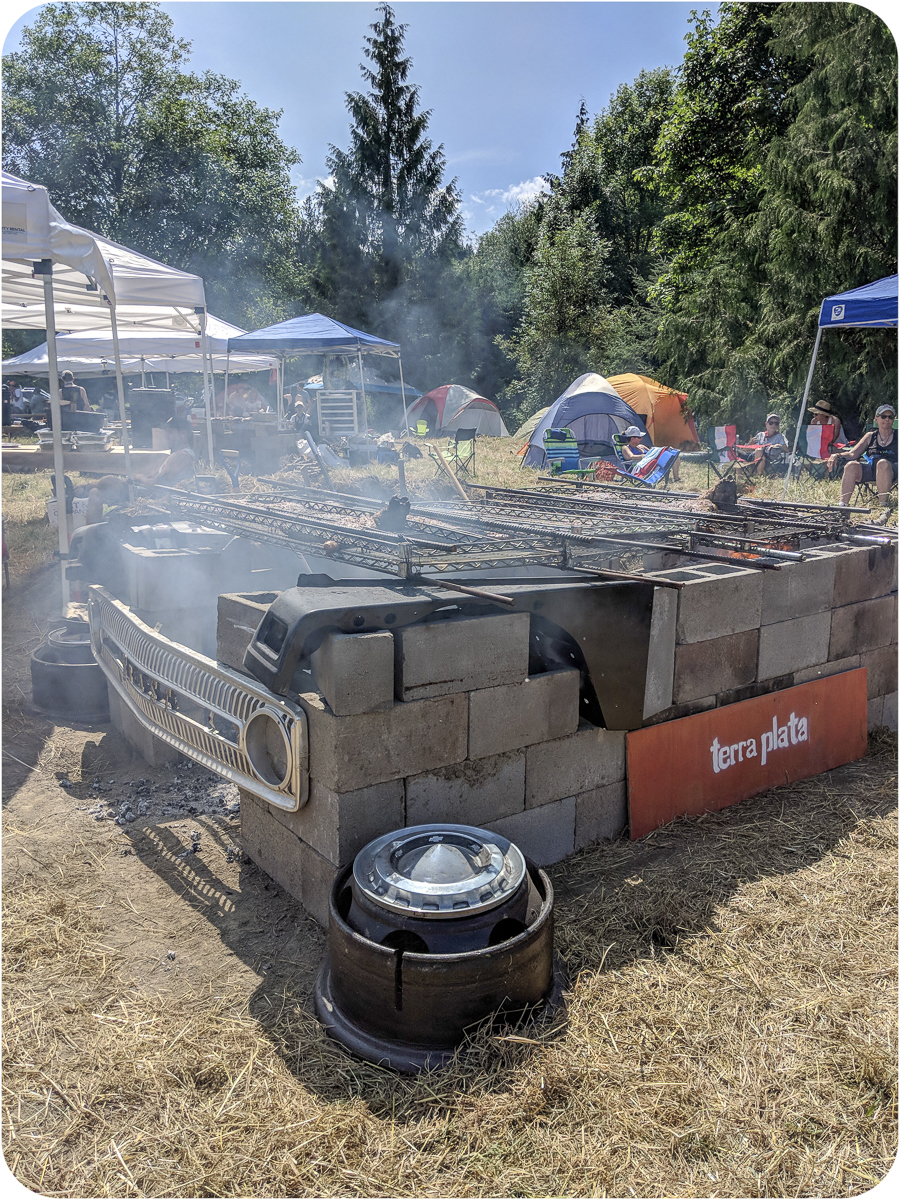 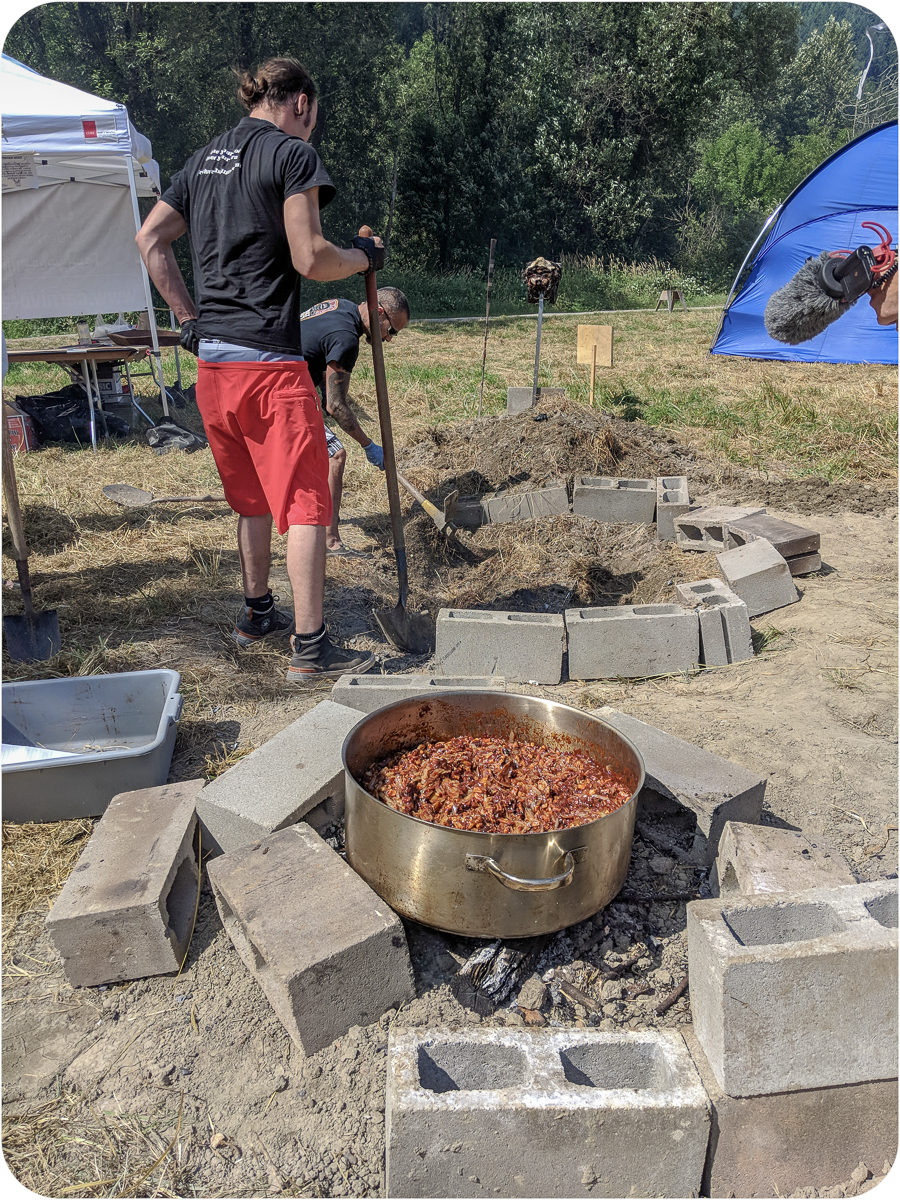 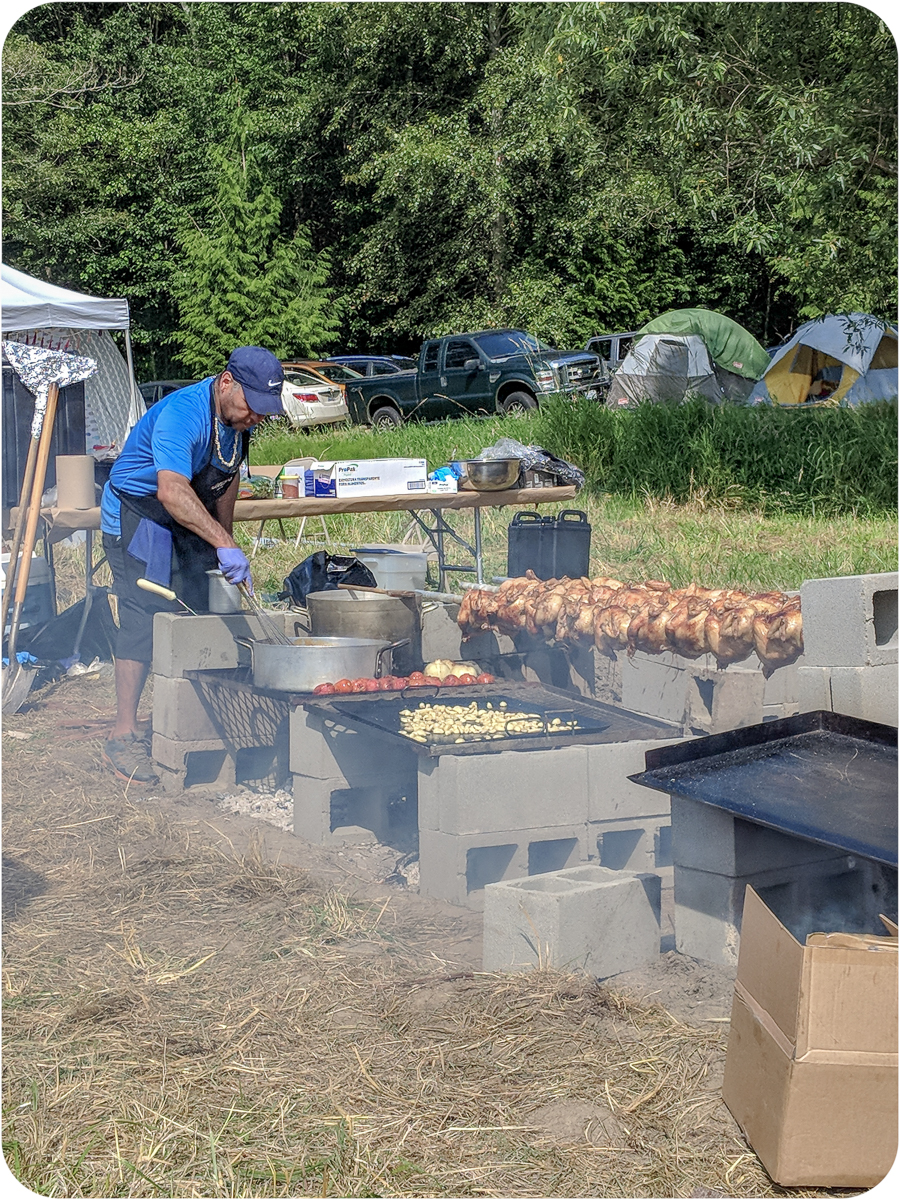 Chicken by Jack Timmons. Last year he took the trophy with his brisket and told me that if you win, next year you get assigned chicken. His chicken was bathed in mole for tacos, with a small snowy mountain of cheese. 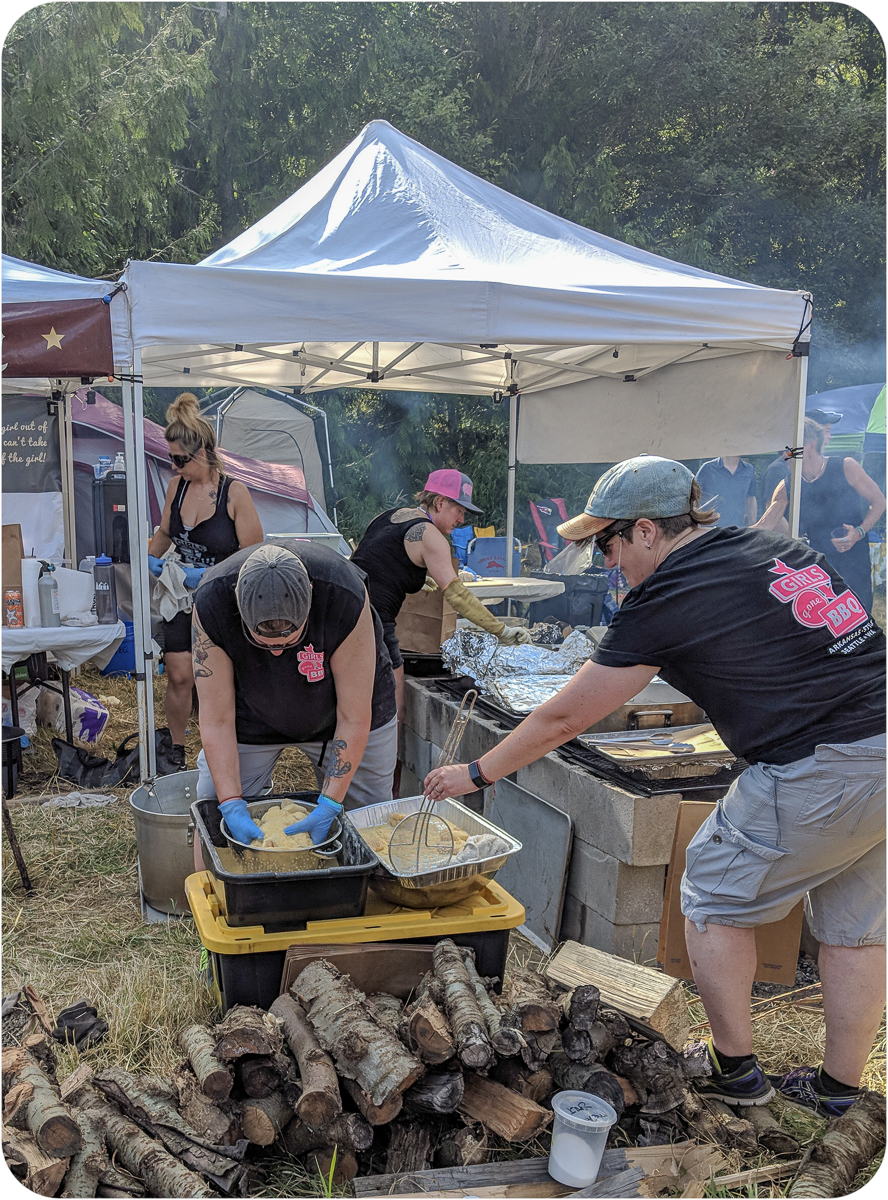 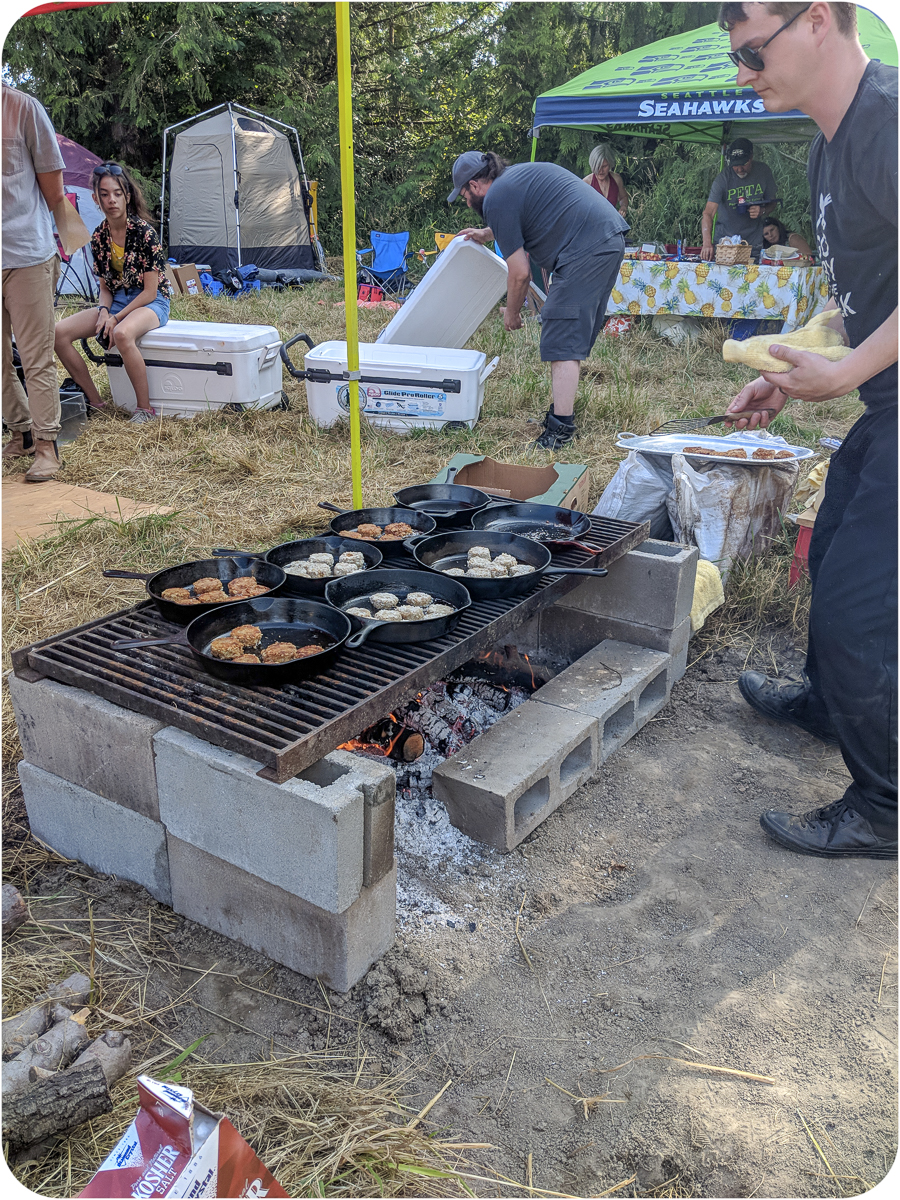 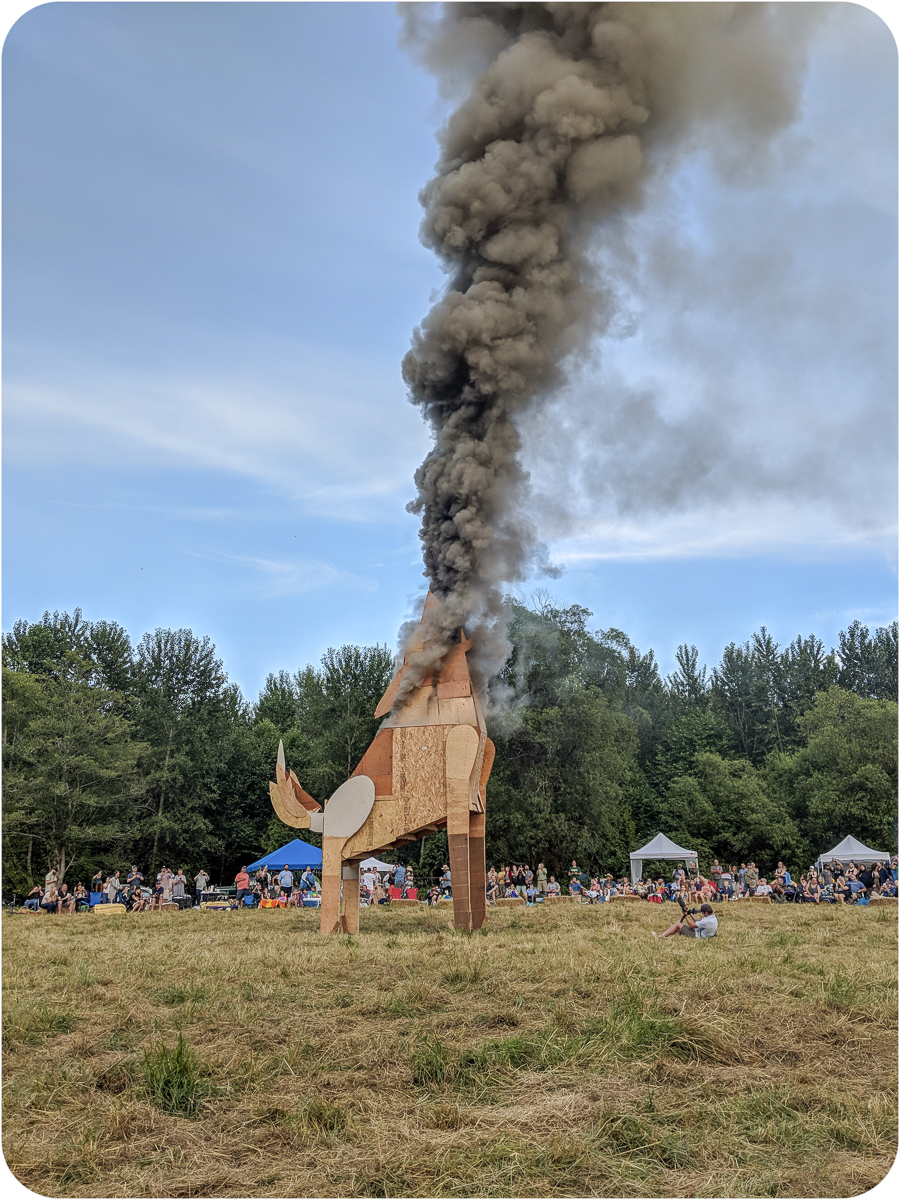 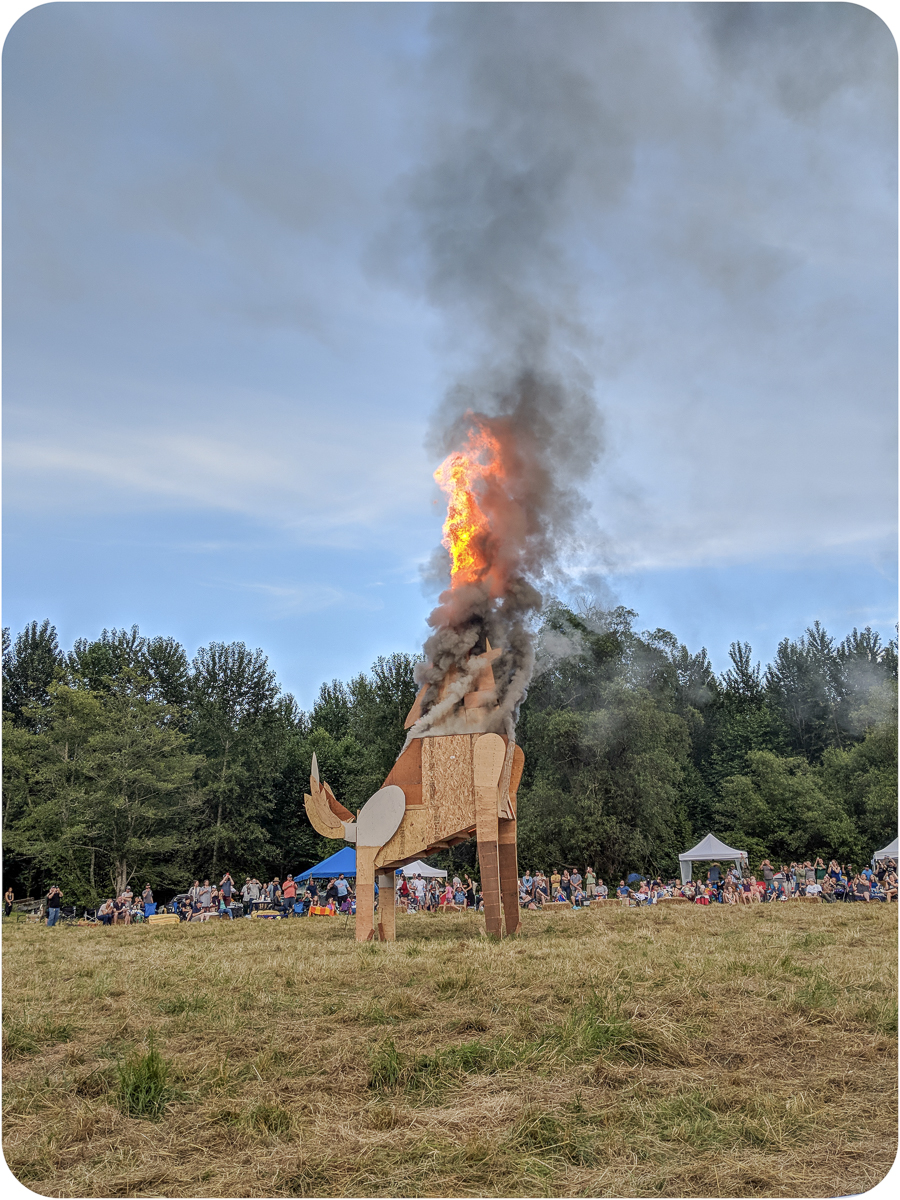 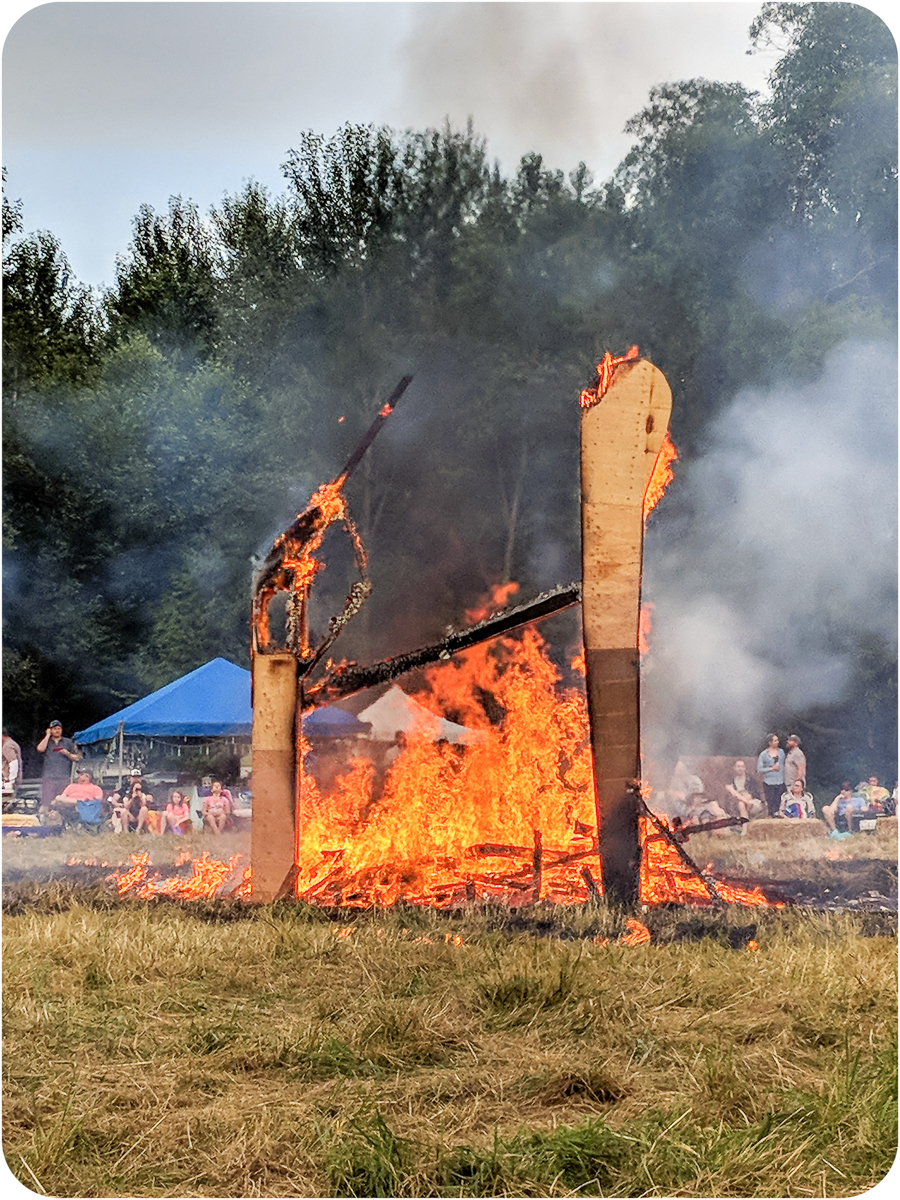 A Cruise to Tillicum Village

The Pit Room in Houston, TX