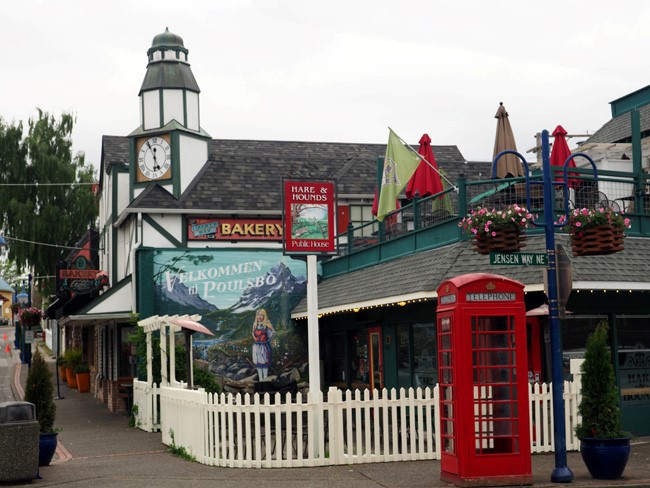 As someone who enjoys traipsing about from festival to festival, I’ve spent a good deal of time thinking about what makes for a good festival versus one that’s mediocre or just plain sad. My general rule of thumb is that for a festival to be really good, it needs to be intrinsic to the identity of the area it’s being held. You need to be able to say, “YES, it totally makes sense that they’re holding this event here.” Like the lavender festival in Sequim. It needs to be an experience that you can only have there. It needs vendors with unique offerings that are enthusiastic about the theme. Otherwise, you end up like the sad strawberry festival in Bellevue, where you go through a parking lot clusterfuck only find a couple of sad strawberry offerings and booths filled with the same insurance and home repair people who are stuffing your mailboxes full of ads that you immediately chuck in the trash. Sure, someone might come out and protest it for some reason (I never realized the lord was so opposed to strawberries) but there isn’t much there to delight people or entice them to return. When I arrived in Poulsbo for the Viking Festival, I knew I was going to have a great time.

Poulsbo was settled by a community of Scandinavian immigrants because the area reminded them of home, and now with its rows of cute colorful houses, it definitely looks the part. Poulsbo is a city that lives and breathes its Scandinavian heritage, and it’s only right and natural that they’d have a viking-stravaganza one weekend a year–it’s so enthusiastic that I’m just surprised it doesn’t involve raids across the sound. Nearly every shop on their main street is viking related, from Thor’s Hammer and Needle Tattoo to The Nordic Maid to Viking Brew to a bookstore focusing on Scandinavian topics to a market filled with special imported foods, the pride in Poulsbo runs deep. 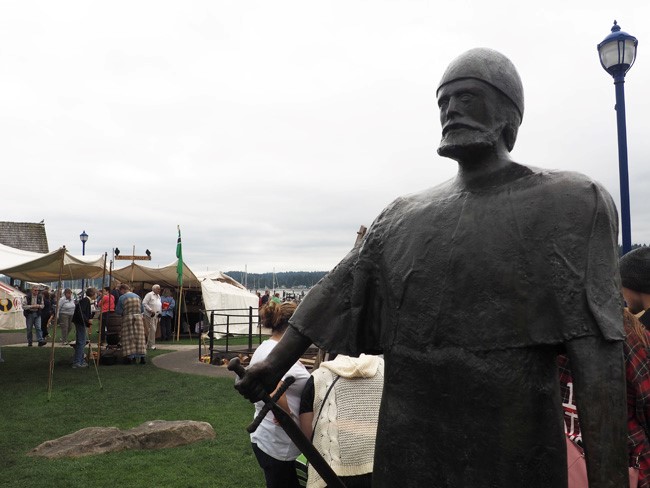 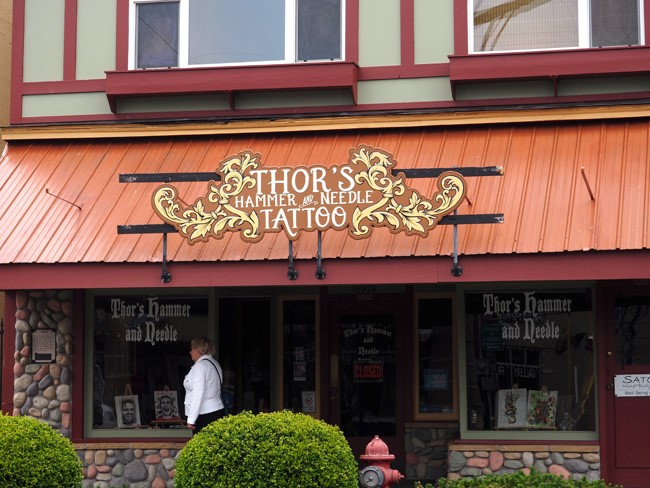 If you think Thor’s hammer is impressive, wait until you see his needle Skeradreparekkr–it can piece twelve dudes through the midsection all at once. Or one very lucky lady. 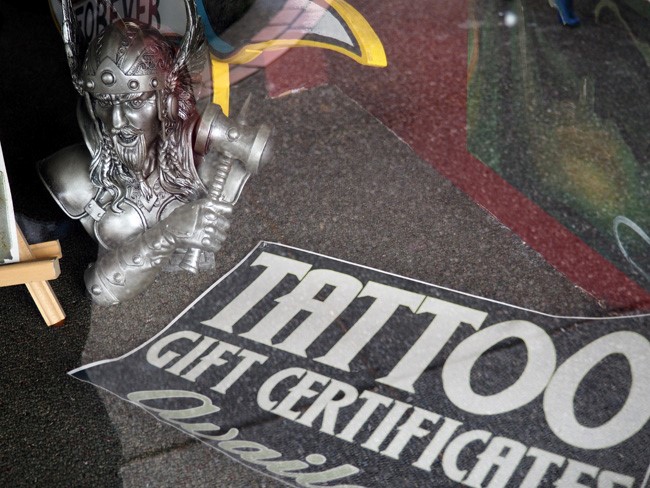 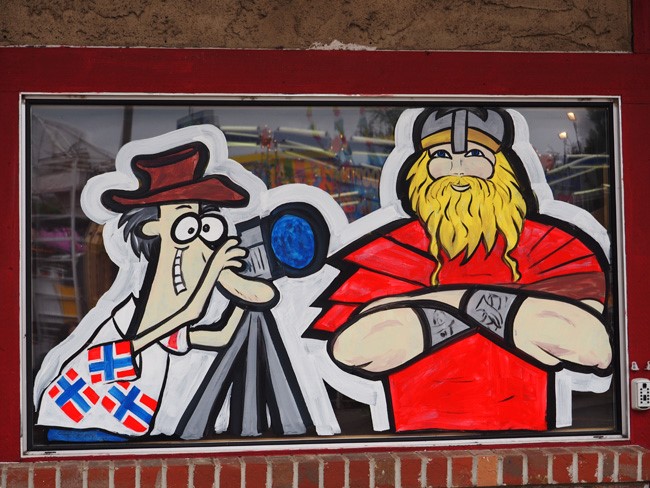 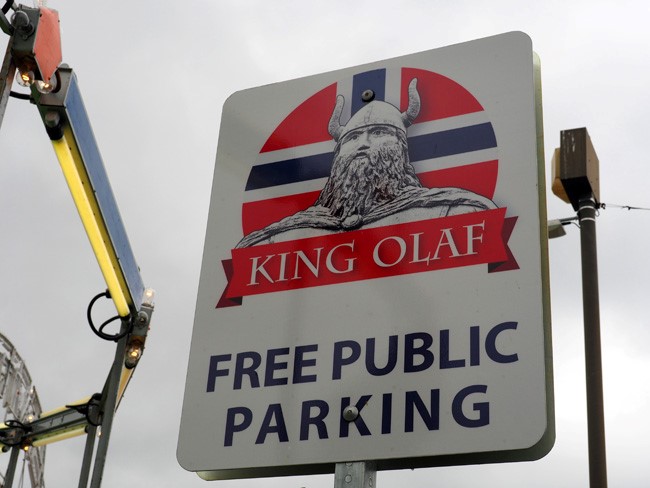 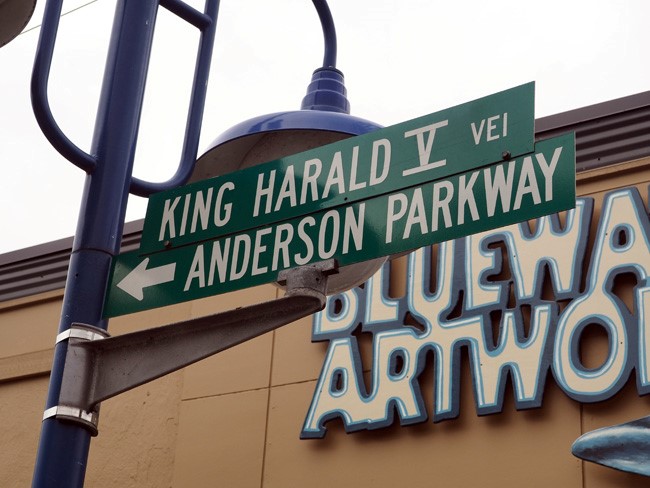 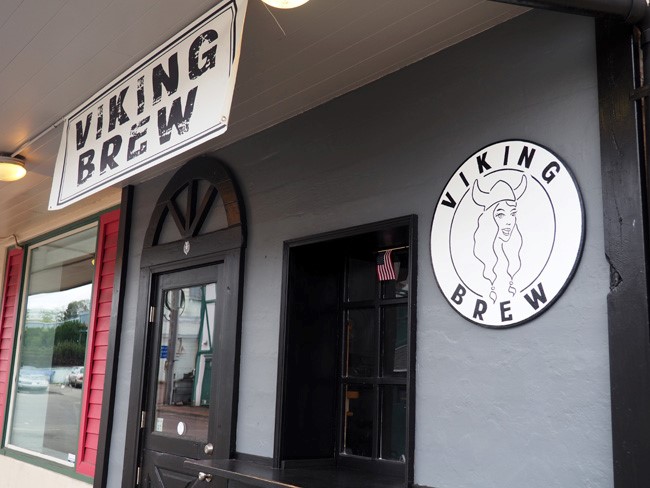 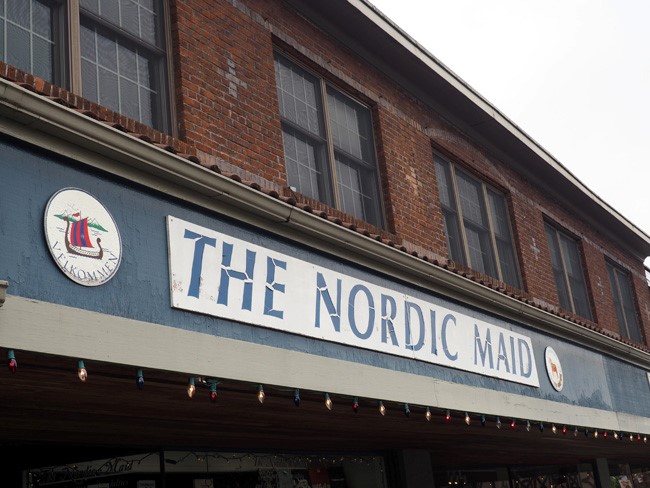 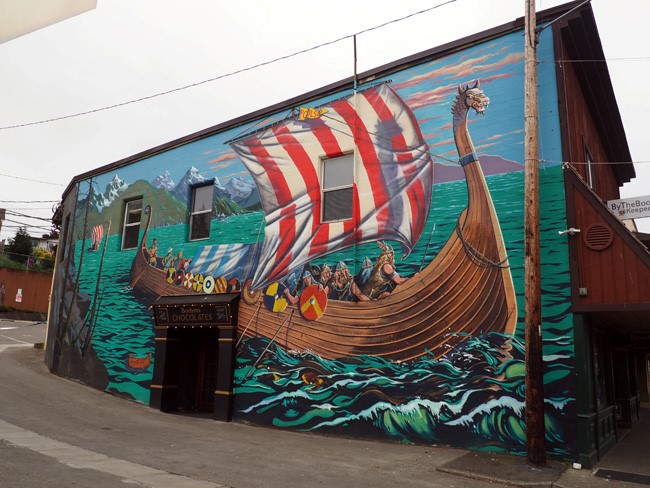 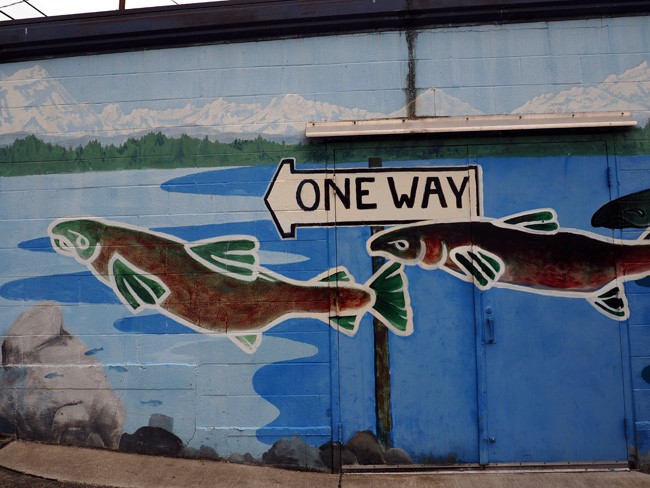 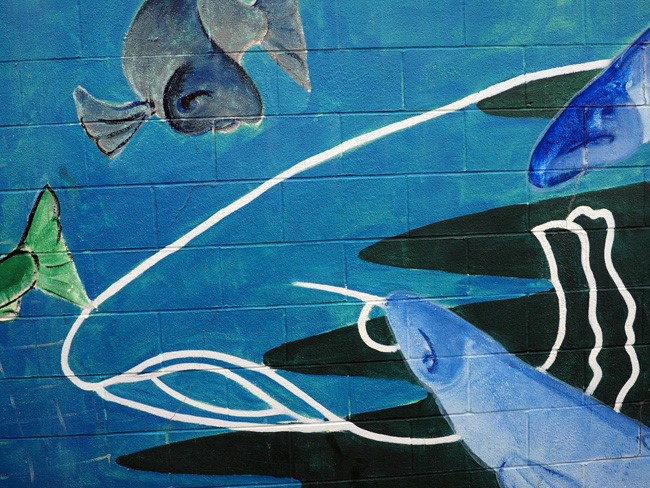 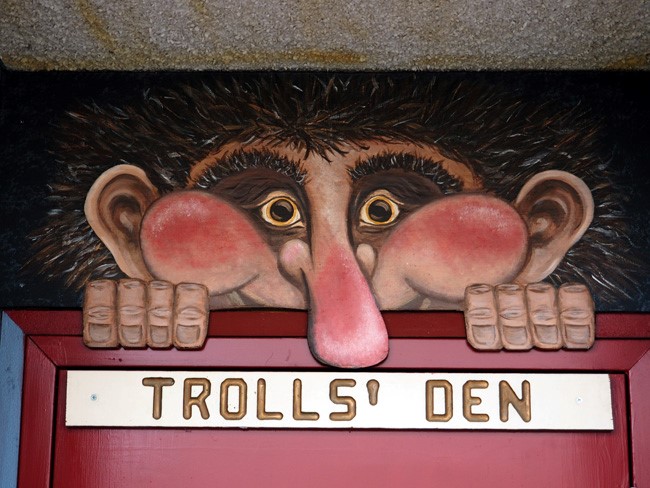 There were back-to-back eating contests the entire second day of the Viking Festival. First donuts, then oysters, then lutefisk. It comes as no surprise to anyone that the greatest number of competitors came out for the donut contests, which were separated into multiple divisions: young children, slightly older children, under 18, adult, and a Guinness world record attempt. The first two groups were judged on the speed eating of one donut. The under 18 and adult division had to speed eat three donuts. The Guinness attempt? Only one donut. One three pound donut. 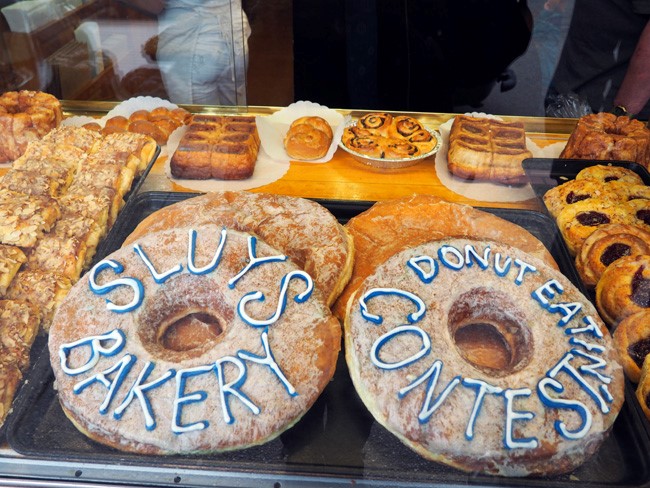 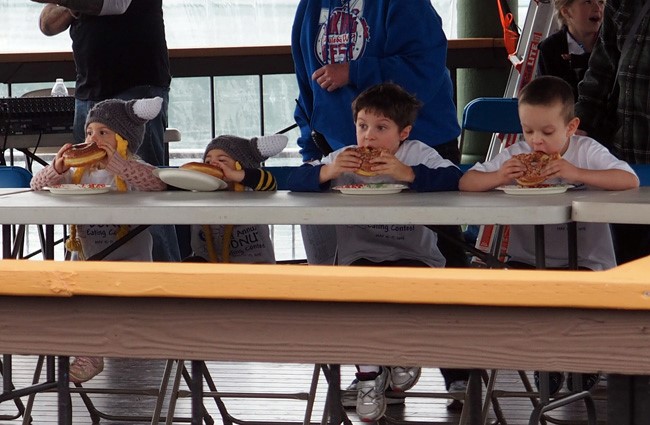 Those knit viking helmets are the cutest f’ing thing, and I want one, even though it won’t look half as cute on me. 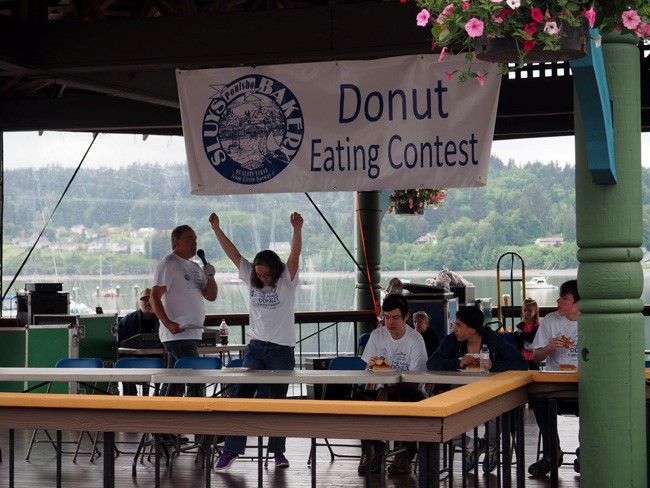 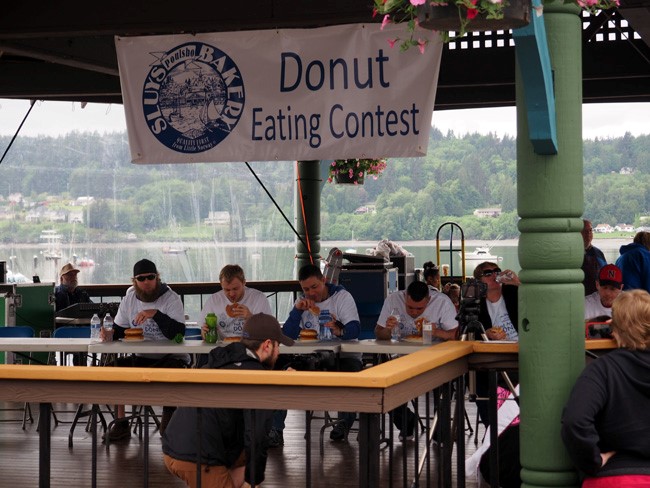 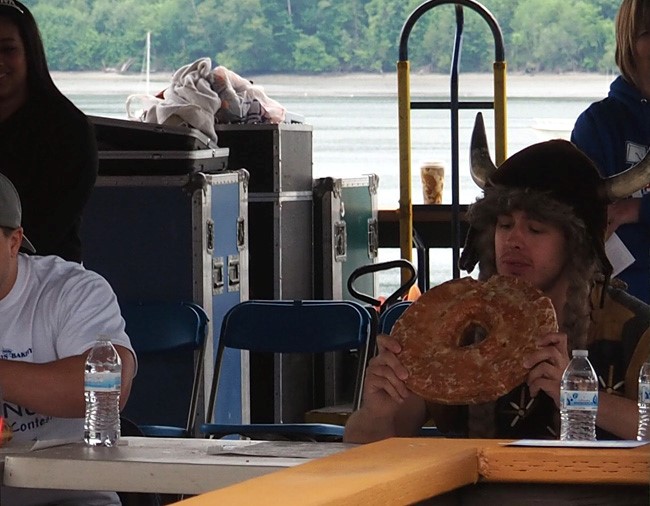 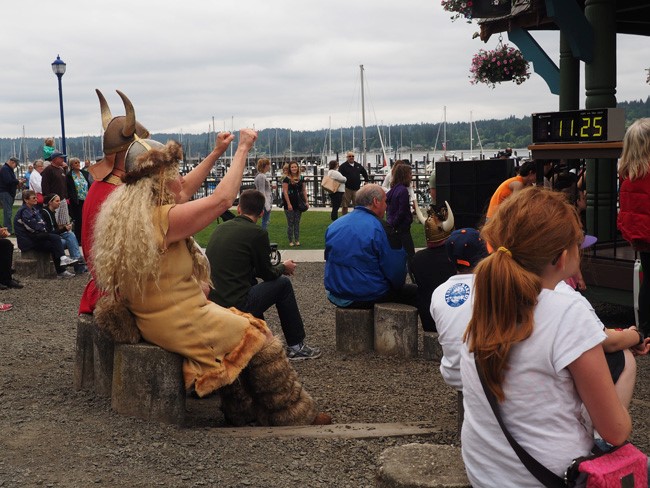 I think it was a huge misstep to not advertise that the final competition was a Guinness attempt or the size of the donut involved. The people who signed up clearly had no idea what they were getting into. They weren’t professional eaters (and that’s fine),  but nobody just shows up off the street ready to eat a three pound donut on a whim! The person who came closest to finishing hers said that she had gone to Burger King beforehand, and that all she had wanted was one donut. That, to me, doesn’t sound like someone who was ready to try to be the fastest person in the world to eat a three pound donut. Over the course of a grueling hour and fifteen minutes, the people who signed up were harangued by some local radio personality to keep going, to finish the monstrosity in front of them. It’s rare but not unheard of for stomachs to rupture, and I think it’s irresponsible to peer pressure people who aren’t prepared for the challenge in front of them. Not only was it rough on the contestants, but it was also a slog for the attendees–how long can you sit and watch someone halfheartedly eat? I walked away, did some stuff, came back, and the contest was still going. They eventually cut for time because no one had finished and now it was significantly delaying the rest of the day’s events. 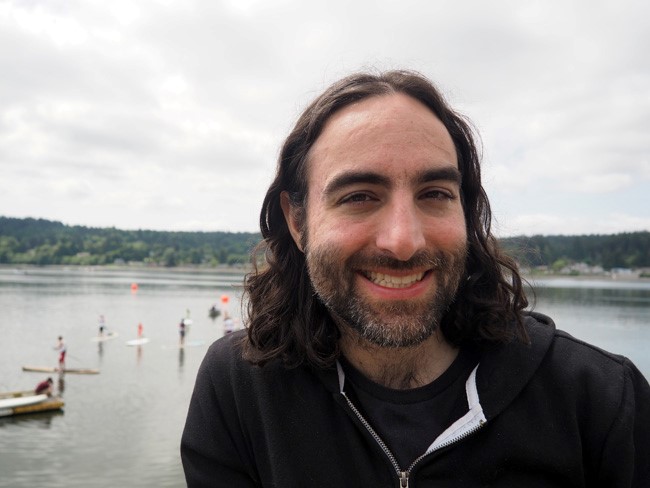 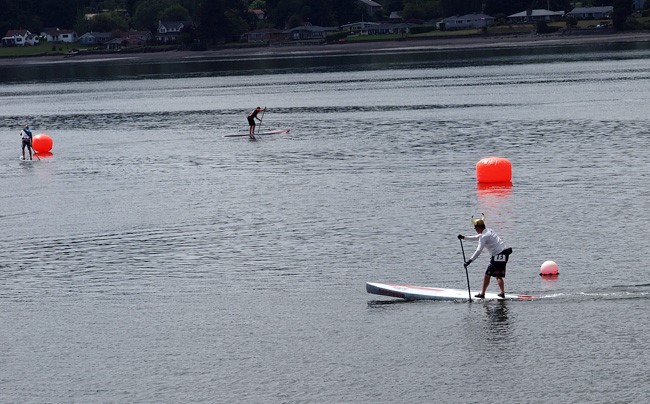 There were a surprising amount of people signed up for the stand up paddleboard races. They had two races: one was one mile, and the other was five miles. The mile race took just under 23 minutes for the last competitor to cross the finish line, so I didn’t end up sticking around to watch the five mile as there were other things I wanted to see and do while I was in town.

The Rest of the Festival 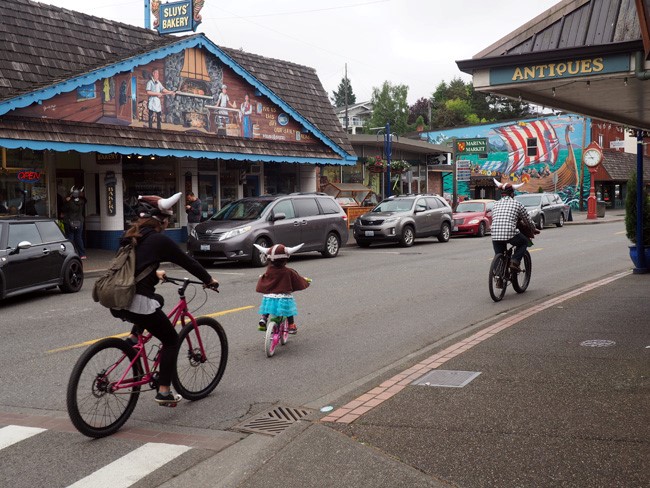 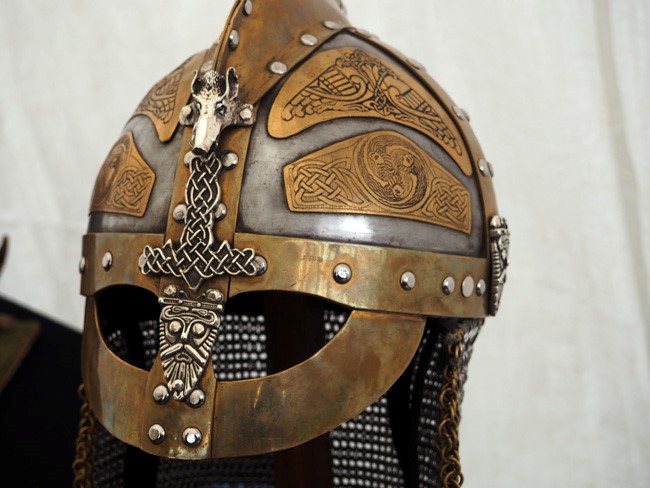 In addition to all of the eating contests and paddleboard races, there were a few different bike rides, a viking crafts center with metal and woodworkers, an area filled with replica nordic jewelry and tools for sale, a place where you could learn a bit of sword and shieldplay, and of course, some places where you could buy food, drinks, and some various trinkets, including something called “viking chips” which is a fried spiralized potato OH I GET IT, IT’S A PUN.  I think the only other thing I could have asked for would have been more viking stuff for sale, because after seeing a bunch of people walking around in them, I really, really wanted a helmet and the only ones for sale anywhere were the cheapo plastic jobbers. I so wanted to slap that helmet with the badass metalwork above on my head and mosey on out of the tent, but it didn’t seem prudent, what with there being armed vikings everywhere. Next year, I’ll be back, with golden braids down to my ass and an appetite for a three pound donut.